Where No Brand Has Gone Before

We might never know what space sounds like if it wasn’t for NASA’s social media marketing strategy.

After auditing its social audience, the government agency realized it had a built-in group of audiophile fans that it just wasn’t engaging. It seems NASA got so caught up in posting beautiful, out-of-this-world photos to show us what space looks like that they forgot people might be interested in what space sounds like. 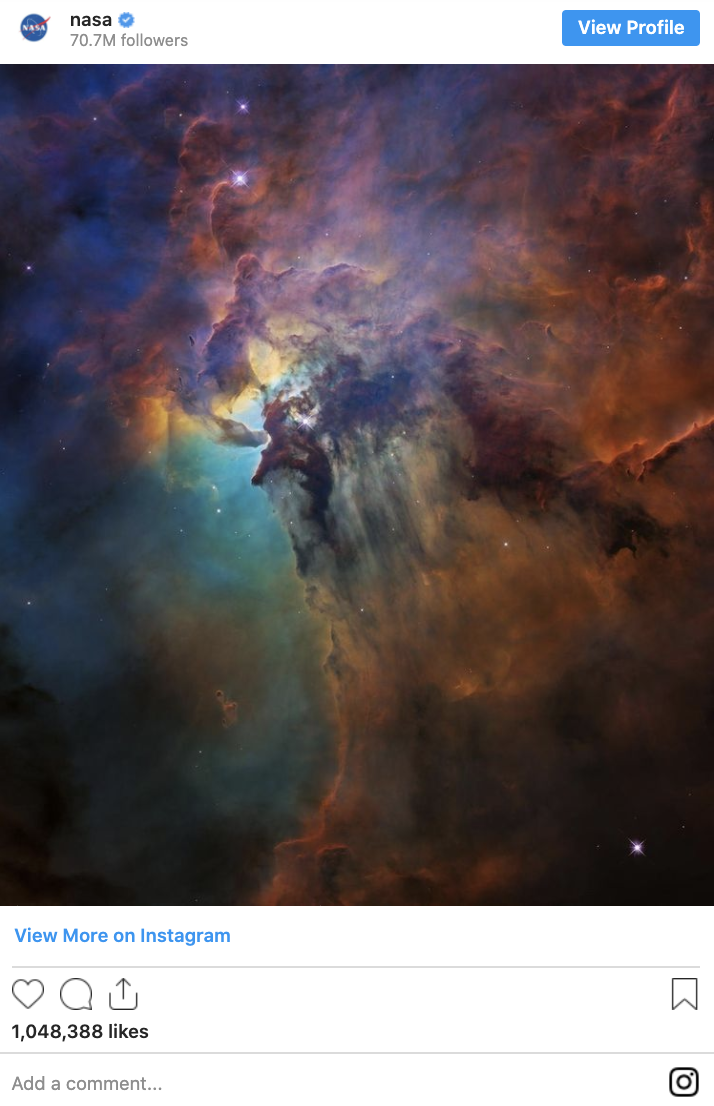 NASA fixed that right away.

“We realized that we had these audio resources, so we launched a SoundCloud account,” says Jason Townsend, deputy social media manager at NASA. “We connected with a whole new audience of audiophiles who love the sounds of space.”

This is a prime example of why NASA’s social media marketing operation thrives. The agency has a treasure trove of marketing material to work with – including content from historical missions and new discoveries that are being made today. And, most importantly, NASA always has a reason to share these resources because they’re tapping into a renewable resource: curiosity.

“Everybody has that little bit of like childlike wonderment in them,” Townsend explains. “If we can find that curiosity in every person out there and pull it out of them, then we can really engage with an audience that is interested in what we’re talking about.”

Here’s how NASA’s marketing does just that.

Want to know something interesting about NASA? Ok, there are a lot of interesting things about NASA. But this one might perk up the antenna of social media managers: Since NASA is a government agency and not a brand, it can’t actually promote any of its social posts because that money would come out of taxpayers’ pockets.

“As a result, everything we do on social media is completely organic,” Townsend says. “There’s no paid promotion, no advertising, no sponsored posts, no paying for a trending topic.”

So, how does NASA drum up engagement without any paid promotion? They tap into niche communities of social users. It helps, of course, to have 500 distinct social accounts – including individual astronauts, rovers, and missions. 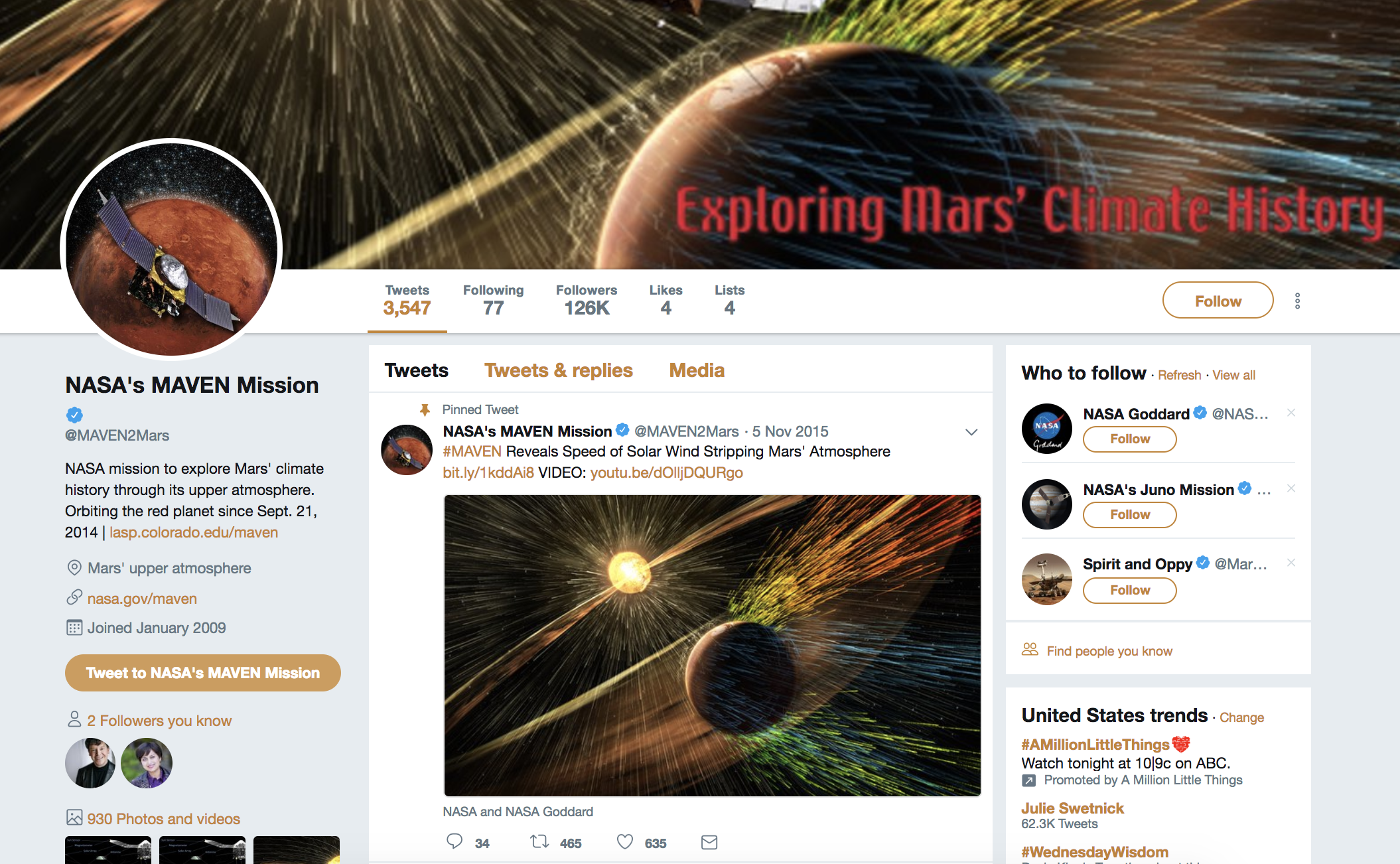 “NASA has something for everybody,” says Townsend, “from big blockbuster missions that are changing science textbooks to things that have personal impacts for people.”

NASA’s social team just has to find out what people are interested in and deliver the right content to them, as they did with the SoundCloud launch.

“Clean water is another great example,” he adds. “Water filtration systems that we’ve developed for space are now in use all over the planet and we’ve been able to change a lot of communities by providing these technologies here on Earth.”

NASA can use social media to share these stories with us Earthlings and those interested in such technologies:

Find out how we use @Space_Station tech to improve water filtration on Earth: https://t.co/XgrCTq2bV4 #WorldWaterDay https://t.co/D9qpG0p6dm

“There are tons of stories like that where we’re able to connect with these niche communities, find out what makes them tick, and continue to share news stories,” Townsend says.

Even on Mother’s Day, NASA can pull something from the archives, like an image from the Spitzer Space Telescope that, because of the infrared light, looks like a rose.

Happy Mother’s Day! Give your mom something out-of-this-world, like this interstellar rose captured by @NASASpitzer: https://t.co/1UQ5ISnUod pic.twitter.com/TjKbtb8Ohc

“We pride ourselves on finding conversations that are happening and connecting with those other audiences out there,” says Townsend. “We’re always asking, ‘What’s the next audience that we’re not currently reaching and what do we have that might be of interest to them?’”

To Infinity and Beyond Social Media

Social engagement doesn’t have to stop outside of social media. That’s why NASA’s marketing team makes an effort to meet its social community offline with NASA Social events, which have been going strong for nine years now.

“We open the doors to NASA,” says Brittany Brown, digital engagement specialist at NASA. “We give our social community a unique opportunity to come to one of our facilities, whether it be to see behind the scenes of a mission or an actual launch.”

For example, NASA just hosted its first #NoFilter NASA Social, inviting photography enthusiasts to visit the Michoud Assembly Facility in Louisiana where NASA makes its rockets. Attendees had opportunities to snap photos of the Orion spacecraft pressure vessel that will carry humans into space and unique equipment used to build components for the Space Launch System.

An amazing day touring NASA’s Michoud Assembly Facility for the first day of the @NASASocial #photowalkCannot wait for tomorrow to photograph all day! #NASASocial pic.twitter.com/0yroDOCiAz

“It inspired them to become our brand ambassadors because they were able to not just see photos and videos on Facebook and Instagram, but see these things in person and share them in real time with their platforms,” Brown explains.

NASA Socials are the gifts that keep on giving, too, since attendees go on to create their own social content and communities. For instance, visitors have launched podcasts of interviews with NASA experts, online storybooks of sketches from their experiences, and Facebook Live streams.

“People are using their creativity to share stories on our behalf in ways that we hadn’t even thought of,” says Brown. “It’s a very powerful opportunity in engagement that pays big dividends by just opening our doors and showing them what we do on a day-to-day basis.”

Houston, We Have a Problem – and We Can Admit It

As any social media marketer knows, it’s not all sunshine and starry skies out there on the Internet – even for a space exploration agency. When you’re sharing real-time updates from a major organization with millions of people across platforms, challenges arise.

That’s why it’s important to have processes and procedures for dealing with these obstacles.

To help, Townsend shared his three go-to rules for social communication – “the biggest lessons I’ve ever learned” – passed down from from Bob Jacobs, deputy associate administrator for communications at NASA:

There seems to be a theme here: Own your story because social news is fast and thorough. For instance, NASA did this recently by providing a realistic update on the Mars Opportunity rover, which has been silent since June 10 and has some worried it may be lost forever.

Clearer skies ahead?The global storm on #Mars has peaked, but it could take weeks or months for enough dust to settle that Opportunity could recharge and phone home: https://t.co/VwuuPwmOY2 pic.twitter.com/8t0Tu8FS0T

By following these lessons, NASA was able to share necessary information with the public and remain in control of the social conversation.

As the Universe Expands, So Does NASA’s Social Audience

The universe is expanding and NASA’s social audience is growing with it as the agency continues to tap into niche communities, engage users offline, and try new content formats like livestreaming on Facebook, Twitch, and Ustream.

It helps that their social team has grown, too. When Townsend started in 2012, he was the second person on NASA’s social team. Now he’s working in a group of five people, each of whom contributes new ideas and outreach opportunities.

“Every day I’m telling Jason, ‘I have ideas! I have ideas!’” Brown says. “You could really spend a lifetime exploring them because NASA is a forward-thinking organization where you have autonomy and the trust and confidence of your leadership to push the envelope as it relates to social and digital.”

Just like it’s only begun to explore the depths of space, NASA has only scratched the surface of its potential on social media as its audience continues to grow and new platforms emerge.

“It’s one of the things we really do pride ourselves on: expanding our audience all the time,” Townsend says. “We already have a lot of big space enthusiasts following us so we’re always trying to find the next audience that we want to talk to, and social media plays a big part in that.”