2022 Fashion: last quarter of the year in review

“You can create fashion anywhere in the world, but where you are crowned is Paris.”

In the last quarter of 2022, we covered top trending fashion events from New York to Milan, London to Paris, Los Angeles to Cairo, and beyond.

Starting with the fashion week spring/summer season, events happened across Europe and the US between September and October 2022. Amongst everything that transpired, Paris Fashion Week stood out, proving that Paris itself is the world’s undisputed fashion capital.

We used Sprinklr to analyze over 7 million conversations and over 20+ top fashion designers’ social accounts to capture insights into the most discussed fashion events.

Insights from the fashion week

We started our analysis by examining which city had the greatest share of voice and positive sentiment globally throughout the spring/summer fashion weeks. Of the total 7.04 million mentions recorded, Paris Fashion Week accounted for 55.32%, followed by New York Fashion Week with 37.62%. 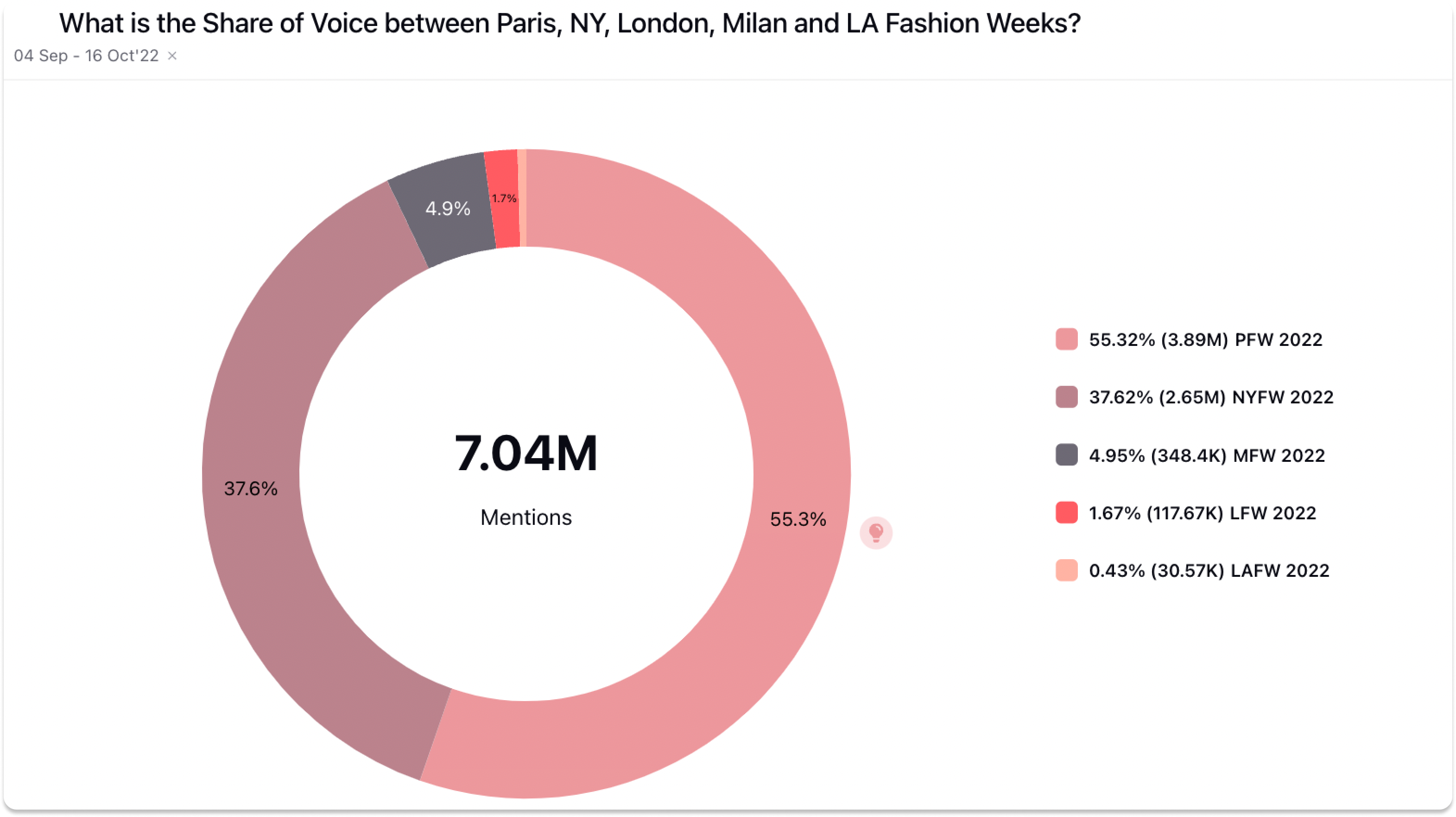 1. The iconic Fendi Baguette bag is back

In collaboration with Fendi’s Kim Jones, Silvia Venturini, Marc Jacobs, Tiffany & Co, and Porter, top model Linda Evangelista closed the show in a Tiffany blue cape. They got a standing ovation, putting the Baguette bag back in the spotlight. 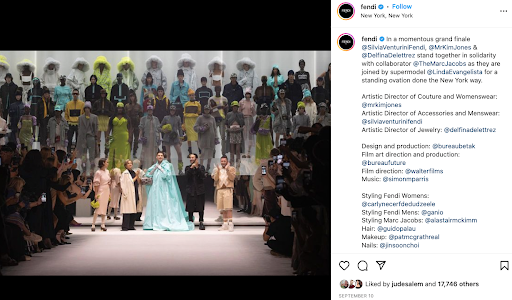 2. Victoria Beckham’s comeback on the runway

The passing of the Queen impacted London Fashion Week, as brands like Burberry and Raf Simons canceled or rescheduled their shows. However, London-based designer Victoria Beckham had planned to showcase her collection in Paris this year. She staged her first show in three years with a fresher take on minimal aesthetic and softer silhouettes.

Victoria Beckham’s show and collection were recognized as some of her best work. Victoria Beckham was the second most engaging brand after Versace. It had 7.4M likes, comments, and shares between September 4 and October 16, 2022. 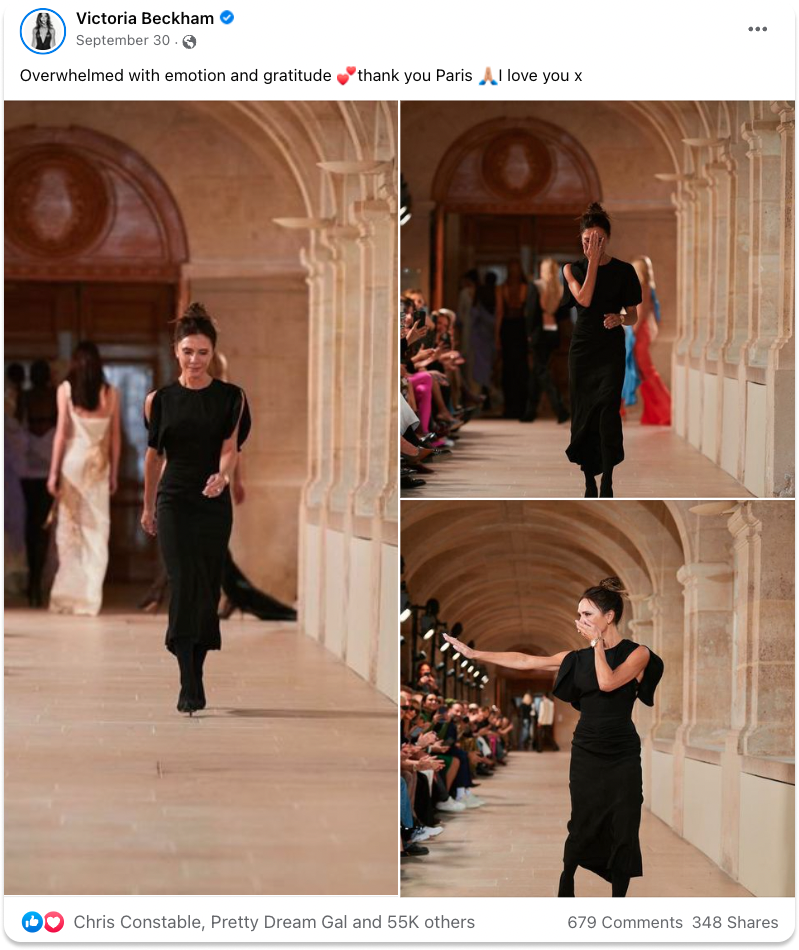 Similarly, iconic NY-based designer Ralph Lauren took a break from his home city, New York, and flew to the West Coast to host this year’s show. There’s been a recent trend of picking California as a fashion destination, with brands like Dior presenting in Venice Beach in May 2022, Louis Vuitton in San Diego, and Gucci on Hollywood Boulevard in 2021.

Ralph Lauren presented his California Dreams in Los Angeles. With over 68k earned conversations and 120M estimated earned reach on content published around the show, Ralph Lauren stood out so elegantly, with Ben Affleck and Jennifer Lopez helping them celebrate #RLSP23 at The Huntington Library. 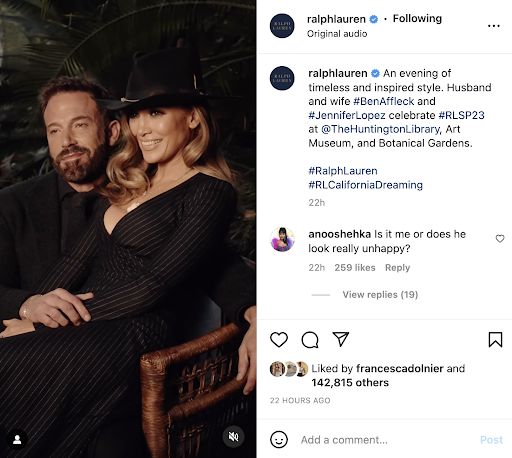 The French brand Coperni took everyone by surprise when designers spray-painted Bella Hadid’s body and created an elegant white latex dress. The audience at the show and online were awestruck, making this moment one of Vogue’s biggest moments of the year 2022 and one of the top conversation drivers around Bella Hadid. 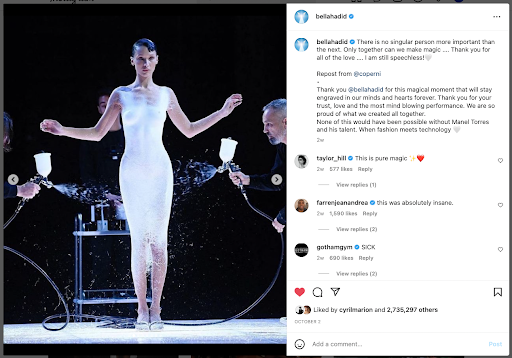 Bella walked 20 spring/summer fashion shows, including five during NYFW, one in London, three in Milan and 11 in Paris NYC and was crowned Model of the Year 2022 at the glamorous British Fashion Awards (BFA) in London in December 2022. Here are the top conversation clusters identified by Sprinklr AI-powered solution around Bella Hadid during the fashion weeks between September and October 2022: 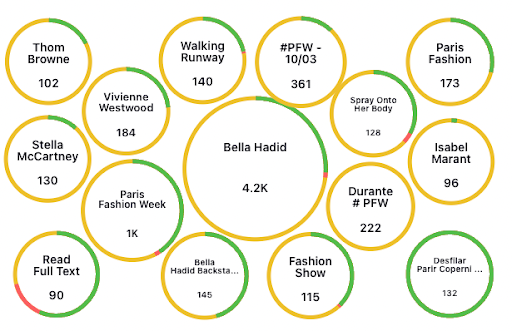 In a true Queen B move, Beyonce picked Paris to organize an exclusive star-studded party for her new album: Renaissance. It boosted conversations around her music, overall awareness, and global streams.

It has also been the most discussed fashion week on Twitter in a decade according to Sprinklr Insights. The insights are based on the year’s historical data and conversations mentioning #PFW or #ParisFashionWeek.

For Dior's Men Pre-Fall 2023 collection in December 2022, designer Kim Jones organized a spectacular show at the Pyramids of Giza in Egypt, helping the brand generate over 10.7 million organic likes, comments, and shares that month.

Chanel, on the other hand, chose Dakar, Senegal to host its first-ever show in Africa for Pre-Fall 2023, which helped Chanel generate over 2.4 million organic likes, comments, and shares in December 2022.

Designer Hedi Slimane transported us back to California with Celine's Winter 2023 fashion show in Los Angeles, which received 741,000 organic likes, comments, and shares in December 2022.

Meanwhile, Simon Jacquemus returned to Paris after holding shows in Hawaii and the South of France to conclude the year 2022. For his final show of the year, Jacquemus titled his spring 2023 show "Le Raphia," which garnered over 3 million organic likes, comments, and shares in December 2022.

Jacquemus' final show was immediately followed by their latest social media campaign, featuring Pamela Anderson in the streets of Paris. The campaign generated over 22.3 million views via Instagram Reels, ending the year 2022 on a high note in an unexpected and iconic way. 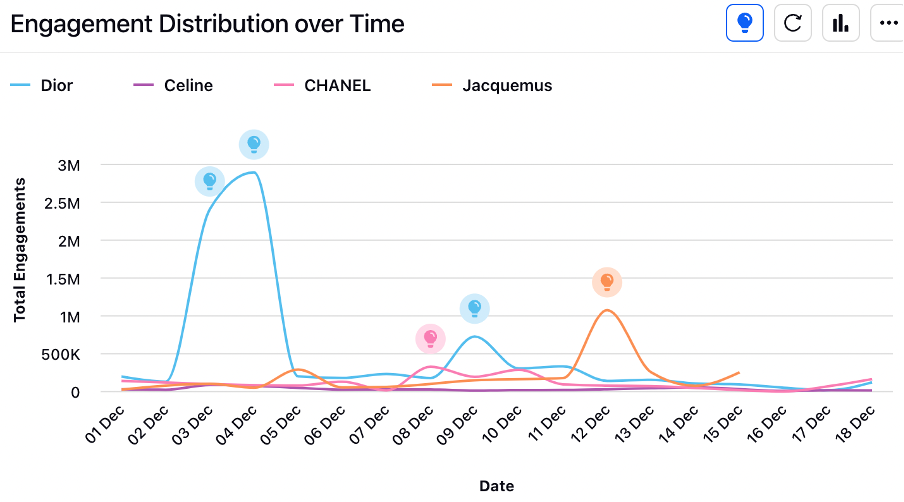 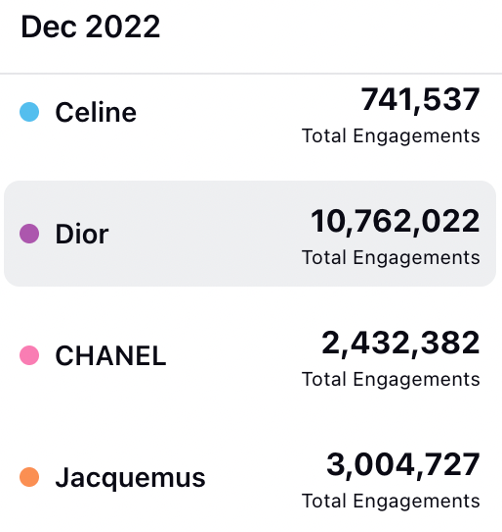 How Sprinklr helps you discover your brand’s most “engaging moments”

The world’s largest organizations use Sprinklr to drive revenue, reduce costs, and mitigate risks across modern channels while bringing their teams together to unify customer experiences. Brands rely on Sprinklr and leverage our value framework to maximize their investment in Unified-CXM technology and ROI. 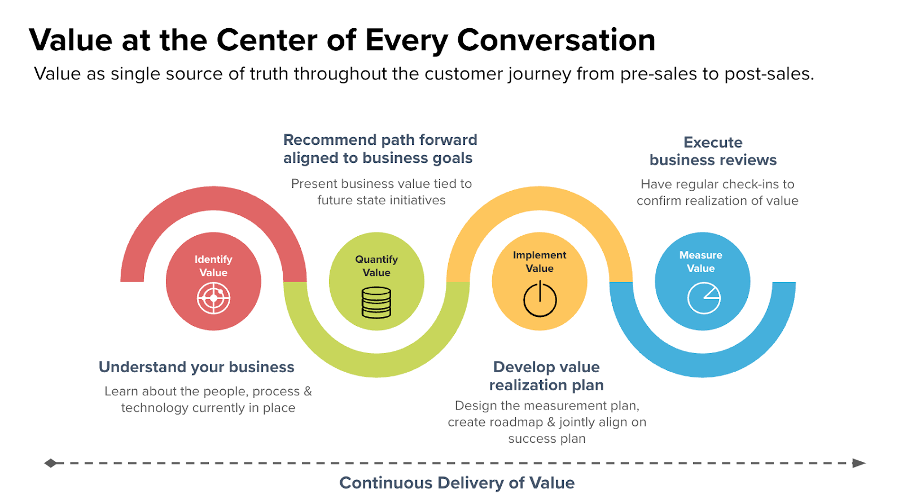 Top PR KPIs and metrics to measure in 2023

Uncover the top PR KPIs and metrics that you need to track in 2023. Measure your programs objectively and generate the desired ROI from public relations.

A complete guide to Facebook monitoring to help you monitor your brand mentions, industry mentions, and conversations around your brand and competitors.

How to leverage Social Listening to grow your BFSI business

Social Listening can get you tons of actionable customer insights from an ocean of digital conversations while complying with all data and privacy regulations. Read more.