We live in an era where social media has become the de facto destination for all things shopping. Since the onset of the pandemic, businesses have been flocking to social networks to reach consumers at a rate never seen before.

Conversely, buyers also log into their favorite social platforms to research a product before buying it.

There’s no denying that today’s consumers have more power than ever. Their opinions and preferences online are changing how brands do business in tangible ways. The dated one-way communication between brands and consumers is slowly but surely making way for two-way collaboration between the two parties.

Consumers have become wary of brands’ bombastic campaigns and hence look forward to authentic, original content, not from brands but fellow consumers.

Eighty-five percent of consumers find user-generated content (UGC) more influential than brand-created content. Every brand under the sun, thus, likes to bank on UGC campaigns to better connect with their audiences and boost conversions. 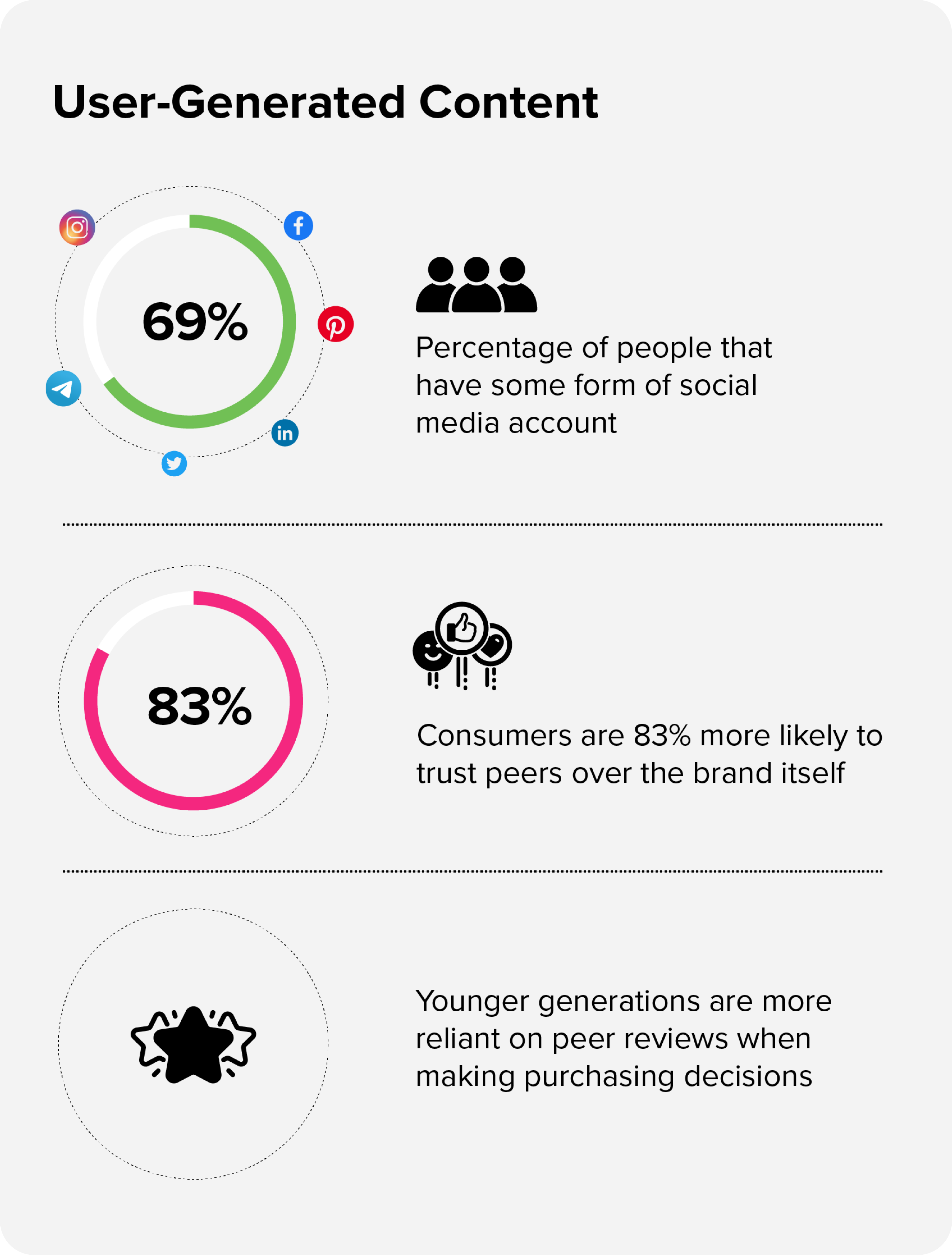 This begs the question of what UGC is and what makes it so compelling from brand and consumer perspectives. And should you be tapping into this trend to run successful social campaigns?

User-generated content, or UGC, is any online content highlighting a brand or its products created by a consumer (or an employee) rather than brands. Think of it as word-of-mouth marketing in the social media realm.

By the way, UGC and influencer posts are not the same. Unlike the latter, UGC is generally spontaneous and rarely commissioned by a brand. 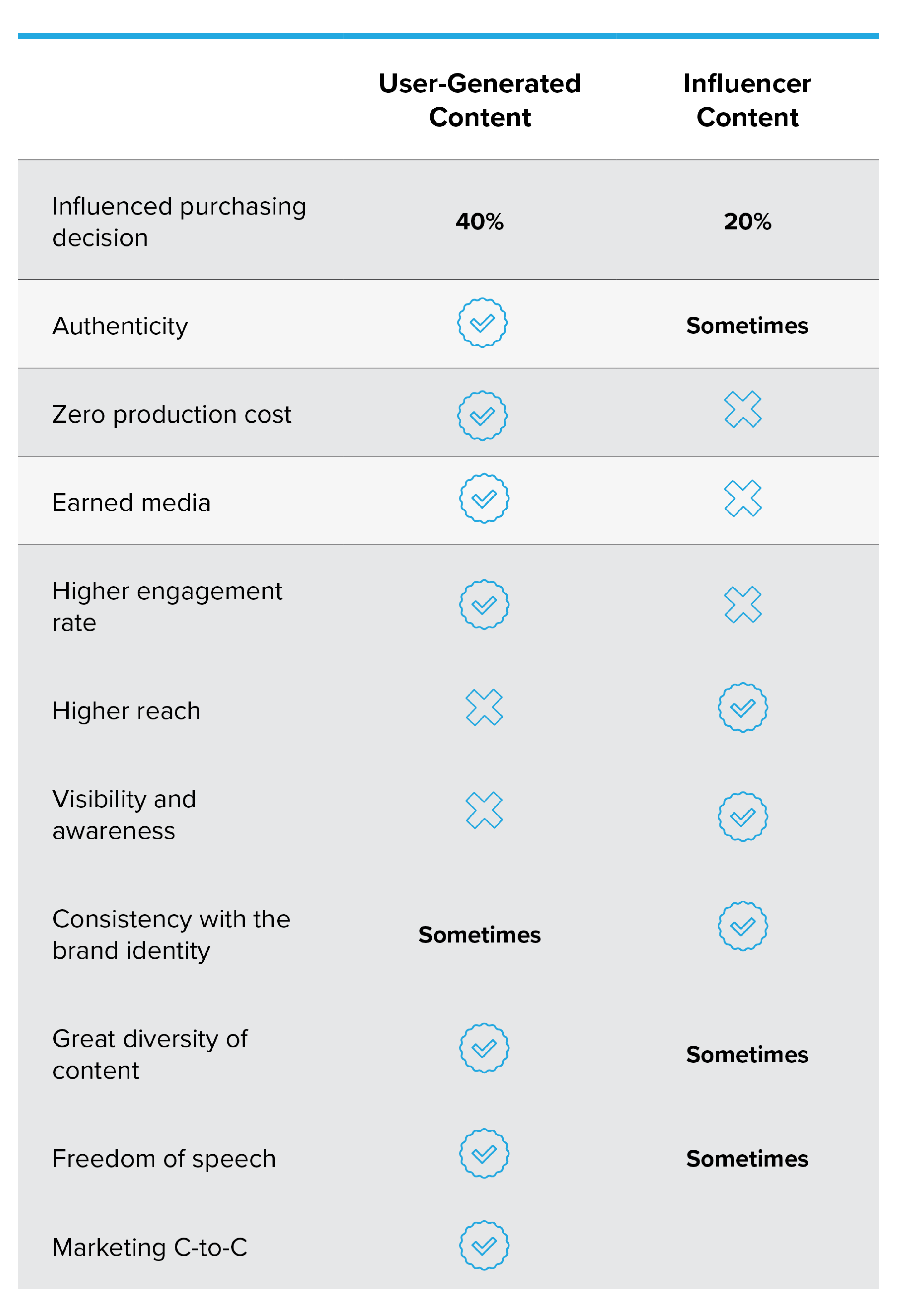 In other words, UGC is the vehicle customers, loyalists, and employees use to share their opinions on a product or brand with the world. It comes in various shapes and forms, including:

But more on this later. First, let’s see how UGC can benefit your brand.

Social media has come a long way since the Myspace days. In the last decade, it has completely taken over our lives — for good or bad — with intuitive photo and video sharing social networking services such as Instagram and TikTok. With 1,192 photos being shared on Instagram every second, UGC has become ubiquitous to the point that you can harness its power to:

1. Build and grow your brand community

Social proof, a term coined in 1984, is essentially the idea that people copy others’ actions in an attempt to fit in.

UGC is social proof in the digital domain. It works by tapping into the inherent human instinct to follow others’ actions, in the process, building trust and credibility and lowering barriers to making purchases online.

The statistics below indicate that UGC influences shoppers’ decisions and can prove advantageous to brands if leveraged.

For example, when Apple launched iPhone 6, it encouraged consumers to unleash their inner photographers and upload their best snapshots using the hashtag #ShotOniPhone6. The world’s first $3 trillion company then cherry-picked the best submissions and featured them on billboards worldwide. 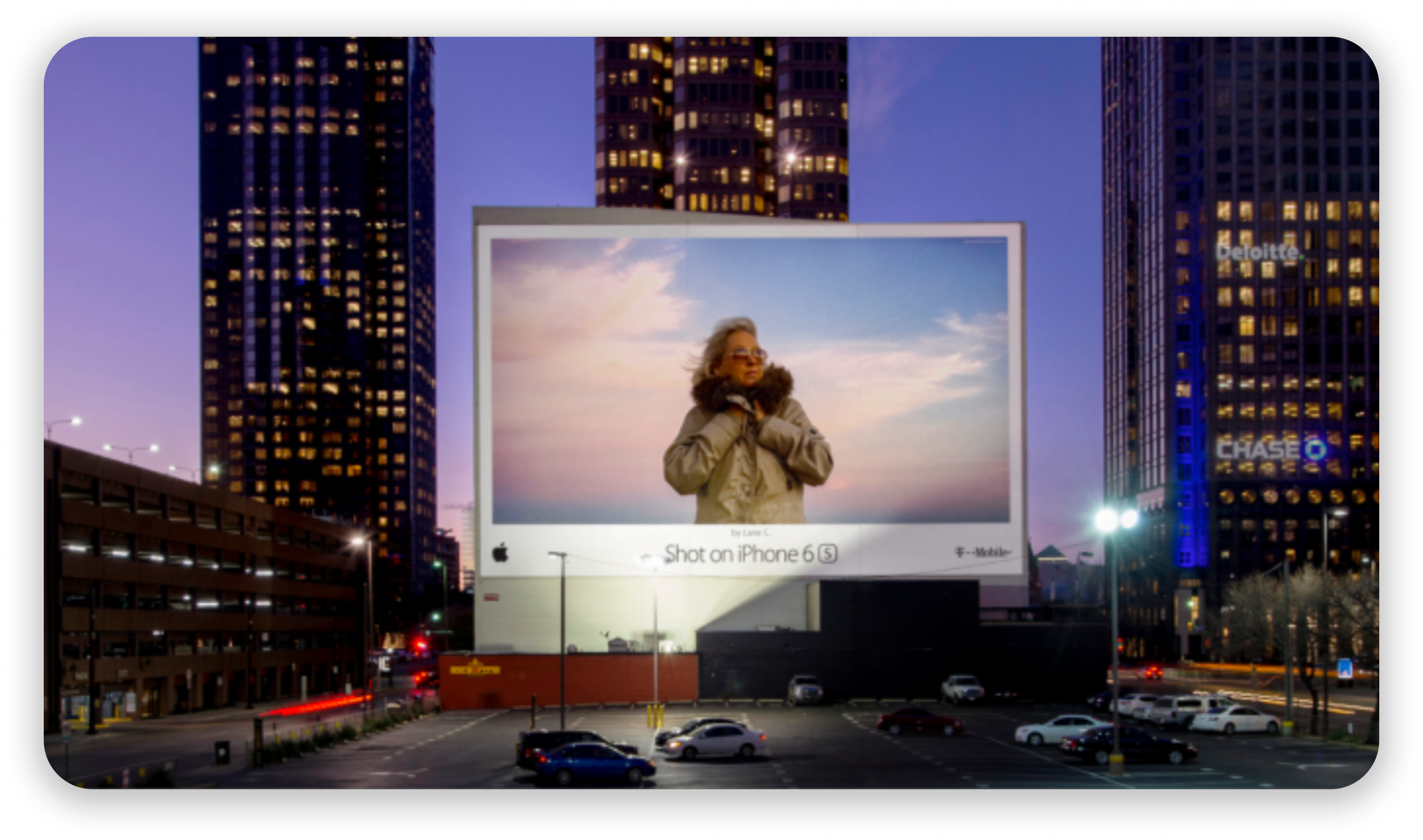 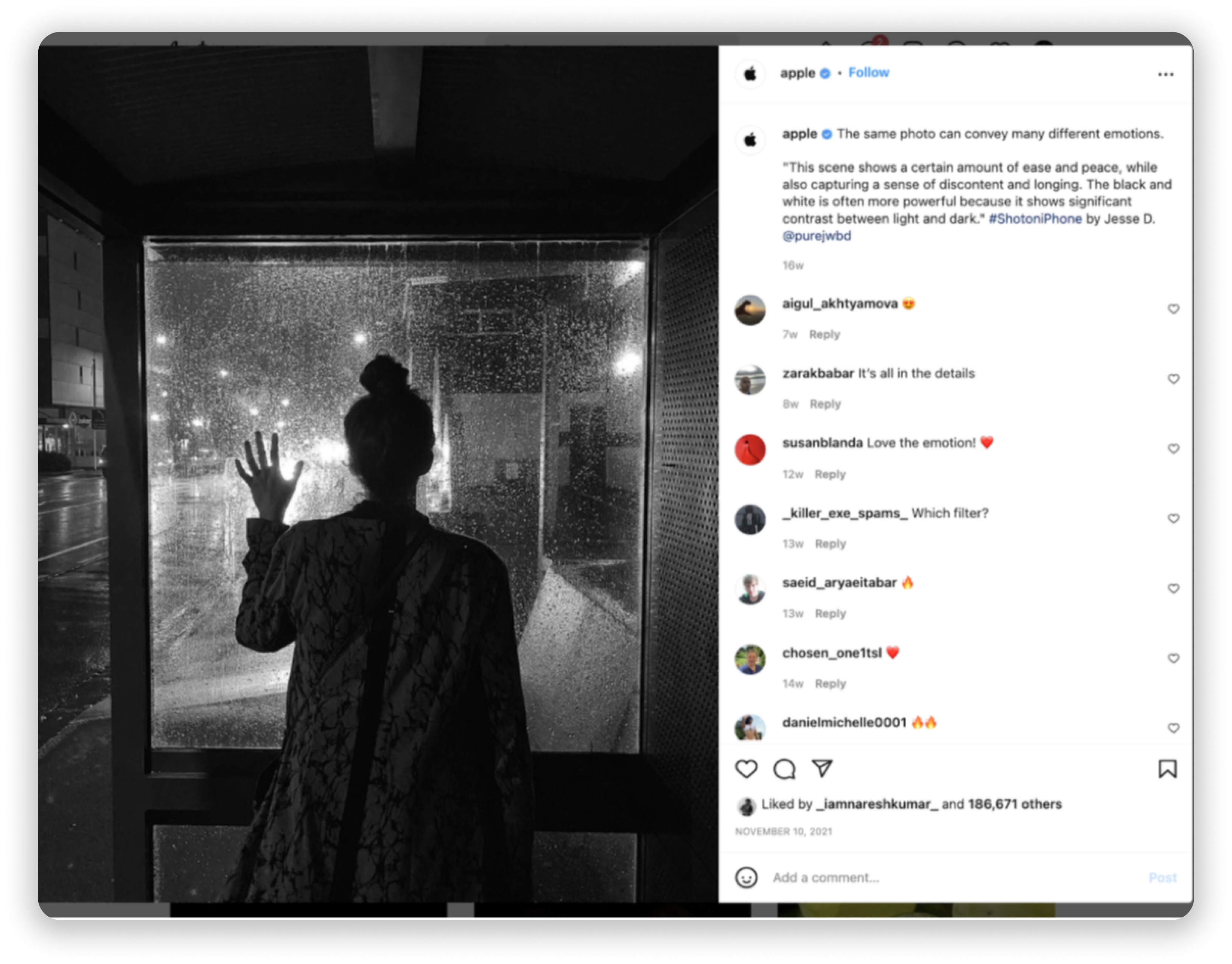 Though the photographs used in the campaign look just as good as the images shot by the pros, the public knows they’re legit – that regular people shot these images. Therefore, these ads seemed more sincere to the public than ads or content generated directly by the brand.

By the end of 2020, the campaign had received an estimated 6.5 billion media impressions and yielded 95% positive mentions.

Lastly, Gen Z accounts for one-third of the U.S. population. Earning the trust of this critical demographic should be a top priority for your brand. Since they crave authenticity and individuality and look for an emotional connection with their favorite brands, quality UGC can show these new-age consumers that your brand cares and foster a loyal community.

In 2011, Coca-Cola Australia pulled out all the stops and launched the nationwide “Share a Coke” campaign to make the 136-year-old brand appeal to a younger demographic down under.

Here are a few mind-boggling numbers associated with the creation of the campaign: 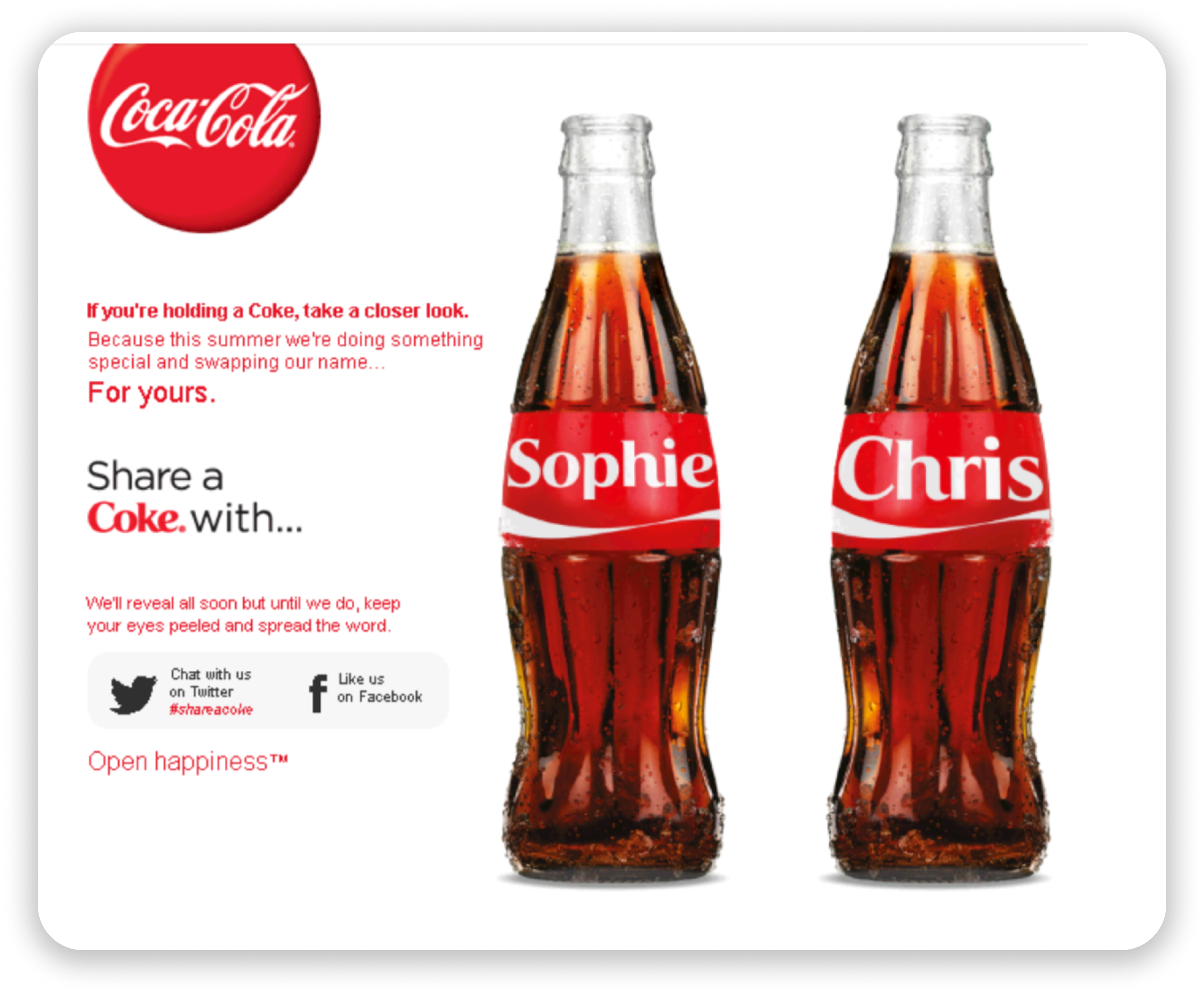 The FMCG giant might have broken the bank with this ambitious but successful campaign. But guess what – it spent minimal marketing dollars on promotion and yet managed to get the word out about this one-of-a-kind campaign purely by riding the UGC wave. 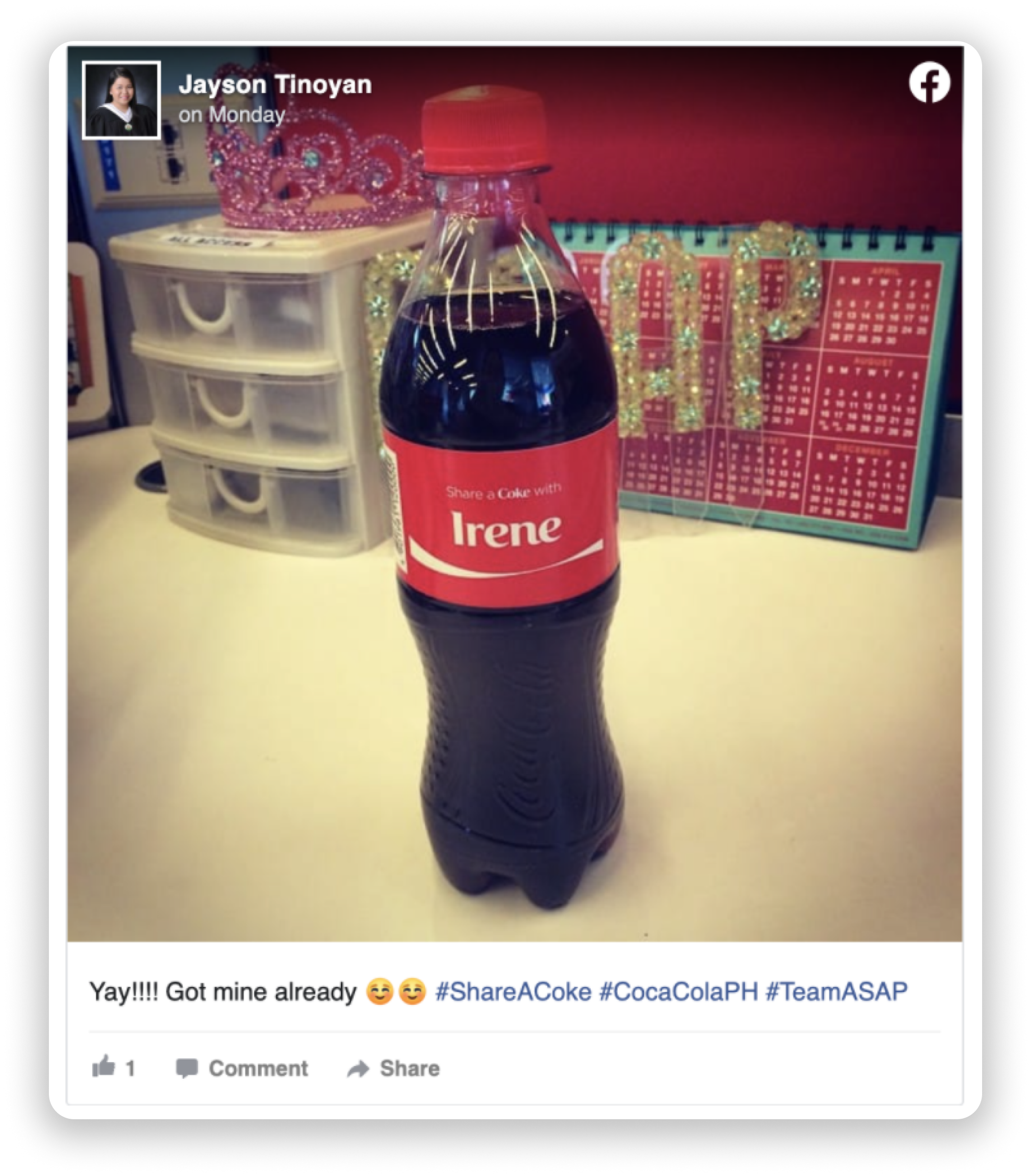 It’s a great case study on generating user content via an offline campaign. The campaign involved printing 150 of the most popular names in Australia on Coke bottles and cans and encouraged customers to share pictures of their purchases with the hashtag #ShareACoke.

It was an instant hit among consumers, generating more than 500,000 photos and (hold your breath) 25 million Facebook followers. The campaign then reached 80 countries and enjoyed the same success. 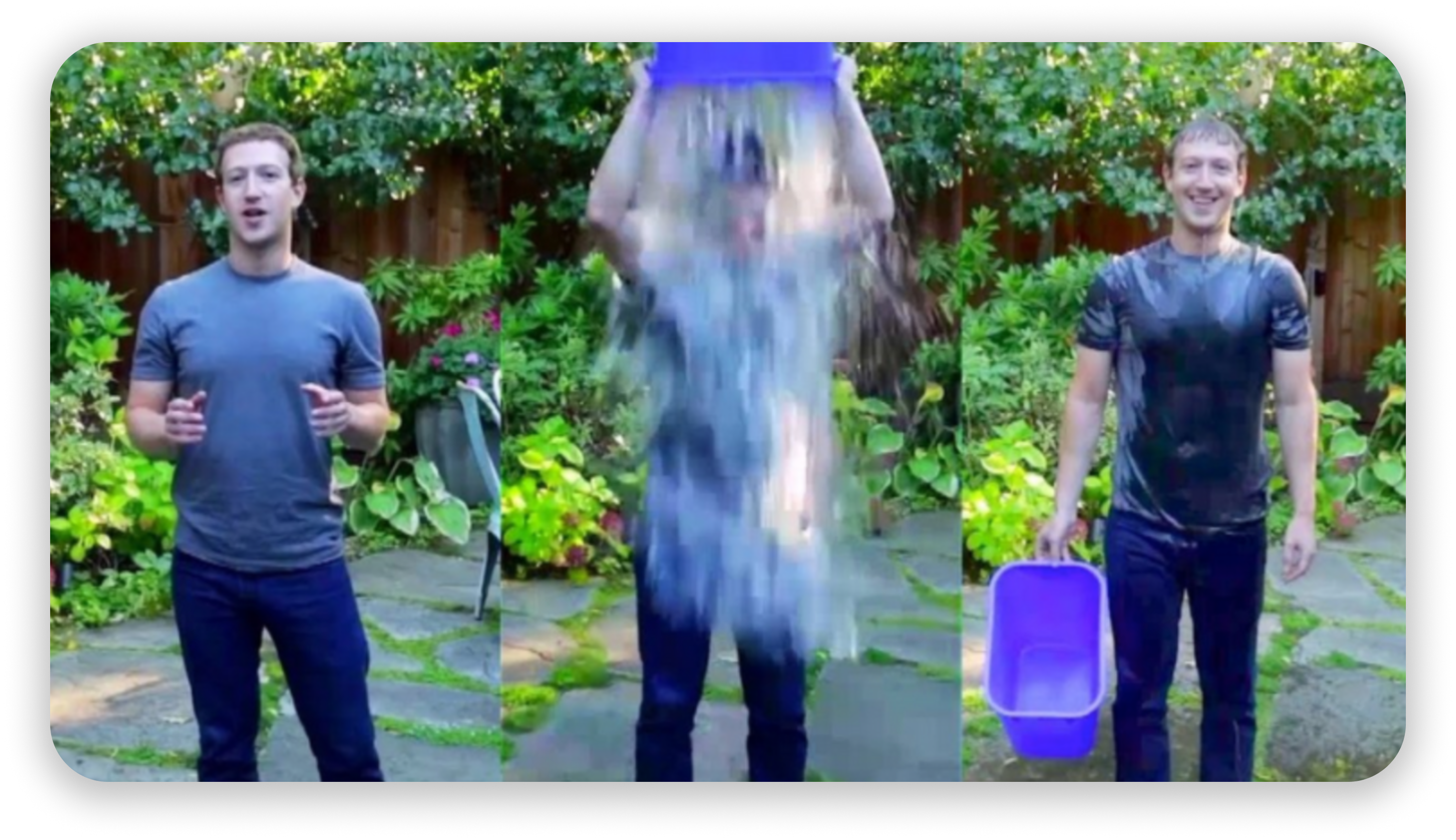 Started by the late Pete Frates, the rules of the challenge were simple. Participants had to film dousing themselves with a bucket of ice water. And donate $10 to The ALS Association, a nonprofit that funds research on Lou Gehrig’s disease, or skip the first part and donate $100 instead.

Once done, they had to upload their video to social media as proof and challenge three of their friends to take part in it.

The challenge quickly went global and viral with 2.4 million videos on Facebook with #IceBucketChallenge and raised $115 million for the ALS Association. The Ice Bucket Challenge was probably the only instance when an organization benefited from a UGC campaign that it didn’t directly initiate.

Though this enormous success can be attributed to crowdfunding efforts, it also highlights the power of user content and the wonders it can do for your organization in terms of engagement, brand awareness, and brand recall.

But it would be best if you exercise caution when hunting for UGC to prop up your brand (or products), as 85% of consumers believe that brands are responsible for moderating UGC for appropriateness and accuracy on their owned channels.

Therefore, be prudent in using UGC and never publish any post without vetting thoroughly. In addition, always make it a point to reach out to users before sharing their content on your channel, and never forget to credit them.

Here are five ways you can go about collecting UGC for your brand:

1. Roll out a hashtag challenge

The sign # has come a long way from its humble beginnings as a pound as a unit of weight or mass. It was rechristened in 2007 and has been used widely on Twitter and other social platforms.

Creating a branded hashtag is a great way to kick-start your UGC campaign. Adobe partnered with pop icon Billie Eilish and launched the Make the Merch Contest in early 2022. It created the hashtag #BillieXAdobe and gave budding designers and artists worldwide a platform to showcase their talents. 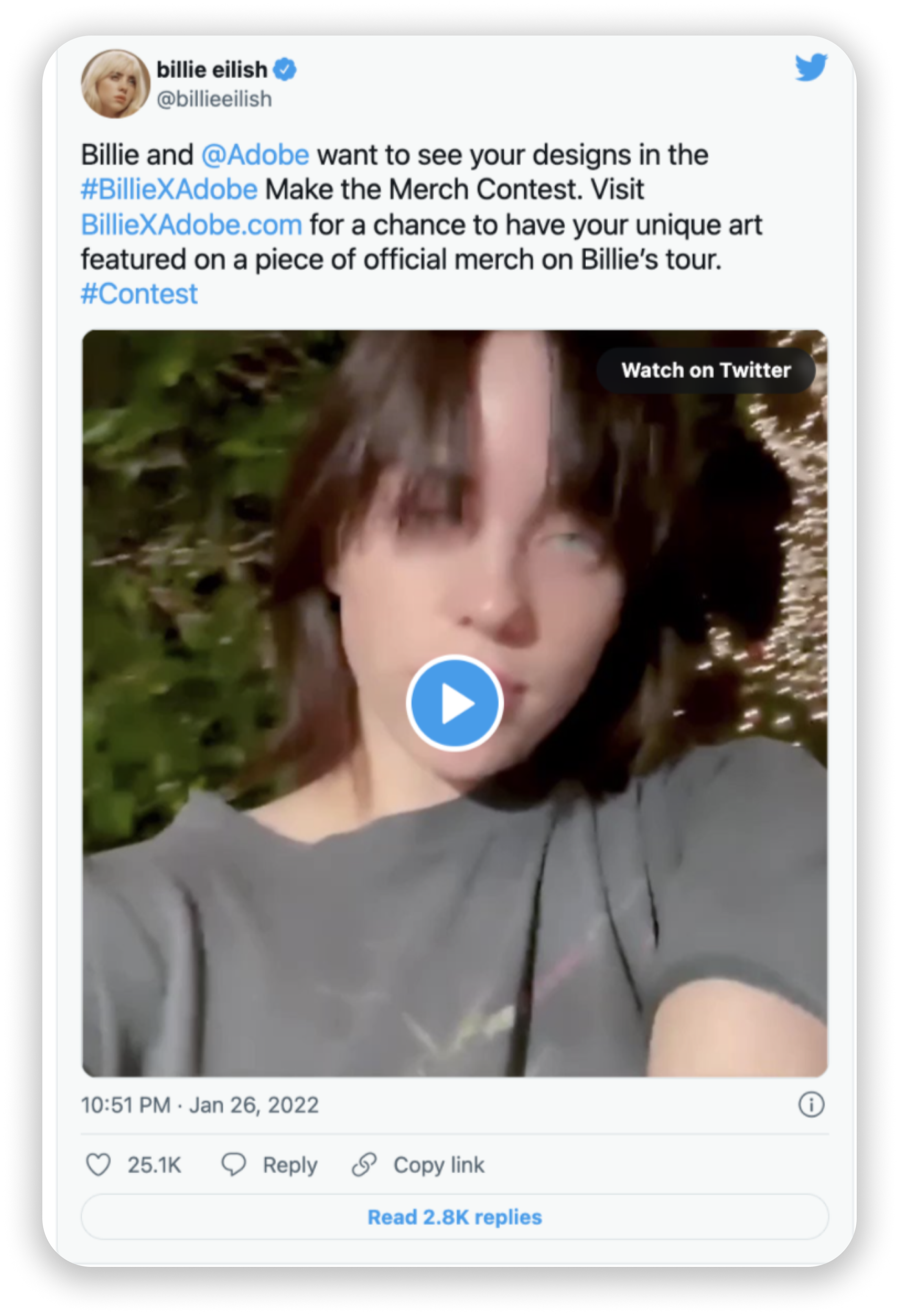 The software behemoth put Eilish’s popularity to good use – the campaign has generated almost 100,000 posts to date on Instagram alone. This means the company has access to a lifetime supply of artwork they can leverage for future ad campaigns, product/feature promotions, and product packaging.

Adobe has run hashtag challenges, namely the #AdobePerspective, in the past and to great success. 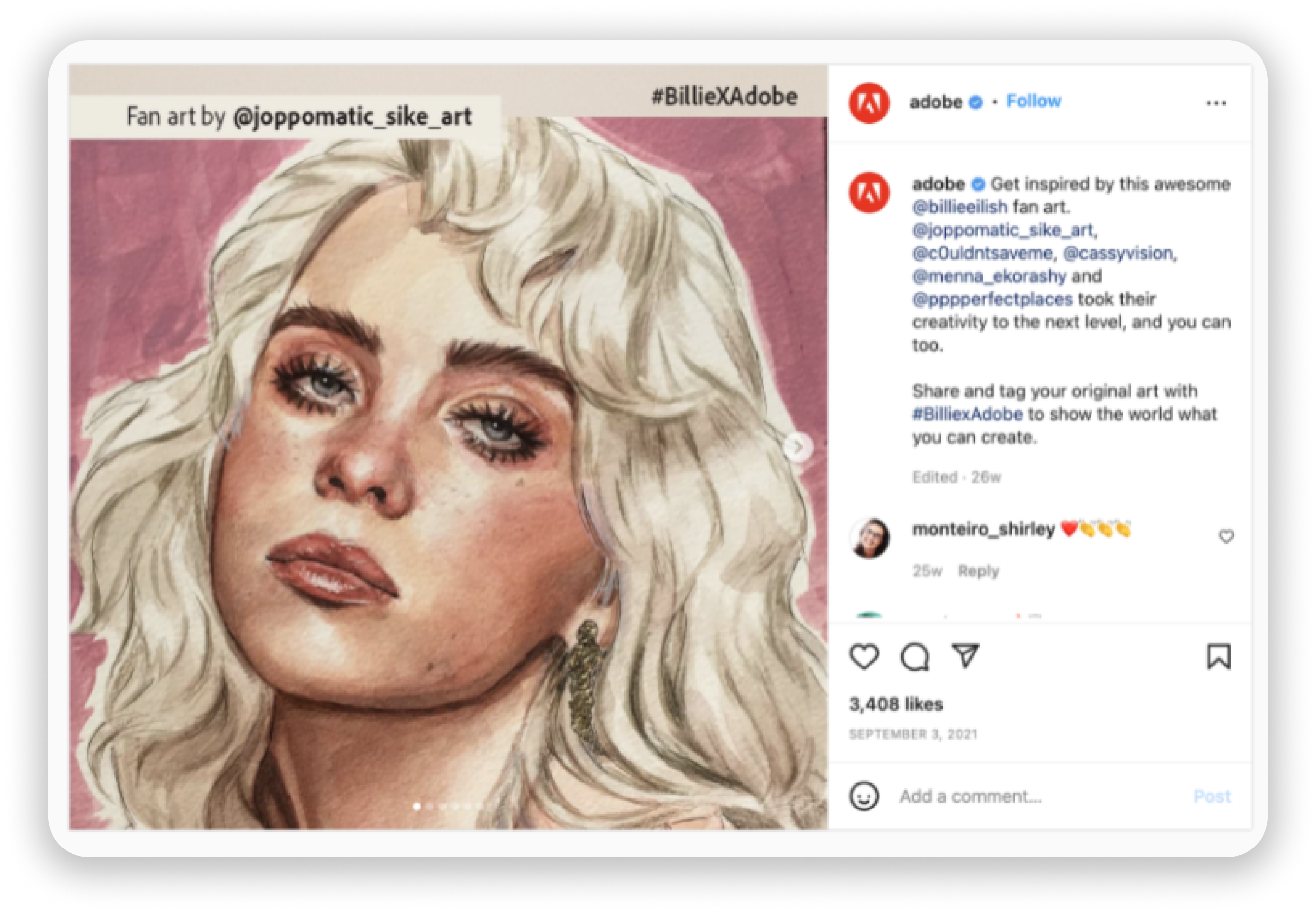 A few brands, such as GoPro and Red Bull, have capitalized on hashtags like no other. Their official social accounts are essentially a treasure trove of UGC, with very little in-house content.

Both these brands have garnered upwards of 50 million user-generated posts collectively on Instagram. And they’ve achieved this feat by building focused interest using a single hashtag, #GoPro and #RedBull, respectively.

Since it’s easily one of the most effortless ways to generate new content promoting a brand or its products, there’s no stopping the hashtag trend.

Organizing a game where users are encouraged to submit their best photographs can effectively generate UGC.

You’re probably wondering how you can organize a photo contest that appeals to my brand community, the majority of whom may not be into photography.

Do you and your dog look alarmingly alike? Maybe you sport the same hairstyle or the same toothy grin? If so, we want evidence! Send a photo to themail@newyorker.com by Thursday, March 10th, with the subject line “Twinning,” and one of our cartoonists may draw you and your bestie for an upcoming series. 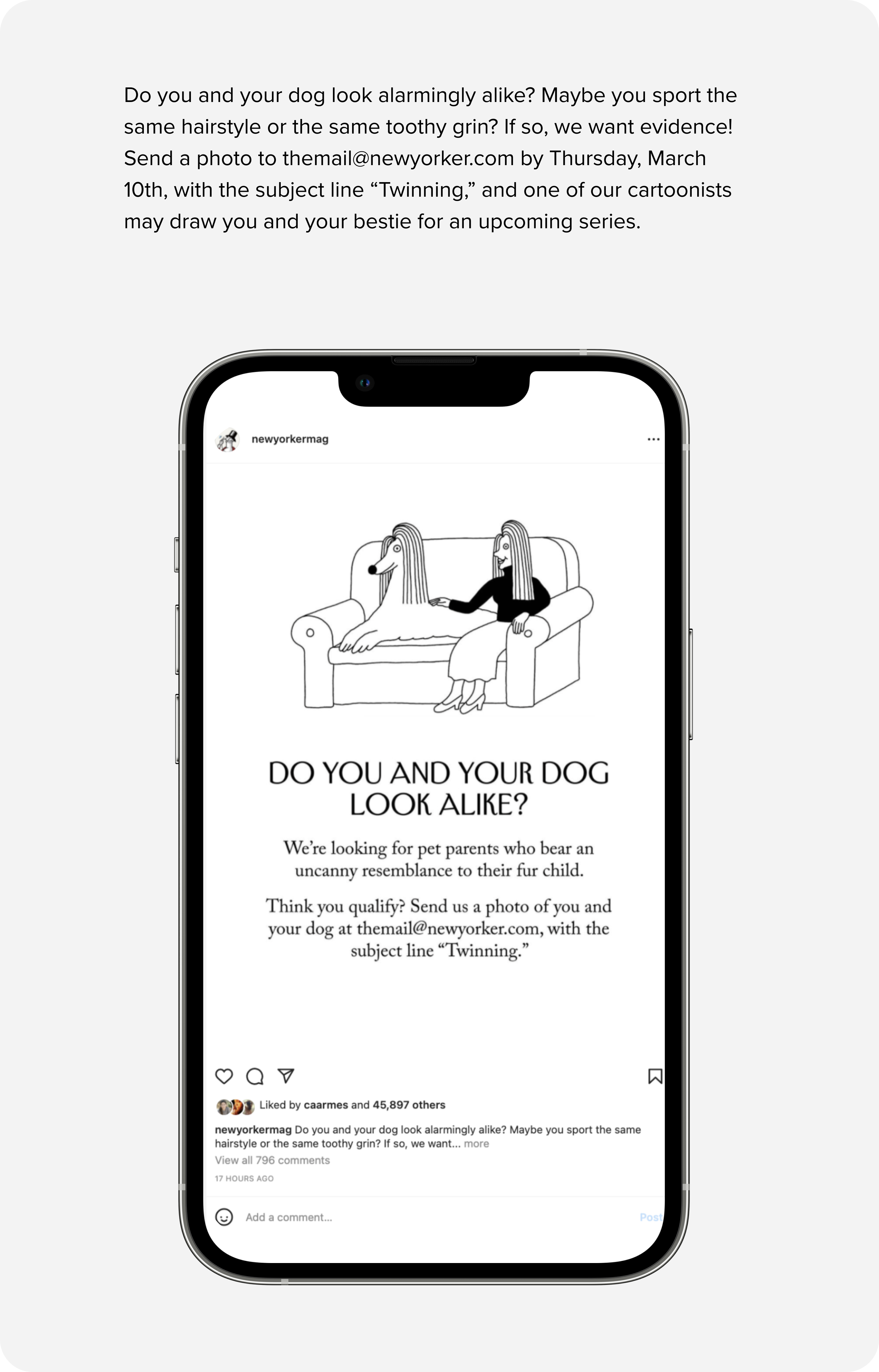 As you see, regardless of what industry you are in, inviting users to share photographs is a surefire way to engage your audience and rack up user content.

You’ve probably heard the adage, “Great brands don’t sell products. They sell emotions”. You can encourage UGC by allowing the members of your community to lend their voices to topical issues.

VSCO, for instance, launched a UGC campaign at the height of the Black Lives Matter movement in 2020. 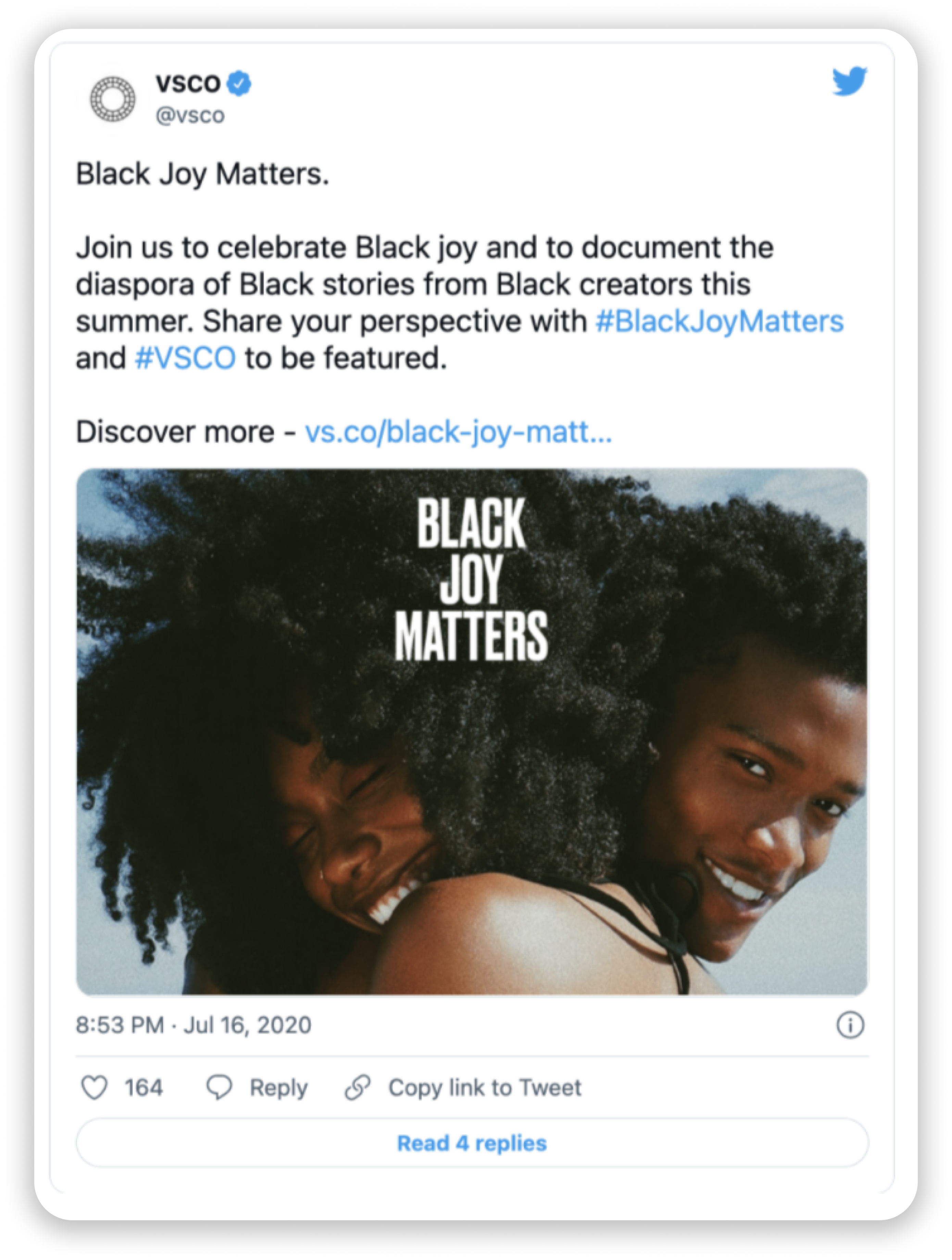 The Black Joy Matters campaign put a positive spin on the issue by highlighting the success stories of black individuals and communities. Black creators were encouraged to submit work reflecting their achievements using the eponymous hashtag.

The photo editing and sharing app then amplified the voices of these artists across its social channels, on its app, and through various media and brand partners.

Did you know that 80% of Americans are likely to switch brands, if equal in price and quality, to one that supports a cause?

By taking a stand on social issues and giving users the space to contribute to the narrative, you’ll earn their trust, loyalty, repeat and referral business, and garner pertinent UGC that you can share with the world.

Wouldn’t it be remiss of you not to pamper your most loyal followers? No, I’m not talking about handing out freebies or gift vouchers. I bet your company is already doing that.

I was referring to guest blogging – HubSpot is a pioneer. They have four blogs – Marketing, Sales, Service, and Website – that people can contribute to.

You, too, should start leveraging your blogs to find and encourage guest contributors. Like user posts on social media, guest blogs have an air of authenticity that can help spawn other guest contributions.

5. Put customer data to good use

As a Spotify user, you may have noticed the Wrapped playlist appearing as if by magic at the end of every year. Most users post their Spotify Wrapped playlist on social media to let their friends know what kind of music they listen to the most.

But do you know what Spotify does with all that juicy customer data? Take a look. 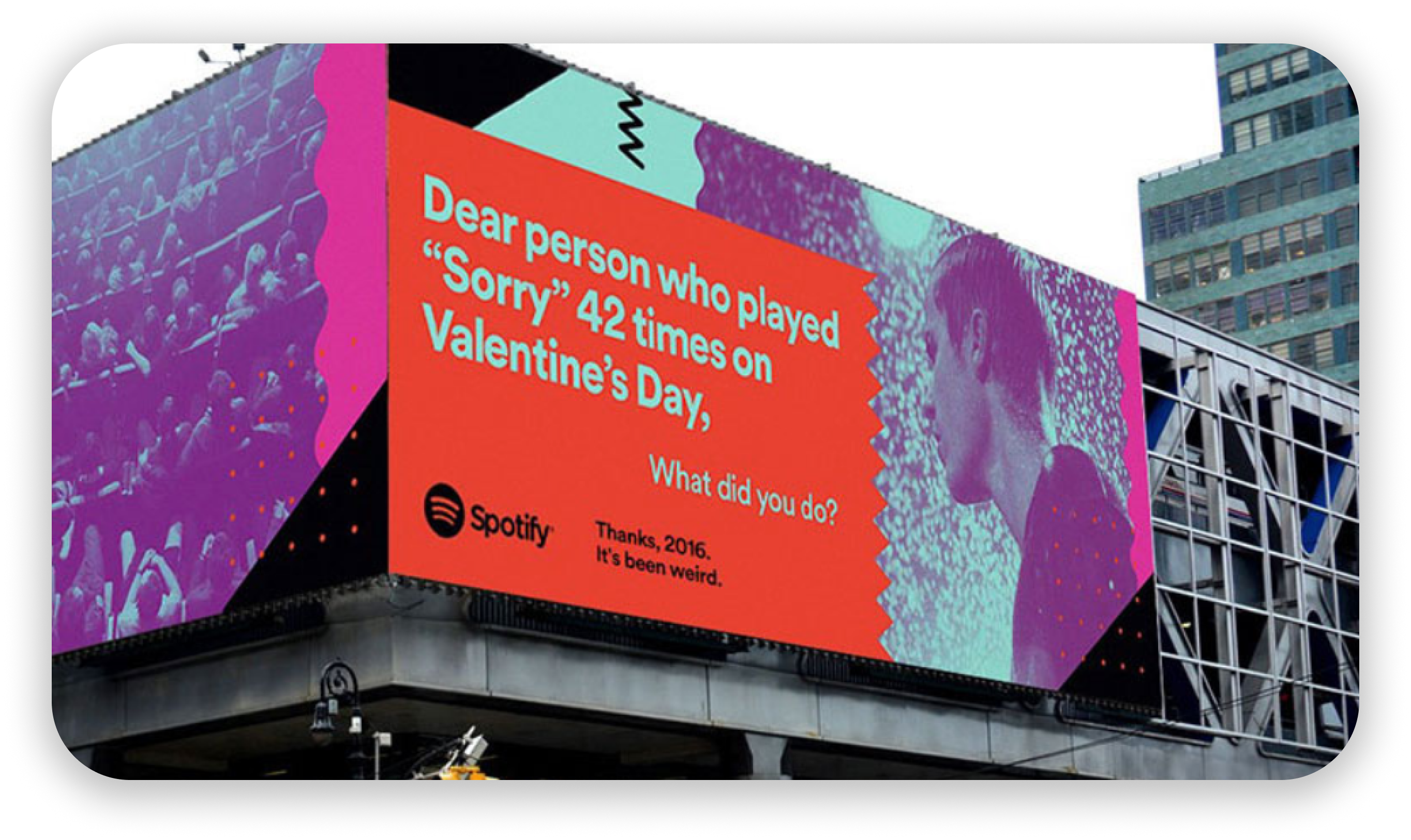 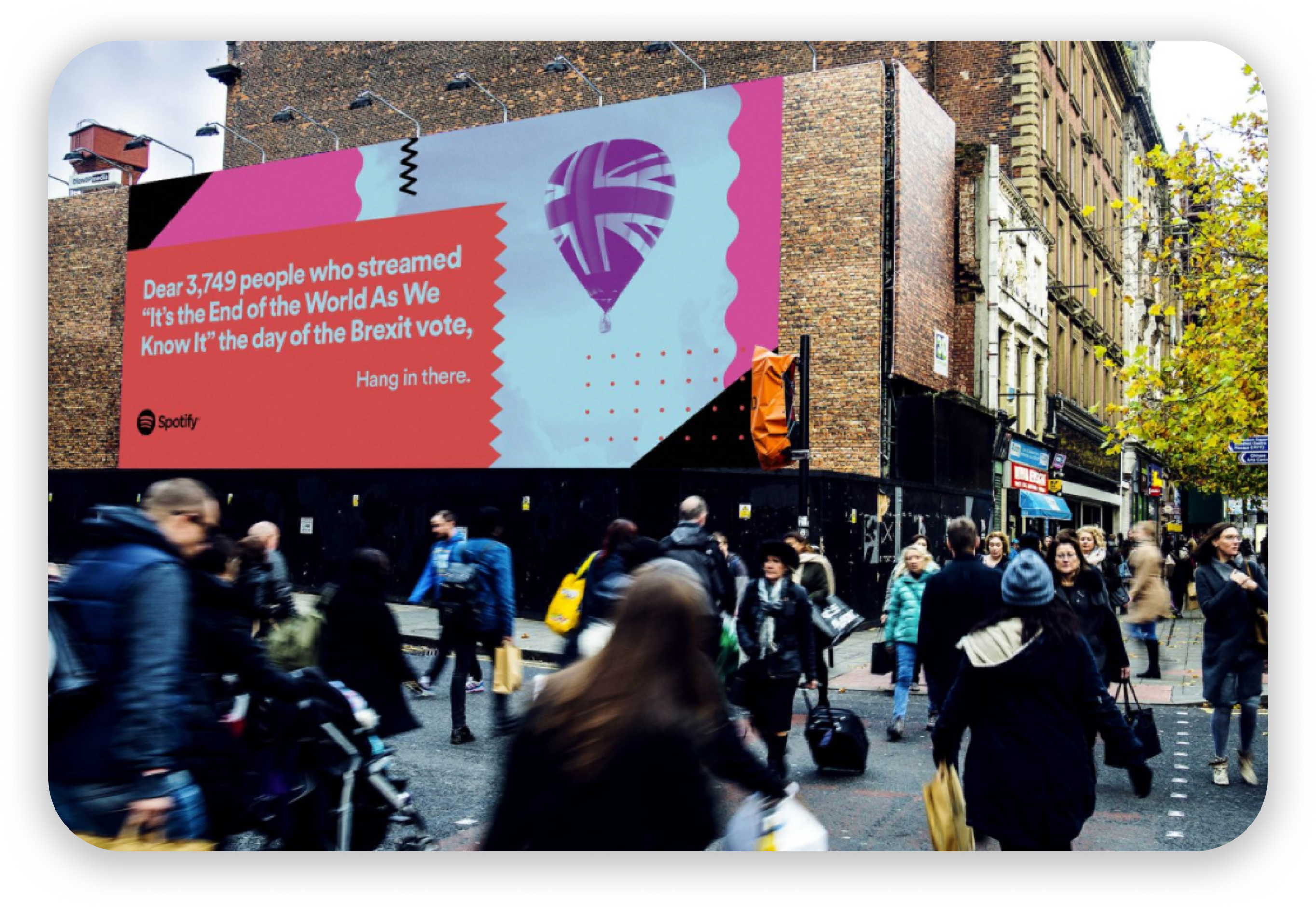 In November 2016, Spotify launched a global campaign of outdoor ads. Each billboard featured tongue-in-cheek messages localized for the markets they appeared in, namely the U.S, UK, France, and Germany.

There couldn’t be a better example of an ad campaign that leveraged user behavior data in a fun, non-invasive manner.

If you’re wondering, this is still user content in the broadest sense of the word and can work to your advantage if done tastefully.

No matter what techniques you employ to drive your UGC engine, always prioritize customer engagement.

For instance, thank your users for providing feedback, complimenting them on their content submissions, or starting a discussion thread to keep the conversation going. You can even try to nudge fans to engage with one another. Doing any of those things can result in genuine product reviews, customer testimonials, and case studies, which can further raise your UGC game.

BFSI: 3 steps to build a killer social media brand and grow your sales from GenZ

Sprinklr automates your workflows to help your organization create positive customer experiences across all digital touchpoints.

Learn how to localize your marketing efforts using Sprinklr's Distributed marketing platform as you expand your channels and markets.

Sprinklr’s AI analyzed the Facebook, Instagram, and Twitter accounts of 50+ BFSI players across 100+ social accounts to reveal the current social media trends to help you map out your customer engagement strategy.