Modern Channels and Must-Watch Events in the Time of Quarantine

Every few weeks, Verzuz hosts a beat battle between two iconic artists playing songs from their catalogs. Verzuz live streams the contest for people to enjoy and discuss on social media.

Having recently moved to London, I found myself setting an alarm for 1:00 a.m. to watch one of their Instagram Live events: the recent battle between American rappers Jadakiss and Fabolous.

The following day I had a few questions about the social interaction that’s a key part of the Verzuz experience. Luckily I have access to the Sprinklr Unified-CXM platform and was able to find some answers. Here’s what I learned. 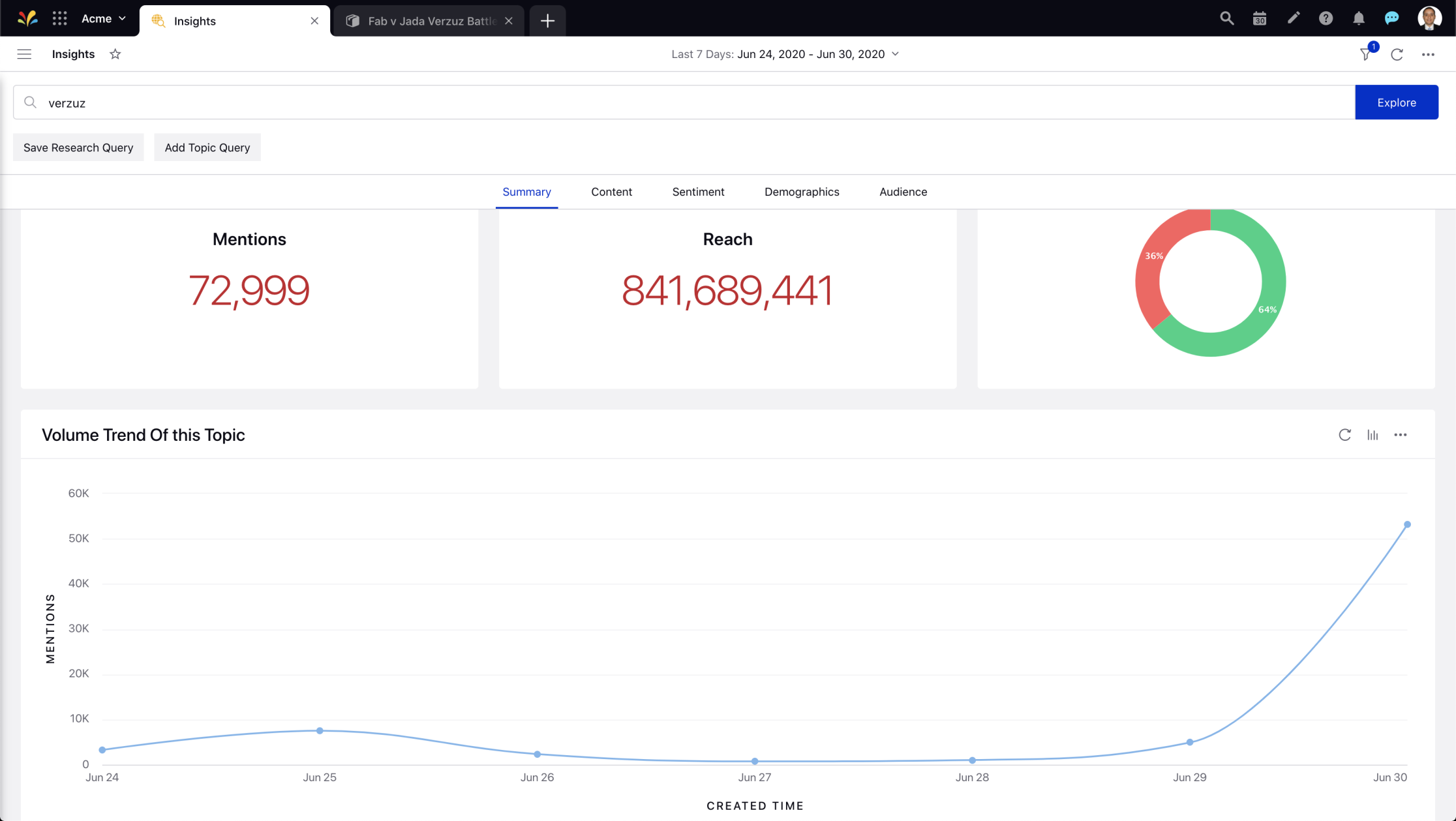 The image above shows the mentions of Verzuz on Twitter for the seven days leading up to the event. You’ll notice a lot of conversation increasing before the event, and then spiking as everything kicked off, with a total of almost 73,000 mentions.

Just prior to the start, my prevailing thought was “What am I doing? Is there anyone else doing this right now?” It turns out I was not alone. When monitoring the most popular social networks during the event, London had a respectable showing in the top three of cities where fans were talking about the event and the artists.

Full disclosure: I’m old. I just turned 39 and these are artists I’ve loved for years. I wondered why they’re doing this now? They’ve both had relatively recent projects, so why take this trip down memory lane? What kind of exposure does this drive? Using Twitter as a proxy due to it’s conversational and real-time nature, I wanted to see how much of the conversation around these two were related to this Verzuz battle. 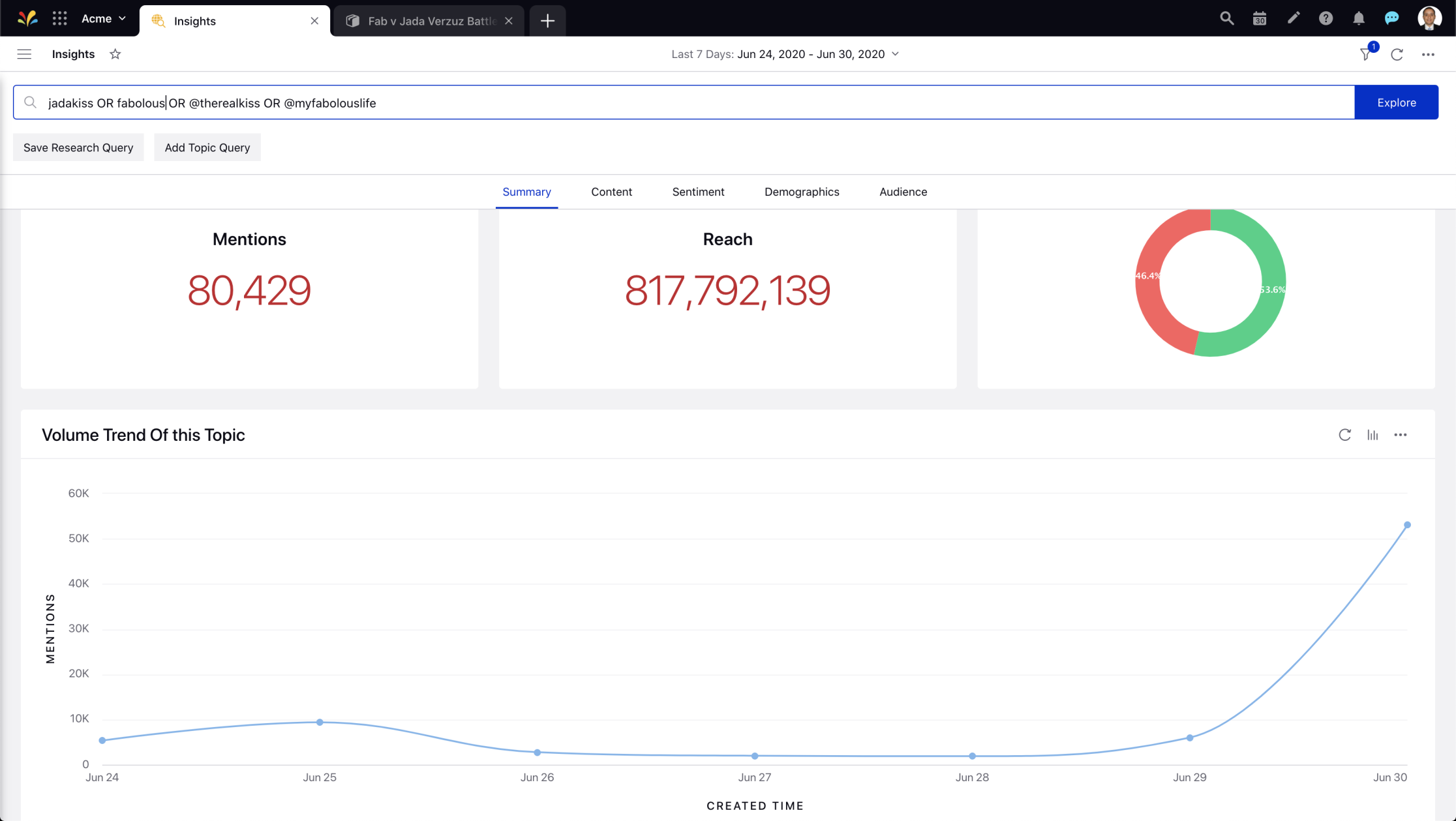 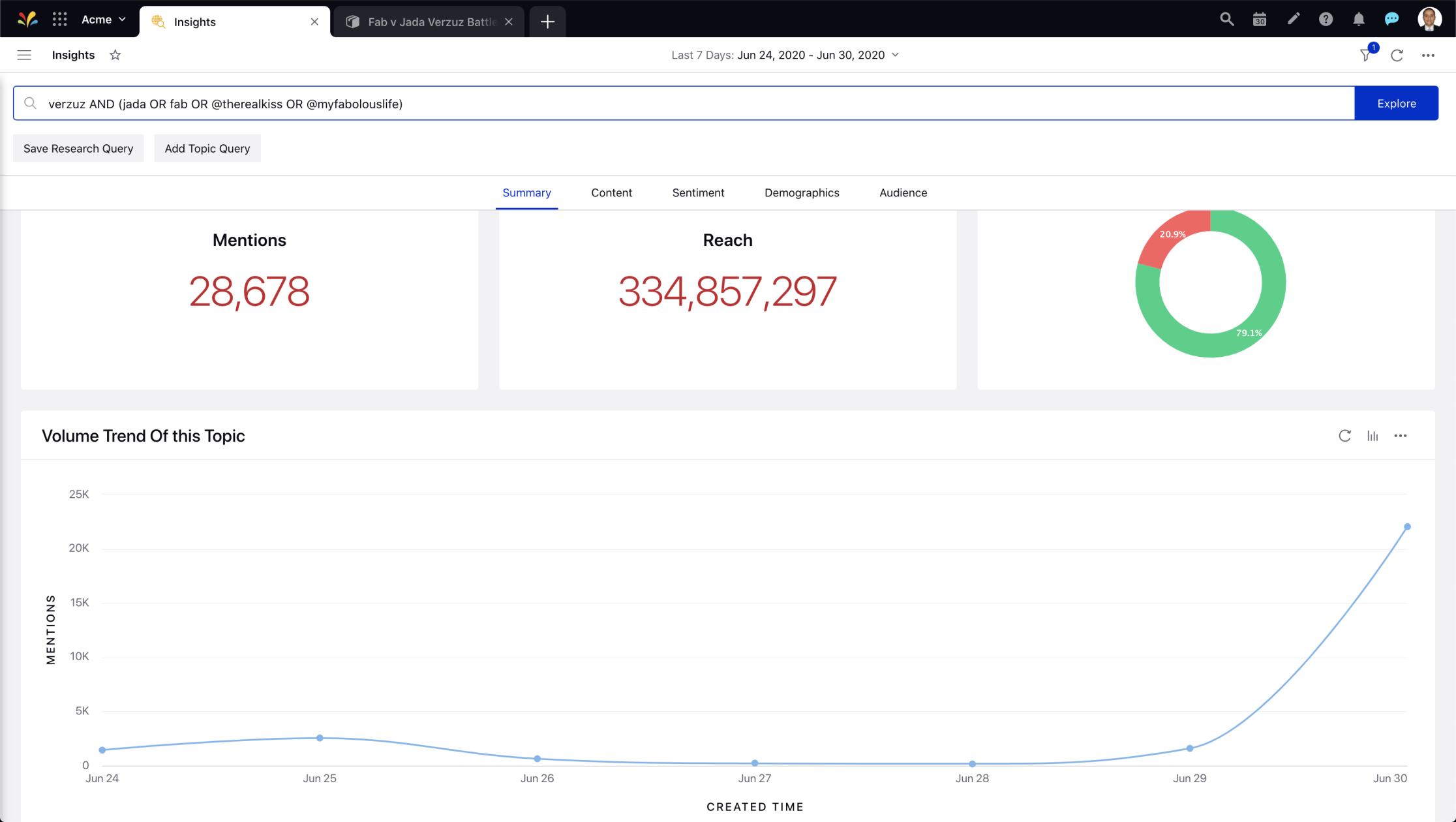 Comparing the two charts above, you can see that of the 80,429 mentions of the artists, 28,678 also mentioned Verzuz. That’s 36% of the mentions, and the conversations were overwhelmingly positive.

I don’t know all the particulars of the music industry, but I have to assume engaging with fans and promoting their music libraries is in the artists’ best interest. And wouldn’t you know it, during the entire battle I found myself on a second device adding to my Spotify playlists.

I also used the second device to participate in the Twitter conversation where a lot of folks were asking for playlists of the event. Fabolous and Jadakiss captured my attention, got me listening to their catalogs, and prompted me to explore songs that either weren’t played or were from recent projects.

So score one point for the artists. But how does everyone else involved make a profit? 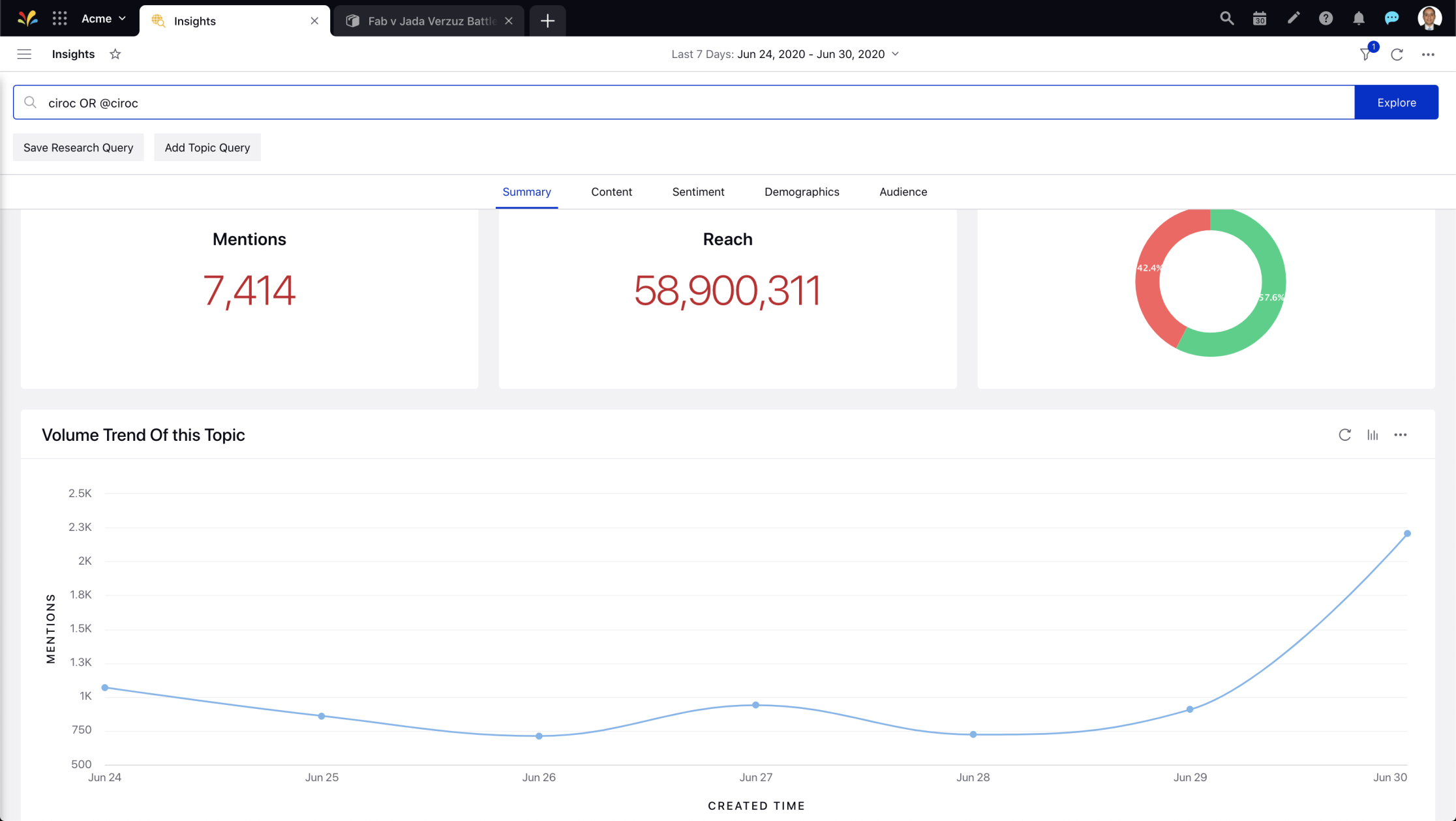 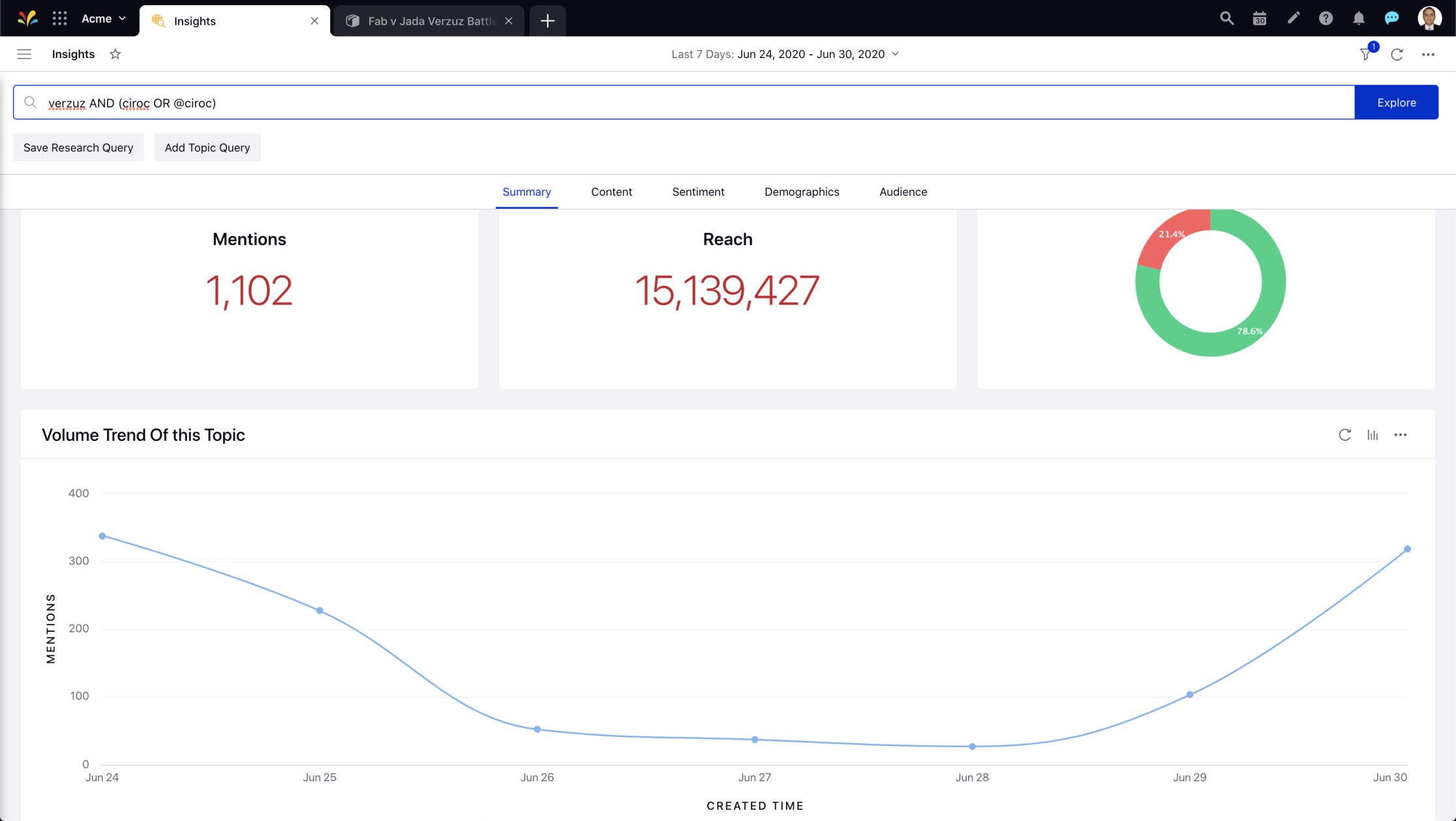 The event was sponsored by Ciroc Vodka who was included in promotional materials and mentioned multiple times by the artists. An alcohol brand’s sponsorship made a lot of sense, especially considering many hip hop artists endorse alcohol brands as well. So, was there an impact on the earned conversation around this brand in the build-up to and throughout the event?

Comparing the two charts above you can see that 15% of the 7,414 Ciroc mentions were related to the Verzuz event and, again, it was overwhelmingly positive. This can be a smart strategy. The best brands in the world invest in sponsorships and then maximize that investment by amplifying the message and cultural moment with targeted advertising and engagement.

What next? Well, the unexpected happened during the battle and provided an interesting opportunity for a brand that wasn’t listed as a sponsor. 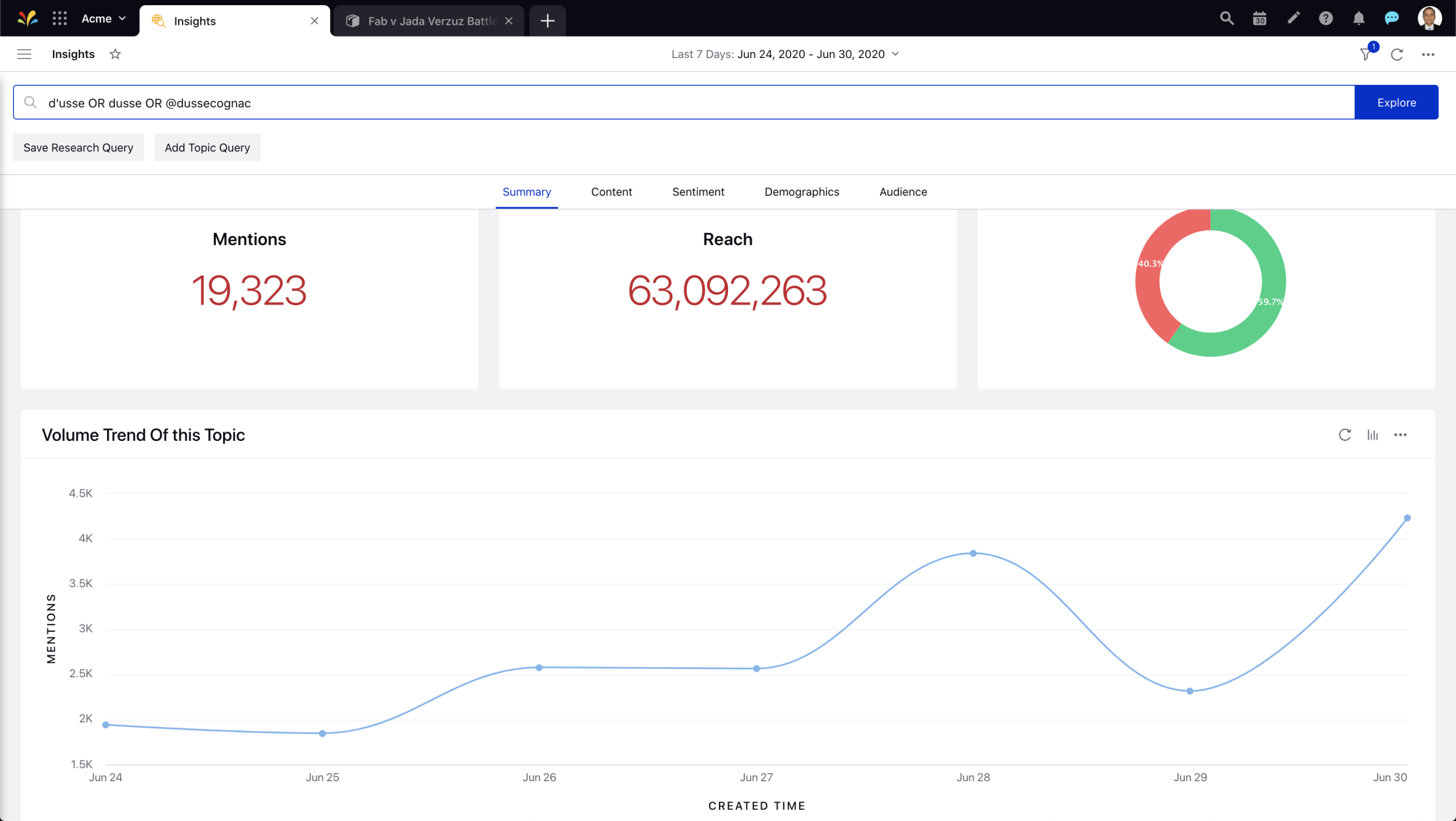 Throughout the event, Jadakiss was enjoying another beverage: D’usse Cognac. By the end of the night, he was having a great time, and the audience noticed. After a while, viewers were joking and commenting about how they were joining Jadakiss in the celebration. It was 2:00 in the morning for me and I had work the next day. But like one of Pavlov’s dogs I went online to see what the local options were for buying some D’usse. Just like that, I’m a D’usse prospect.

I wonder if anyone at D’usse even knew this was happening. The data shows a clear spike in the conversation around their brand, but did they notice? If the D’usse team had automatic alerts when conversations around their brand spiked, (positively or negatively) they could have taken action and engaged in real-time. Or they could have analyzed the conversation afterward and created custom content. They could even target this new audience with tailored advertising. Other brands are doing this. I hope D’usse was able to take full advantage of this moment. 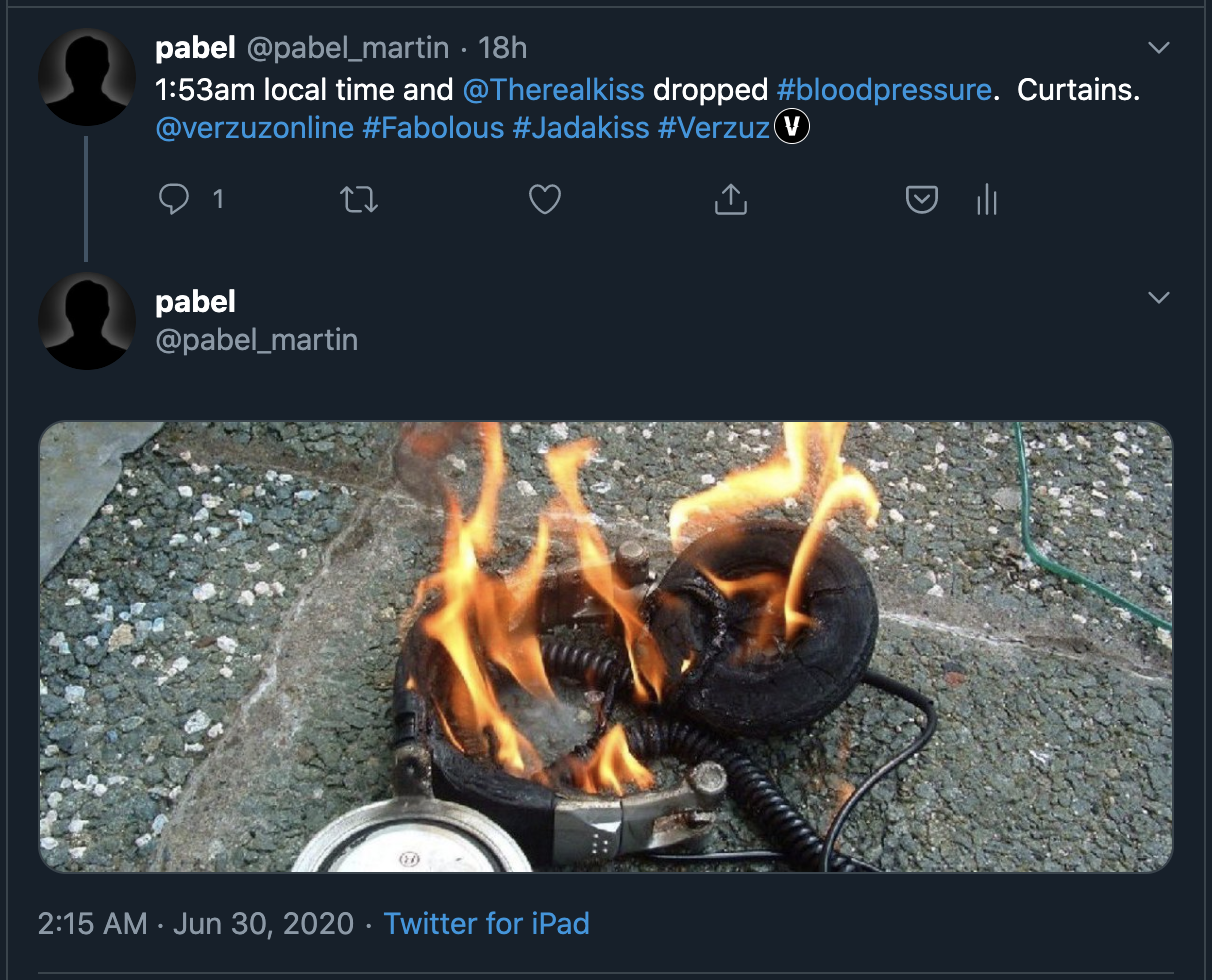 The team at Verzuz has done a great job of creating compelling and engaging events for those of us stuck in quarantine. I had Jadakiss as the winner pretty early, but stayed for every second of the battle and didn’t want it to end. 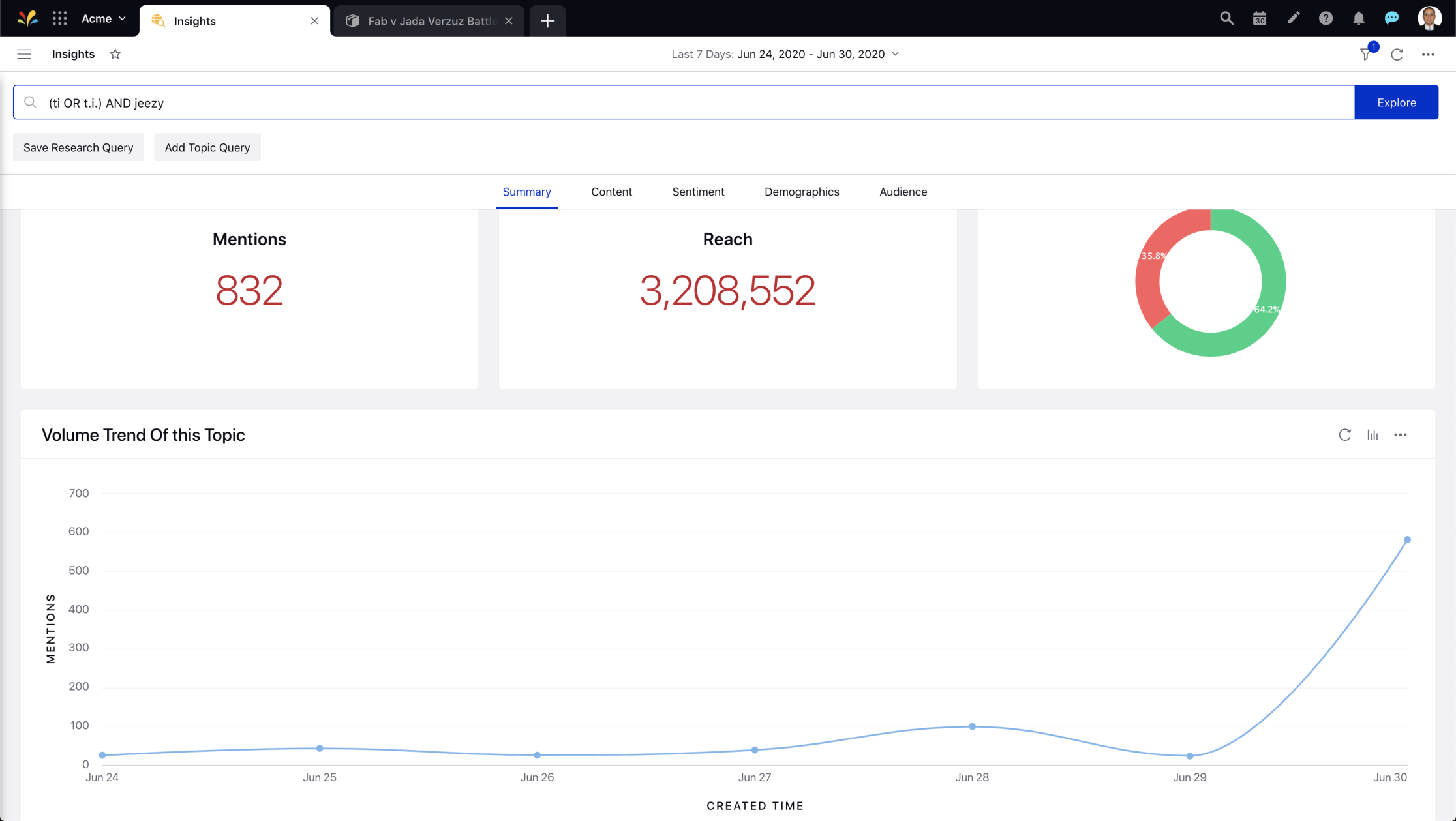 Which leads to the final question. There have been a lot of requests for the battles people want to see. Last night was no different. Personally, I thought Jeezy vs. T.I. would be a great matchup. Turns out I’m not alone. A quick look at the Sprinklr data shows a lot of other folks thinking it as well.

Now I just need to get some D’usse and hope that the next matchup is not on a work night. I’m too old for this.