“Black Friday” didn’t always refer to the most-hyped shopping day of the year. The term was first used in 1870 to describe the collapse of the US gold market the year before. It then popped up again in the 1950s in reference to the swarm of shoppers traveling to Philadelphia after Thanksgiving.

Now, it’s one of the most important terms for brands and marketers across the world.

According to Adobe Digital Insights, US shoppers spent a record $5 billion on Black Friday and $6.59 billion overall in 2017 – an almost 17% jump in both stats from 2016. The top-selling products were Nintendo Switch, Hatchimals, Chromecast, and Roku.

This is further proof that brands should use social listening to better understand what their audiences are interested in and build more engaging campaigns during the holiday shopping season.

With that in mind, let’s look at standout Black Friday social media marketing concepts that rocked social over the years.

Since Facebook launched its Live feature in 2016, broadcasts on the network have collectively racked up more than 2 billion views. The site also revealed that Facebook Live videos generate 3x longer watch times and 6x as many interactions as non-live videos.

Apparel brand MeUndies demonstrated the success of this platform by hosting a two-hour Facebook Live event on Black Friday in 2016. The company invited its 314,000 followers and launched targeted ads to others who opened MeUndies emails but hadn’t made a purchase in over a year. As a result, they generated 13,300 views, almost 6,000 engagements, and a whopping conversion rate of 25%.

“We wanted to give a thank you to the people who follow us, and gift them an extra bonus for being so awesome,” said MeUndies customer acquisition lead, Hailey Pink.

The broadcast included a DJ, dance contests, and four exclusive discounts with promotional URLs. Viewers were also invited to win a free gift by posting emojis in the comments section, which was monitored by three MeUndies employees throughout the livestream.

“We were very excited to have a limited-time audience for a limited-time sale,” said MeUndies director of brand marketing, Steph Young. “If you choose to spend a half an hour with us on any given day, we can reward you with a code that will be live during that time. That’s something you couldn’t do with a normal Facebook video because you don’t know when people are going to be engaged with it. With this, we know how many people are viewing and that we can reach them at that particular time.”

How do you manage to drive 64% of all brand mentions on Twitter during the biggest shopping days of the year? Just ask Kohl’s.

During Black Friday in 2014, the retailer launched a week-long #KohlsSweeps trivia contest on Twitter, in which participants could win gift cards for answering questions. Kohl’s posted contest content every 15 minutes on the big day, and expanded its audience by tying questions into timely partnerships with the American Music Awards and Disney’s “Frozen.” 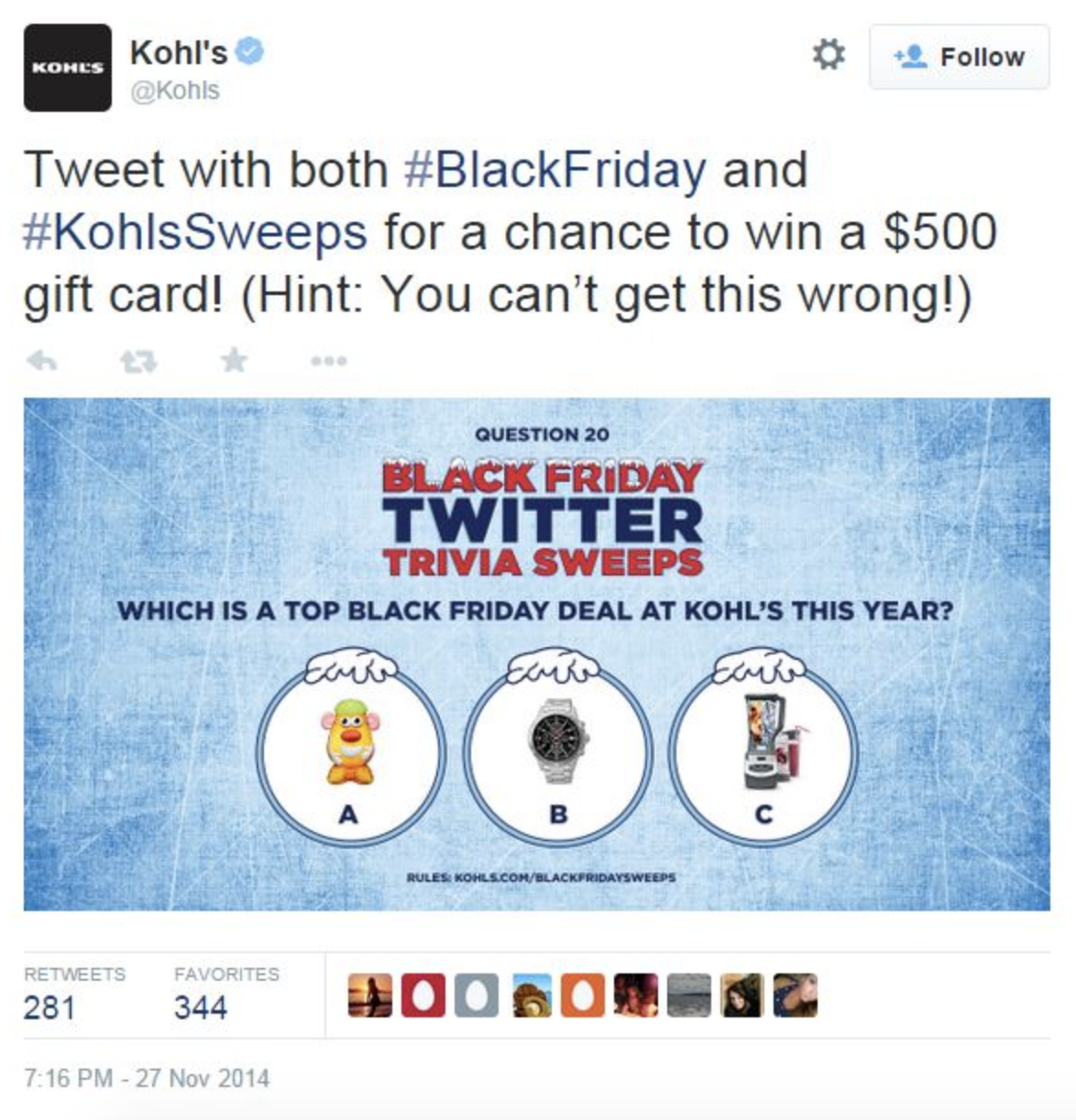 Kohl’s also used social listening to monitor and join in on the overall Black Friday conversation on Twitter. For example, when Detroit Lions linebacker Kyle Van Noy asked his followers about the best Black Friday deals, the brand quickly stepped in and Van Noy played along, getting his audience on board. 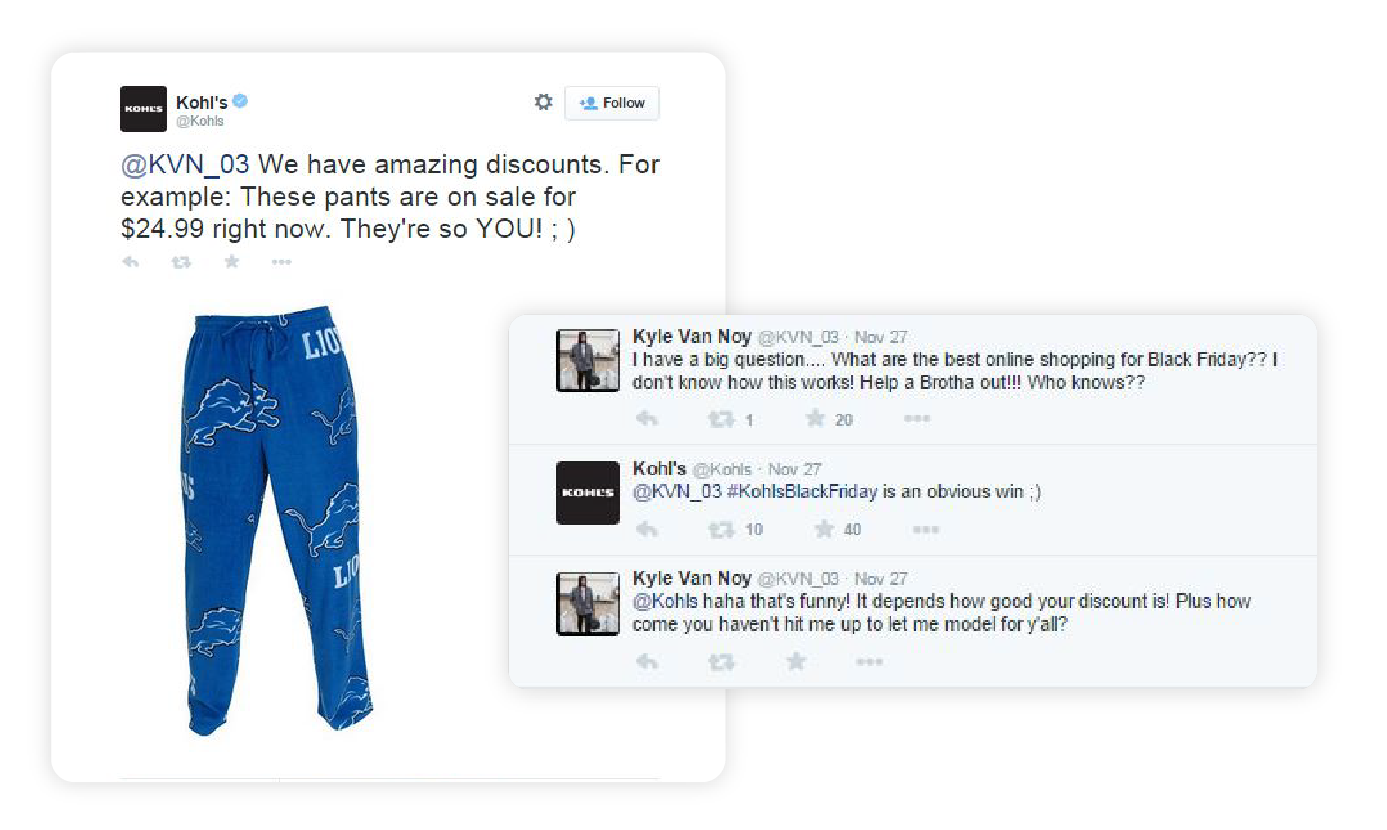 As a result, Kohl’s generated over 450,000 engagements (up 400% from the year before), landed on Twitter’s Trending Topics list multiple times, and saw a 234% lift in percentage of positive sentiment.

Robert Frost famously wrote: “Two roads diverged in a wood, and I—I took the one less traveled by, and that has made all the difference.”

That’s the philosophy behind REI’s Black Friday campaign, #OptOutside, which has been called a model for the future of marketing. Instead of joining the rat race of Black Friday, REI turned its back on the tradition in 2015 by closing all of its stores, suspending e-commerce, paying employees to enjoy the day outdoors, and encouraging consumers to do the same. It’s a prime example of how REI runs its business as a consumer co-operative (or co-op), with stores owned and operated by consumers who truly value the brand.

As Charles Trevail wrote for AdAge, “REI’s much-lauded decision is an example of what happens when a brand has a truly empathetic understanding of its customers and uses that understanding to create experiences that customers value.”

It might’ve been a risk, but it certainly paid off. According to REI, 1.4 million people pledged to #OptOutside, and the hashtag generated 1.2 billion social impressions. The campaign also won an array of awards and generated a great deal of press for its boldness and message.

It was so successful that REI continues to run this campaign every year. In 2018, they’re partnering with the University of Washington to launch an academic center called Nature of Health, which will research how being outside impacts our wellbeing.

“Black Friday” might’ve once referred to the collapse of the US gold market, but now it’s an invitation for brands to strike gold on the biggest shopping day of the year.

If past seasons are any indication, customer purchases on Black Friday and Cyber Monday will skyrocket again in 2018, giving marketers even more cause to get those social media campaigns ready. In fact, US digital ad spend is expected to reach $23 billion during these days.

The good news is that marketers can use successful campaigns of old to guide their way. Whether you choose to go live on Facebook, host a contest on Twitter, or rebel against Black Friday entirely, there are many strategies that can help you cut through the noise and come out on top this holiday season.