How 3 Consumer Brands Use Humor to Create Memorable Brand Experiences

In a post-truth world where data scandals and brand safety issues are never far from the headlines, humor can help brands build and maintain consumer trust. It allows brands to showcase more of who they are and what they believe – creating a more genuine and loyal relationship with consumers in a funny way.

Numerous precedents exist among consumer brands. Dollar Shave Club’s memorable tongue-in-cheek advertising debut inspired a meteoric rise that led to its $1 billion purchase by Unilever. Meanwhile, Oreo’s Super Bowl masterstroke in 2013 has been lauded as one of the greatest examples of real-time marketing.

At its best, funny content is attention-grabbing, relatable, and shareable. Fortunately, many consumer brands have a wonderful sense of humor. Here are three prime examples of funny branding.

The online battle to own how America sleeps has been heating up in recent years.

Among the startups hoping to become America’s mattress of choice, there’s Purple, whose mattresses are designed to relieve pressure in your back; Eight, which tracks your sleep cycles using monitors; and Tuft & Needle, whose mattresses start at $350. These brands are competing with established players such as Saatva and Amerisleep.

The brand making the biggest impact, however, is Casper.

Casper has enjoyed great success since launching in 2014, and is taking its online success offline: the company plans to open 200 retail stores in the next three years. In the meantime, Casper’s latest advertising campaign focuses on promoting its existing retail ventures, including the brand’s multiple New York City stores. 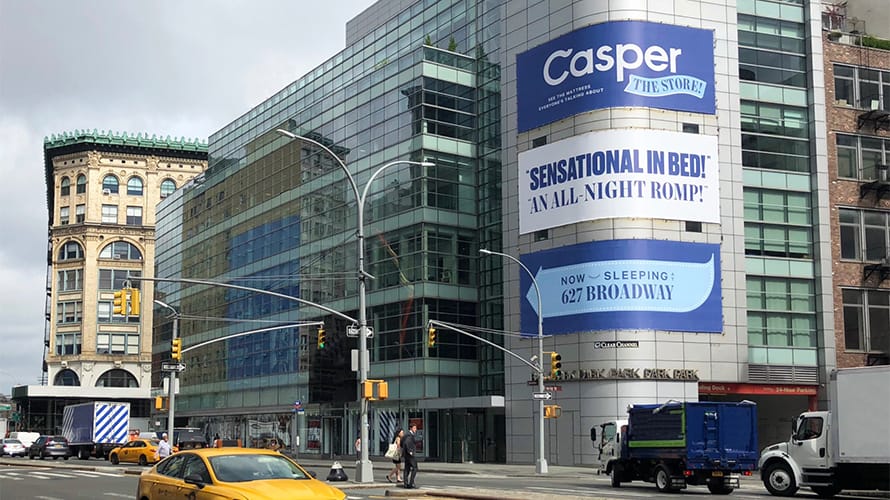 The focal point of these ads are gushing (made-up) quotes like “Sensational in bed!” or “A total snooze fest!” Printed in old-fashioned fonts, these humorous ads invoke the feeling of a Broadway playbill, ideal for New York City. 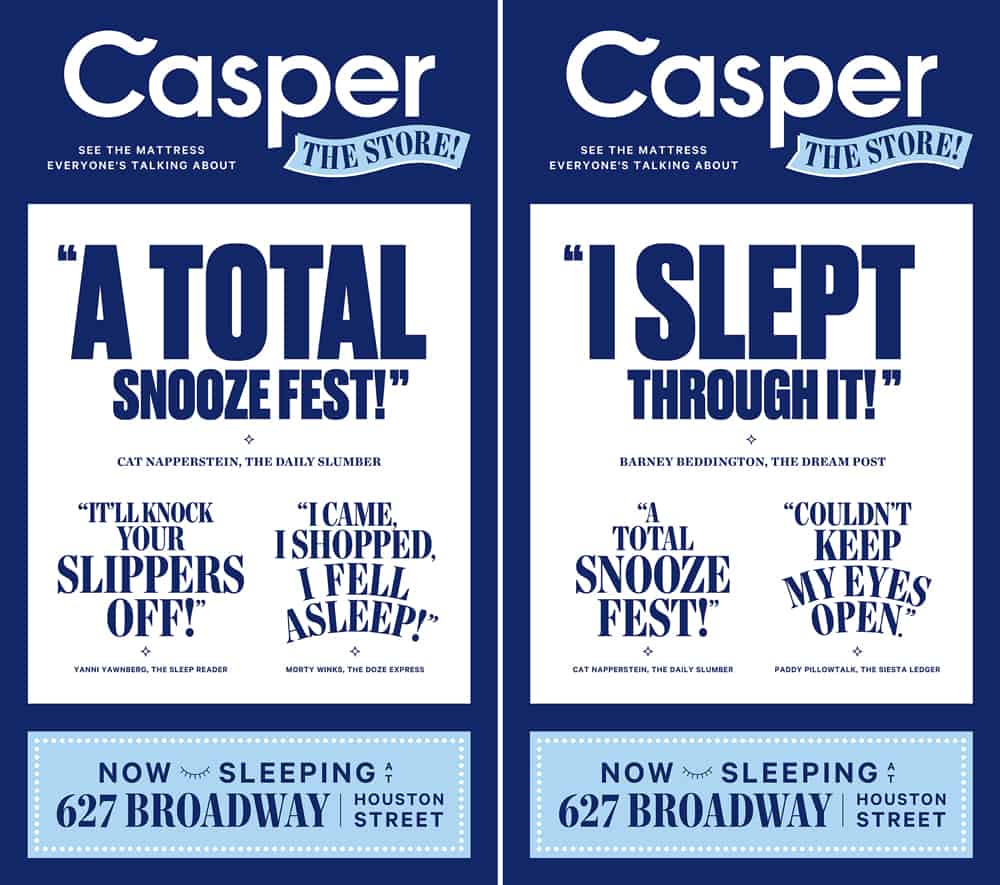 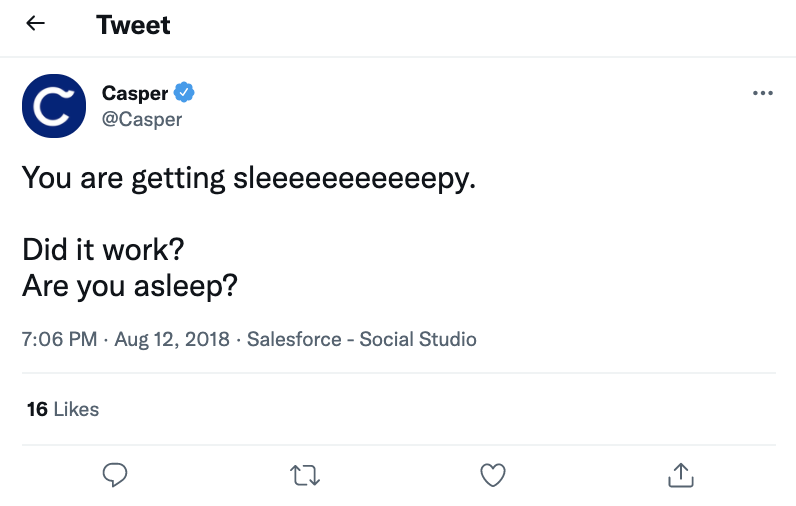 If the above tweet has inspired sudden tiredness, then a visit to The Dreamery, Casper’s new $25 per session nap store in downtown Manhattan, may be in order.

Once upon a time, commercials for insurance companies followed certain formulas.

There were the ads featuring happy families, with a voice-over promising that everything would be okay for those who chose the right insurance. There were ads with images of fires, floods and tornadoes, striking reminders of how quickly things could go wrong. Then there were the testimonials from satisfied customers, and monologs from insurance agents about their devotion to duty.

For the most part, insurance was a solemn business. These days, however, you would be hard pressed to find an insurance company that isn’t all in on humor. Consider GEICO’s absurdity and NFL legend Peyton Manning’s vocal efforts for Nationwide.

Online insurance company Esurance recently joined the laughter party, enlisting its first-ever spokesman, actor Dennis Quaid. In an ad attached to Esurance’s very self-aware brand refresh, Quaid breaks the fourth wall, acknowledging that he is in a commercial and speaking directly to viewers to tout some of Esurance’s features, like easy-to-use online experiences, streamlined claims filing and affordable rates.

After streamlining its services, the Allstate-owned brand is aiming to convey simplicity with the new tagline, “Esurance: Surprisingly Painless.” The campaign emphasizes authenticity and transparency, while the humorous fourth-wall breaking approach may also prove appealing.

MoonPie has mastered the art of being funny on Twitter (@MoonPie). The product is a chocolate marshmallow confection, yet many tweets read like the thoughts of a lonely, love-sick man deep in the throes of middle age. Punctuation is often ignored, and you can never be totally sure where a tweet is heading.

Linda is a recurring character in tweets filled with humor and self-deprecation. Other tweets, meanwhile, prove that modesty isn’t always the best policy.

A lot of people ask me “Hey, are MoonPies any good” and I would say I’d probably eat them even if I didn’t work here that’s a pretty big endorsement

A tongue-in-cheek, occasionally sassy strategy works wonders for MoonPie, a 101 year-old brand lauded for its absurd humor and brutal roasts.

Laughter is a universal language

The beauty of humor is that one size does not fit all. It’s personal and unique, meaning each and every brand has its own interpretation. For some, it’s the foundation of exciting advertising campaigns. For others, it’s part of the brand’s DNA.

Today’s digital and social media-fueled world is always evolving, but humor is the one constant. It never goes out of fashion and serves as a consistent source of relief.

Funny brands who provide such relief to consumers may very well enjoy the last laugh.