College. The best years of our lives. They pass by quickly, but the memories they provide remain clear as day. For countless generations, graduates could only reflect on their college years through memories (and maybe some Polaroid collections) – but then social media came along.

Students in recent years have grown up communicating and sharing their experiences on social media, flaunting memorable moments on Instagram and friends’ terrible dance moves on Snapchat.

However, students are not the only socially savvy bunch. Colleges themselves have embraced social as a digital marketing tool, using the power of engaging content on multiple platforms to attract prospective students, interact with current students, and stay connected with alumni.

Here are five social media marketing colleges that score the top grades – as determined by Sprinklr Business Index® (SBI®), which measures and analyzes the breadth of public interactions between brands and consumers across social media.

The University of Alabama

When you think about Alabama, football likely comes to mind. The Crimson Tide boasts one of the finest trophy cabinets in America, claiming sixteen national championships (or twelve, depending on who you ask).

The team has experienced great success under head coach Nick Saban. And in a blockbuster 2017 season opener, no. 1 ranked ‘Bama put down an impressive marker, laying waste to then no. 3 ranked Florida State.

Win the Greatest Opener of All Time! ✅ Road to 17 starts now. #RollTide

Alabama may be quite expert at the gritty business of football, but it also has a rather pretty side. Southern Living recently named UA as one of the most beautiful college campuses in the South. Prospective students would likely consider the campus very “Instagrammable”.

Posted by The University of Alabama on Wednesday, August 16, 2017

SBI® statistics indicate that the good times (and tides) just keep on rolling for the University of Alabama. A content insights score of 9.0 contributes to an overall brand score of 8.3.

The oldest university in the United States is known the world over, not only as a leader in academic prowess, but also for being incredibly photogenic.

Many young people harbor ambitions of attending Harvard: take Michael Medaugh as an example. Now a freshman at Harvard, Medaugh exchanged letters with Harvard’s President as early as seventh grade.

The young man from rural Pennsylvania is the first student in his school district’s history to attend Harvard, and will undoubtedly look to make more history in the coming years. 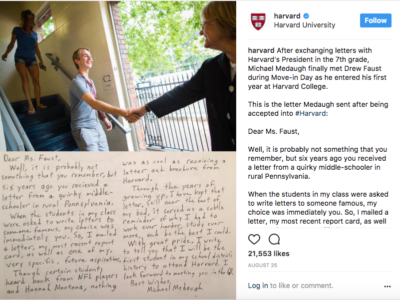 Indeed, students like Michael Medaugh are attracted to Harvard’s historic reputation in research and academics. Since the university’s founding in 1636, the world has changed in remarkable ways. Nowhere is this more apparent than in technology.

Researchers at Harvard are harnessing technology in the field of robotics, developing soft robots that can be worn as clothing. These wearable exosuits can reinforce and support recovering stroke victims. Although still in relative infancy, one can easily imagine a not-too-distant future where robots play a prominent role in patient care.

SBI® statistics indicate that Harvard is a pioneer on social media. Over 18,000 content engagements per day contribute to an industry-leading audience insights score of 10.

Another institution with strong sporting heritage, MSU Spartans are so named after the legendary Ancient Greek army. The heroic warriors were brave and undaunted in the face of battle, and these same characteristics are expected of MSU Spartan athletes today.

A notable way that universities can increase the value of the education they provide is by showcasing the careers and achievements of alumni. Such stories not only reconnect alumni, but grow the school’s exposure to prospective students on social.

Ever been to Amore Trattoria Italiana in Grand Rapids? The award-winning restaurant, which uses locally sourced ingredients, is owned by MSU alumna and chef Jenna Arcidiacono. #MSURoadTrip

Students of MSU are lucky enough to study just a few hours from Lake Michigan. A popular Spring break haven, it is the only one of the five Great Lakes located entirely within the U.S.

However, none of the Great Lakes are immune to danger. MSU researchers are doing their level best to fend off sea lamprey, parasitic creatures that once almost wiped out commercial fish in the Great Lakes. Members of the public appreciate the efforts of MSU in this case.

Protecting the Great Lakes from invasive sea lamprey is the goal of a team of researchers from MSU. #MSURoadTrip

The Spartan efforts of MSU on social media are paying off. SBI® statistics show an impressive audience insights score of 9.4.

NYU is located between Midtown and Downtown in the beating heart of New York City. On social, the university takes full advantage of its spectacular vantage point, offering audiences some of the inspiring views from campus.

View of Bobst Library and One World Trade Center from University Place. #NYUSummer

However, the university does not just rely on its city center location to attract prospective students. NYU has a stellar reputation academically and, in the 2017 Academic Ranking of World Universities, NYU came in at number one in Finance, ranking highly in other areas including Law and Mathematics.

Congrats to the NYU schools and departments that placed atop the 2017 Academic Ranking of World Universities:…

The combination of awesome views and leading academics can urge young people to take their next steps at NYU’s iconic Washington Square center, a hub of activity culturally and socially.

NYU is giving the Big Apple an even bigger reputation on social. SBI® statistics show an audience insights score of 9.1.

Princeton boasts one of the most “Instagrammable” campuses of all, with architecture that wouldn’t look out of place in Hogwarts.

Drones have been in the headlines recently, largely due to Amazon’s development of Prime Air, a drone delivery service.

Undergraduate researchers at Princeton have been hard at work on drone technology. Specifically, they are creating a self-charging drone system where drones will autonomously land on solar charging platforms. An error range of just thirty centimeters indicates that the students are making great strides.

This summer, a team of undergraduate researchers under the guidance of assistant professor Minjie Chen, have been working on creating a self-charging drone system: http://ow.ly/v8mC30ejGrD

Making The Grade On Social

Leading American social media marketing colleges are using social to elevate and frame their value proposition. Whether it’s prowess in academics, research, or athletics, colleges use a mix of engaging content to highlight what they can offer to students.

When deciding on colleges, young people are likely to use their parents and older siblings as sounding boards. And with usage of social media by adults over 30 rising consistently in recent years, colleges can make a potentially decisive impression when it really matters.

With the right strategy in place, colleges can win the hearts, and especially minds, of audiences.