A Quick Guide to Social Media Terms, Definitions, and Jargon

For executives who are newly exploring social media, one of the greatest barriers to entry is simply digesting the colloquialisms that this form of media has so openly embraced. New users to a social media site are promptly presented with a myriad of unfamiliar phrases or baffled by a series of recognizable terminology that have been repurposed and redefined. And as each channel emerges, so do new slang, new culture, and redefinitions of space.

With an ever-evolving array of new social media terms, how can a newbie jump in stay on top?

While social media terminology can be intimidating at first glance, there is a simple process to internalizing a large majority of social media idioms. The majority of social media lingo gets their roots from the social networks themselves. Twitter gave birth to the words “at reply,” “direct message,” and “retweet” amongst others. Facebook invented the “fanpage” & the “status update.” Definitions stemming from these sites and circulating around the social sphere can be boiled down and organized into 9 simple categories:

To help new users get started, we have mapped these categories to the terminology of choice for each of the top social networks. Now it’s easy to determine the right social media term to use for whatever network you are discussing. 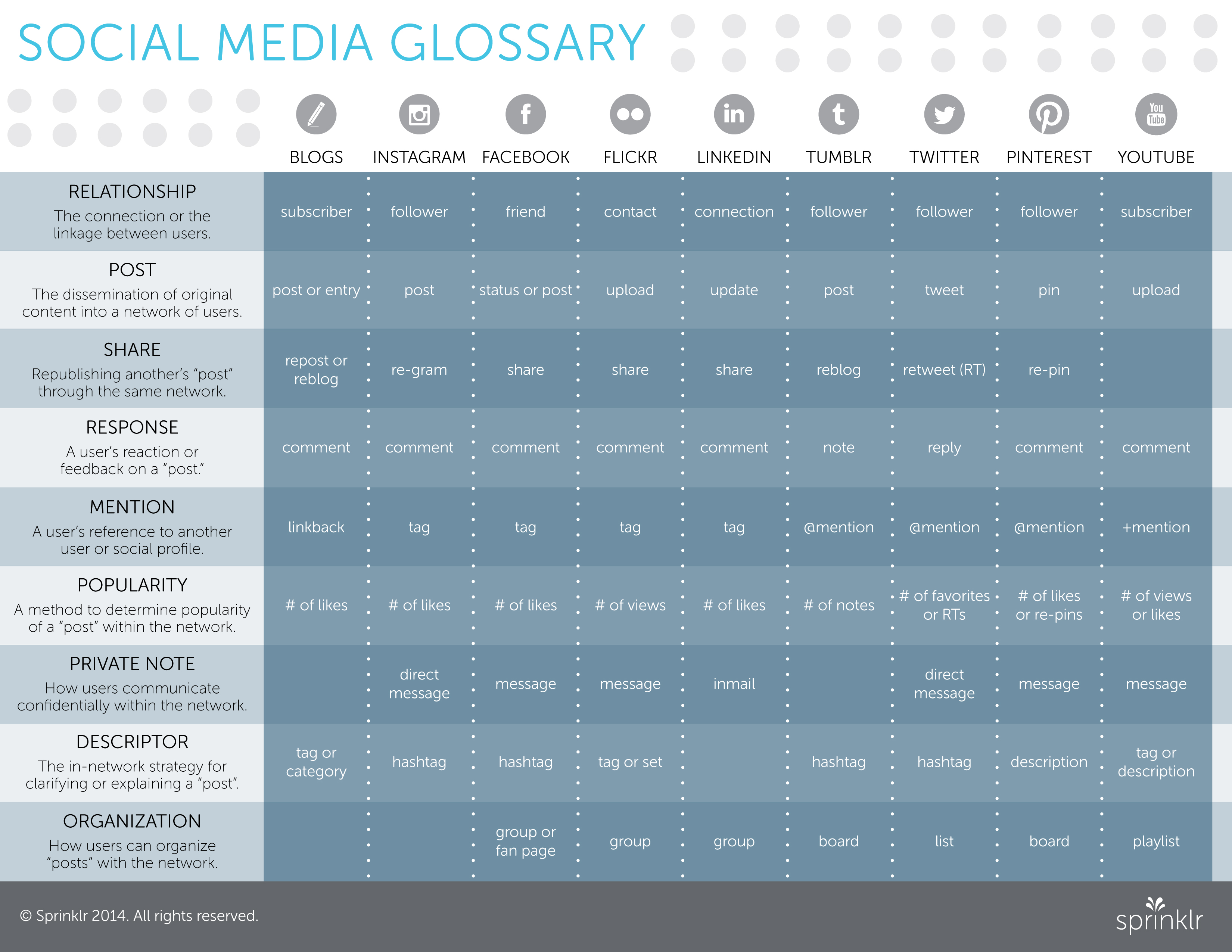 Now that we’ve defined the basic slang, there’s still a myriad of words that describe things in social media broadly that do not relate to a specific site or social network. More often than not, these new social media buzzwords sound a bit familiar; they are frequently recognizable bits of vocabulary that have be repurposed and redefined.

Below is a list of several words that pop up time and time again when people discuss social media. Learn them, and you’ll be a social media master in no time — or at the very least, you’ll sound like one.

Crowdsourcing: This term is searching out an answer, solution, completion of a task, etc. through one’s social network. Crowdsourcing relies on the idea of collective intelligence or the thought that a group’s knowledge exceeds that of the individual. Many have argued that for crowdsourcing to be effective, the asked community must be diverse, qualified, and robust.

Curation: Content curation is the natural activity of aggregating, ranking, and assigning value to content. The original source of content is nearly irrelevant in the purest form of curation, as the focus is acquisition of real-time, high-value content and knowledge. Content curation got its birth from the “wiki” and has gained popularity recently as a result of the recent success of the social site Quora. Unlike traditional organization, content curation (in the new media sense) is reflective of both individual and collective perception and evolution of thought. The user thus relies on the community to engage and help determine what is personally most valued and useful. Thus the cultivation of a reliable network itself is a part of the curation process.

Influencers: These are individuals who have the ability to sway the behaviors, thoughts, or actions of their community. There are several methods by which the social media community currently determines influence, such as:  follower/ friend count, professional title, frequent topics of discussion, or authority metrics such as Klout score. In Keller and Berry’s 2003 book, “The Influentials,” they proposed that influencers hold five standard attributes. Influencers are activistic, well-connected, trusted by others, have diverse and active minds, and are early adopters.

Meme: This word was originally used in science to explain virility in thought, regardless of truth. The social media variation of this word leverages the concept of virility in the word’s original definition and instead applies it to content. Therefore, a meme is a popular trend of discussion in social media. A meme can stem from web content, popular culture, or pretty much anywhere. The origin of a meme is as unpredictable as the topic is catchy.

Mashup: The term mashup was borrowed from the music industry and was used to describe the mixing of two more songs. Similarly in the social sphere, mashup is slang for web-based applications that combine at least two different existing websites. This potential to merge data and applications from several sources into a single application is often considered to be the beginning of the web service standard or on-demand computing.

New Media: New Media is often used as another way to call social media. However, more appropriately used, new media refers to communication that facilitates collaboration and participation of users. Content that is stagnant or one-way, regardless of method of deployment, is not considered new media.

Social Graph: The social graph is the global mapping of all relationships in the social space. More specifically, each user has a unique map of connections and therefore a unique social graph. Graphs are composed of two types of connections. The first type of connection is two-way — where both users bust accept the association (such as with Facebook). The second type of relationship is one-way, where a user can choose to follow the activities of an individual without that user’s permission (e.g. Twitter, Instagram, etc).

Troll: A troll is someone who posts irrelevant, off-topic, and inflammatory content in a social site. A troll’s main objective is to startle others and disrupt normal discussion. Trolls who post to brand social properties often have a primary goal of igniting negative responses from other users, and potentially the brand itself.

Wiki: A wiki is term used to describe a webpage that users can create and edit page content using a standard browser. Wikis allow for the organization of content in addition to the creation and editing of said content.  This social utility facilitates open editing and relies on the community to enforce accuracy and efficacy.