How 6 Brands Succeed in Social Responsibility

In today’s politically charged world, brands can’t afford to sit out of the conversation. They need to be deliberate and transparent about the causes they support – even building whole campaigns and partnerships around those issues.

It’s not just the right thing to do; it’s what customers want.

According to Edelman’s Earned Brand 2018 report, 64% of global consumers – up from 51% in 2017 – would choose, switch, avoid, or boycott a brand based on its stances on political and social issues. This is especially true of younger buyers: More than 90% of millennials would switch from a brand that doesn’t affiliate with a cause to one that does.

WWE is known for its hardcore wrestling showdowns, but outside of the ring, the brand has a softer side. The media company recently announced that it will be partnering with the Special Olympics World Games in 2019, a global sporting event that features thousands of athletes with intellectual disabilities.

As the face of the partnership, WWE Superstar Sasha Banks will join other wrestlers and WWE executives to participate in various events around the world. WWE will also air the games on its TV channels and digital platforms, and develop promotional content for the global event. 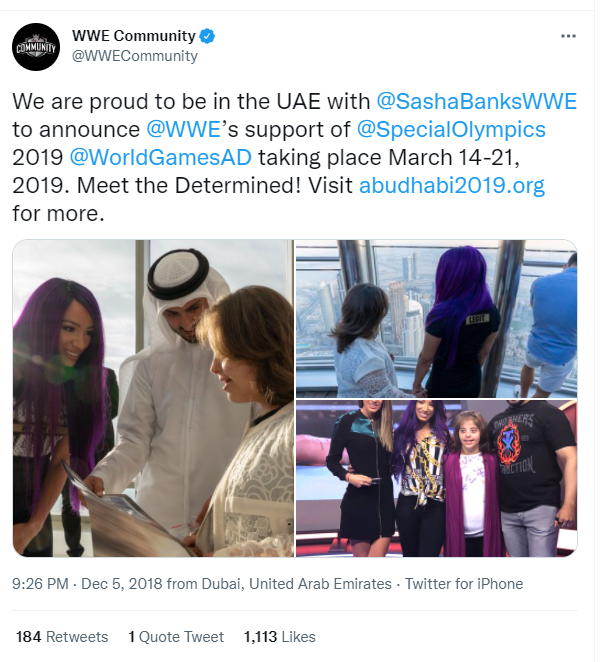 This is only the most recent phase of their partnership, which began when WWE was a founding partner of the 2014 USA Games.

United Airlines is also a longstanding and outspoken partner of the Special Olympics. For the fifth season in a row, the company helped spread holiday cheer by flying 35 Special Olympics athletes to the “North Pole.” The kids took a short trip up in the air, and when they landed, the airport terminal was transformed into a fantastical winter wonderland. Each athlete was greeted with gifts, letters from Santa, and of course, the big guy himself.

“It does take months of planning, a lot of volunteers and a lot of support from the community,” said volunteer Tammy Castro. “It’s all about giving … it’s that feeling inside, that indescribable feeling. That’s why I do it.” 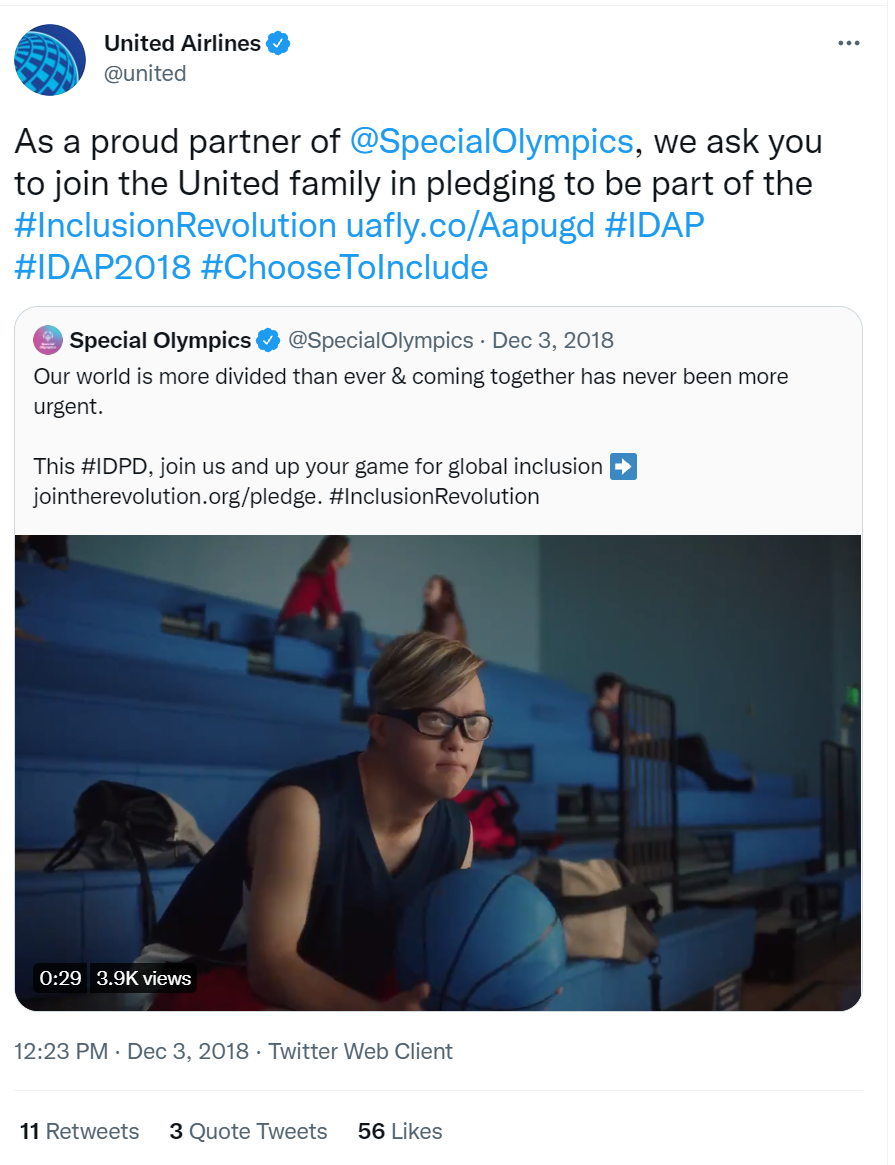 Customers and employees alike are encouraged to contribute to the cause. United customers can donate their miles to the Special Olympics as part of the Charity Miles program. Employees volunteer and fundraise for events like the Special Olympics 50th Anniversary celebration in Chicago. And United built special employee training programs for serving customers with intellectual disabilities.

Unilever has one of the most comprehensive sustainability efforts in the corporate world. In 2010, the brand launched its Sustainable Living Plan, which was created to improve Unilever’s environmental footprint and increase its social impact.

Unilever uses the hashtag #sustliving to share its sustainability efforts across social media and encourage audiences to share their own. 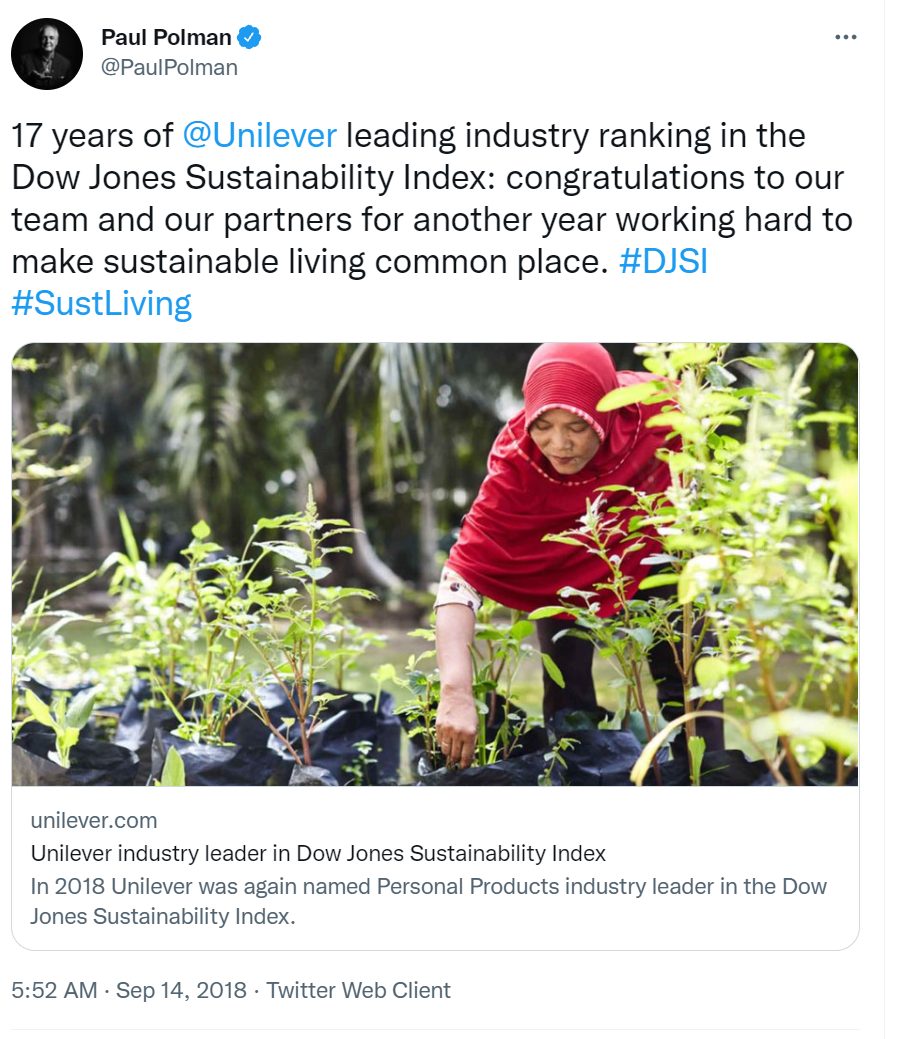 Most recently, Unilever announced that it will invest €100,000 in a crowdsourced campaign for a plastic-free laundry tablet. The product came from Unilever’s #RethinkPlastic Hackathon, a one-day event that challenged leading designers, innovators, and venture capitalists to build a solution for reducing plastic waste. The brand also announced in 2017 that its plastic packaging will be fully reusable, recyclable, or compostable by 2025. 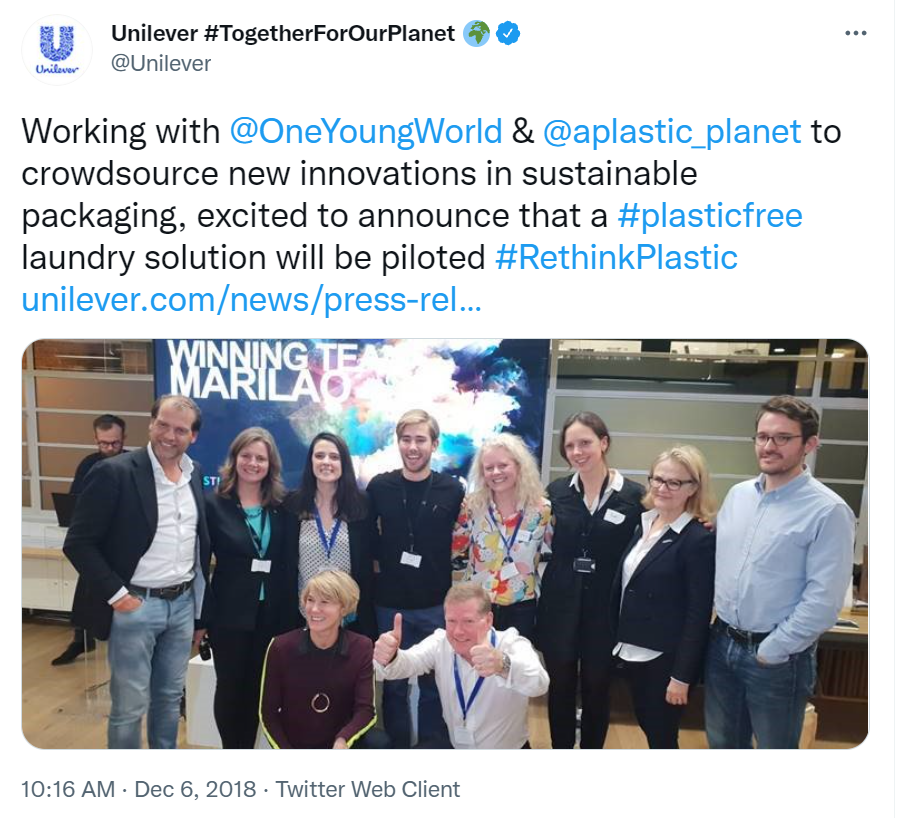 These sustainability efforts aren’t just good for the world; they’re good for the business, too. A recent report showed that Unilever’s most sustainable brands – including Dove, Vaseline, and Lipton – grew 46% faster than the rest of the business and delivered 70% of its turnover growth.

Pharmaceutical brand Merck landed on the Forbes #Just100 list of companies “doing right by America.” And for good reason. 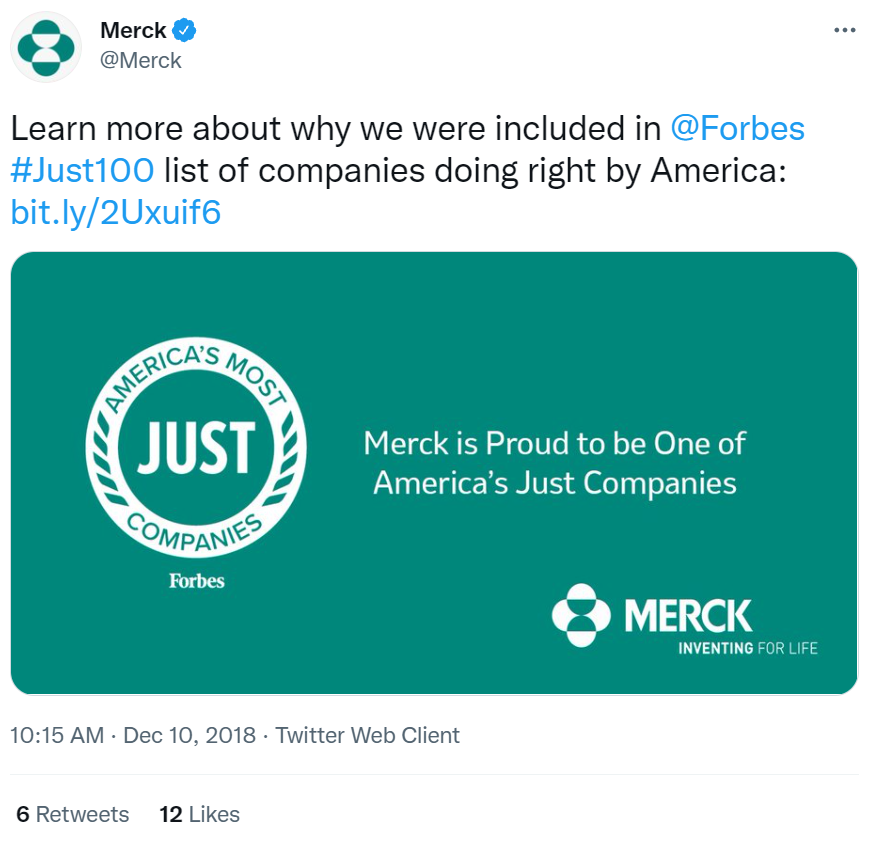 Corporate responsibility lies at the heart of Merck’s mission with programs like Merck for Mothers: a 10-year, $500 million initiative to improve access to maternal health care. Merck also launched the #EverydayReality campaign to raise awareness for American Diabetes Month. 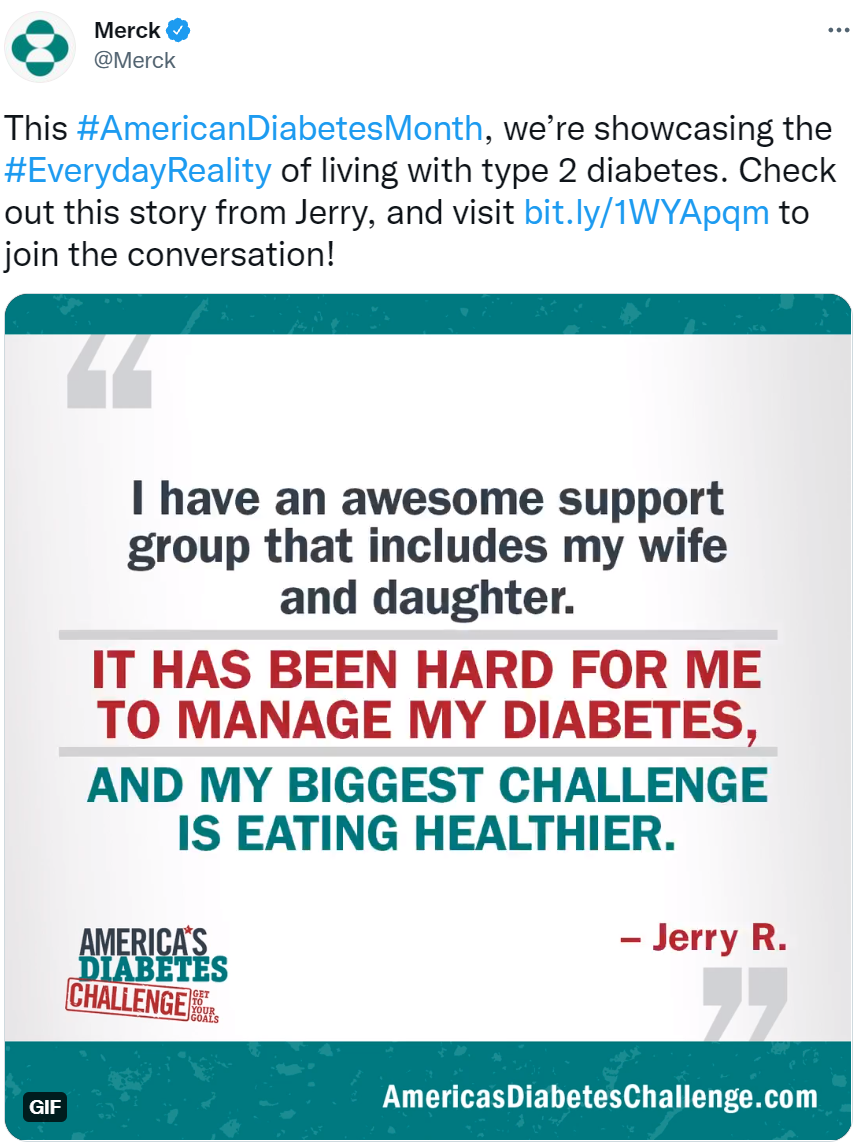 The social campaign shares stories of Americans living with diabetes, and the struggles they go through each day. To keep the conversation going on social media, Merck invites others to tell their own stories at the American Diabetes Challenge website.

In 2006, Pepsi launched Performance with Purpose, an initiative to deliver “sustainable long-term growth while leaving a positive imprint on society and the environment.” It includes goals that Pepsi hopes to achieve by 2025 across three areas: products, planet, and people. For example, Pepsi plans to reduce added sugars in its products, lower carbon emissions, and create more job opportunities for sustainable farmers. 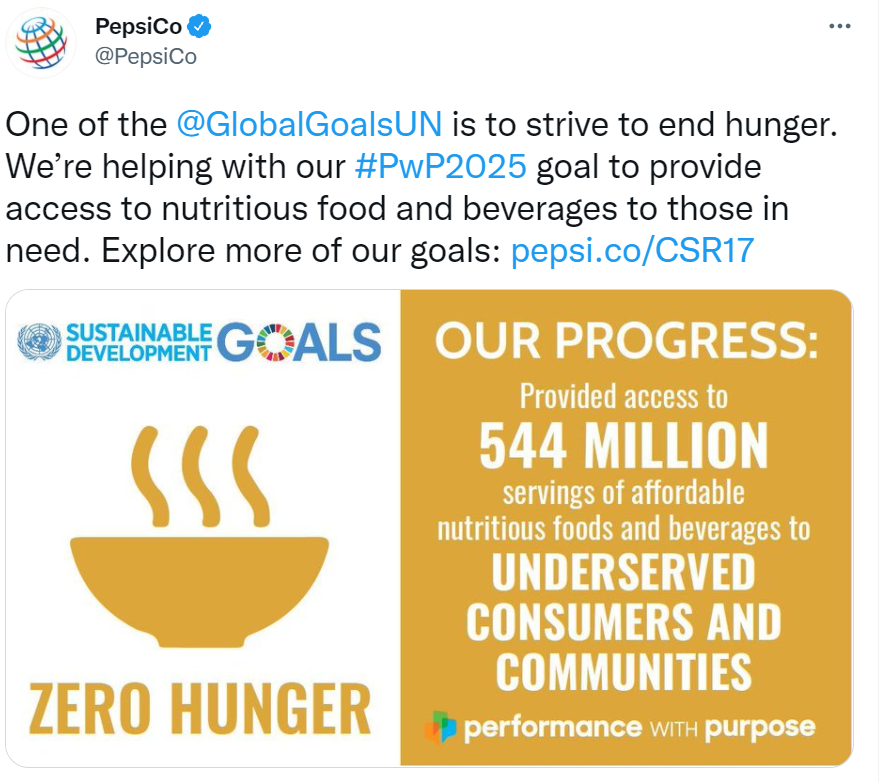 In 2011, Pepsi launched the PepsiCorps global volunteer program. In 2016, the company partnered with the UN World Food Programme to deliver food in Ethiopia. And just this year, Pepsi announced a new goal to use 25% recycled material in its plastic packaging by 2025.

“Our success – and the success of the communities we serve and the wider world – are inextricably bound together,” said Pepsi CEO Indra Nooyi. “Our aspiration of creating a good company – good ethically and good commercially – is now coming to fruition, yielding a broader, more lasting impact than we ever imagined.’’

Some brands take big steps to improve their global impacts. Other brands focus on making improvements on a smaller scale in the communities they serve. Office Depot does both.

In its 2018 Sustainability Report, the brand announced that 48% of its wastestream (totalling 27.6k metric tons!) had been diverted from landfills throughout the year. Office Depot also reduced its greenhouse gas emissions by 19%, and energy consumption by 11%, and recycled 6 million pounds of customers’ old toner and ink cartridges along with 1.5k pounds of cell phones and batteries.

Beyond its sustainability efforts, Office Depot shows its commitment to helping brands and their employees through its Workonomy Business Services. This offering serves as a 24/7 support network that provides businesses with everything from tech troubleshooting, to consulting, copy services, storage, and more. 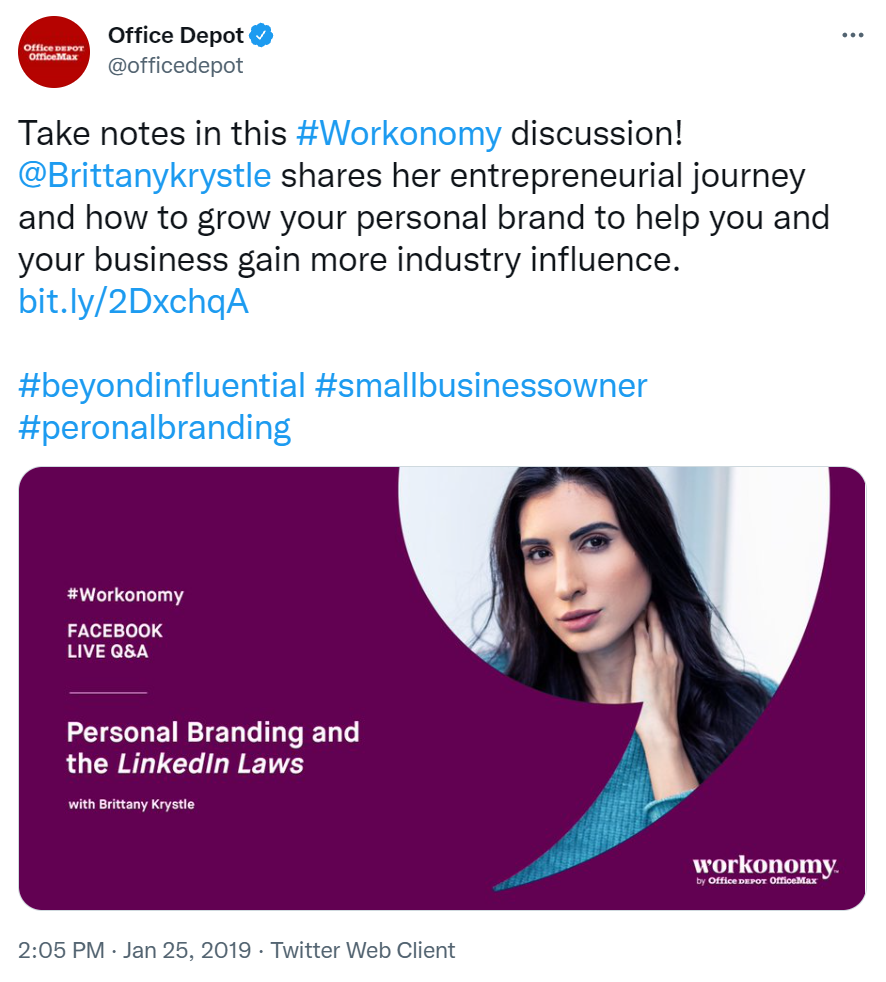 And if all of that wasn’t enough, the #DepotDifference highlights the many ways Office Depot gives back throughout the year. From back-to-school backpack drives, to holiday toy donations and more, the company is constantly finding ways to support local communities.

Corporate social responsibility isn’t just good ethics; it’s good business. Today’s customers want to know if brands give back to their communities, understand their impact on the environment, and take steps towards decreasing their footprint. Brands that don’t risk losing customers to more socially responsible competitors.

That’s why it’s so important for companies to build partnerships and campaigns around social good initiatives, as the brands above have done. With social outreach strategies and easy-to-use hashtags, they let audiences know about their efforts and inspire others to join the conversation – building a better world for all of us.