The way that brands influence consumers has changed fundamentally. Traditional B2B and B2C marketing approaches have given way to a world of C2C: consumer to consumer marketing.

In a recent survey, 76% of individuals said they trusted content shared by “average” people more than by brands. How can brands harness this trend? By employing consumer user-generated content (UGC)

UGC is also much cheaper to implement than large marketing campaigns. And when one considers that 500 million of Instagram’s 800 million users engage with the platform every day, a plethora of potential UGC exists. This figure will only rise, and that’s why brands need to capitalize. Luckily, some brands are leading the charge.

Here are three such brands that take consumer generated marketing to a new level – determined, in part by Sprinklr Business Index® (SBI®), which measures and analyzes the breadth of public interactions between brands and consumers across social media.

If it ain’t broke, don’t fix it. The old adage applies to Apple’s “Shot on iPhone” campaign.

For the first campaign, “Shot on iPhone 6”– which went live in 2015, Apple won a number of prestigious Cannes Lions awards. The innovative campaign showed potential customers the benefits of using the iPhone 6 by taking real, user-generated photos and amplifying them publicly across the world.

Most recently, Apple captured one night around the world with user-generated iPhone 7 photos, which showcased the camera’s low light capabilities.

Shot on iPhone has become a core part of the brand’s marketing strategy. Not only is it proof of the product’s power, but its use of UGC focus allows customers to feel part of Apple’s large, enthusiastic community.

It should come as no surprise, then, that Apple created an official Instagram account, the natural online extension of the successful billboard ad campaign. Thus far, every photo posted on the account has been user-generated, with credit given to each photographer. 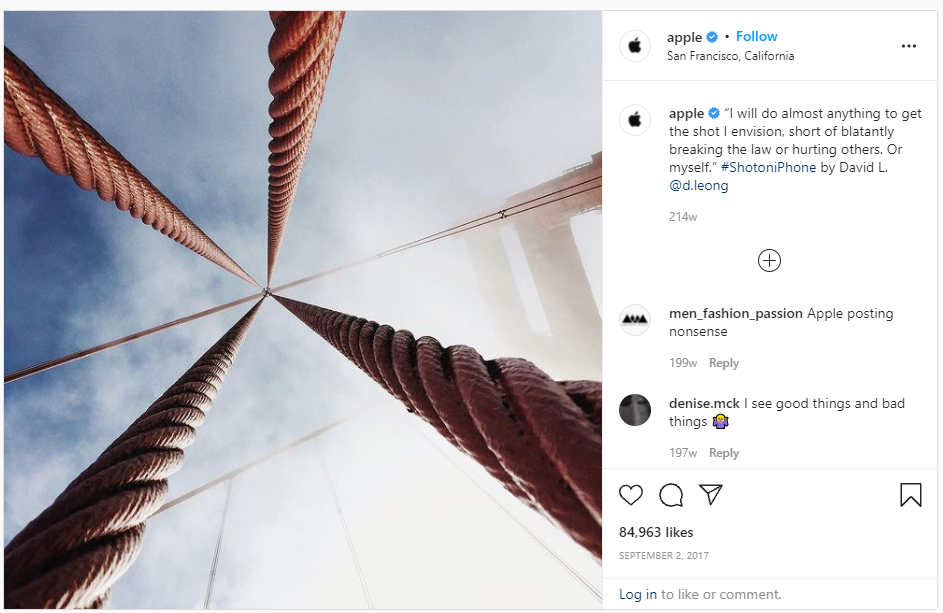 In many cases, Apple is leveraging Instagram’s gallery format and video capabilities to showcase multiple photos from creators. 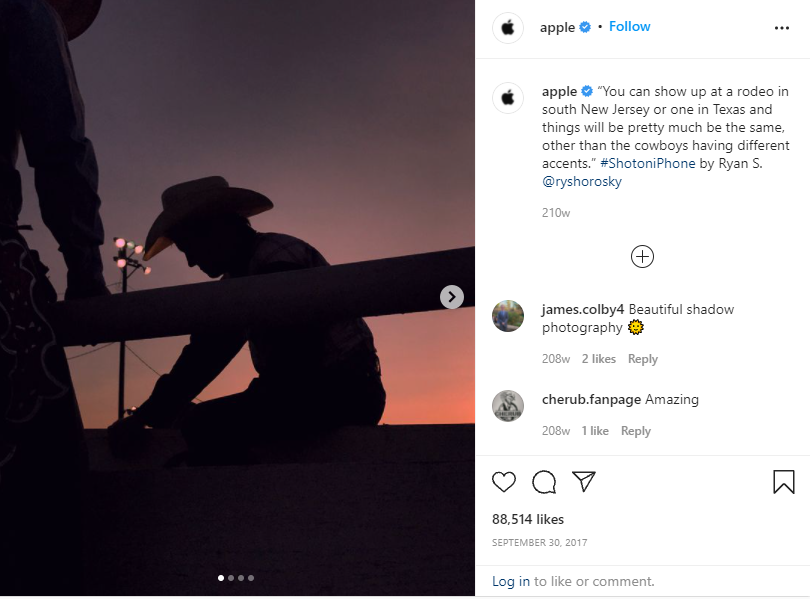 Of course, the timing of Apple’s move to Instagram coincides with September’s Apple Event, during which the iPhone 8 and iPhone X were unveiled.

The enhanced camera-based features of the new products may signal a doubling down on UGC, encouraging customers to share new and unique photo and video content.

SBI® statistics indicate that Apple’s move to social UGC is working perfectly. Two of the brand’s top five most engaging content pieces represent UGC, while the rest stem from the Apple Event.

The result: an impressive audience insights score of 9.8.

National Geographic, already known for its stunning visual content, has turned to UGC and tapped into the power of a photo community to great effect.

Through Your Shot, the brand has fostered a sense of belonging among users. Whether a hobbyist or professional, all visual storytellers are welcomed to the community by setting up a profile. This showcases the user’s best photography, favorite pictures, and achievements.

Themed assignments allow users to contribute their best photos in the hope of being featured in a published story. And as part of the Daily Dozen, a team of editors curates and selects their favorite user submissions to be featured online and in print.

Community members vote on their favorite which is then specially showcased on Instagram.

The brand also hosts contests like the Nature Photographer of the Year. Photo editors showcase their favorite entries each week, and the eventual grand prize winner will receive $7,500 and see their winning image featured online and in print.

Unsurprisingly, the bar has been set pretty high.

Thanks to assignments and contests, National Geographic has been able to access a huge collection of user-generated content. The community aspect taps into people’s inherent desire to be recognized and appreciated, and only serves to strengthen brand advocacy.

It’s clear that UGC marketing is being used to great effect. Brands like Apple, National Geographic, and Porsche have passed on the baton, realizing that their customers don’t just consume content, they also create and curate.

Gaining the trust of today’s youngest demographic, Generation Z, will prove especially vital for brands going forward. Goldman Sachs already considers Gen Z to be a more important generation for brands than Millennials. With good reason too: by 2020, they will account for one-third of the U.S. population.

Gen Zers represent the most technologically savvy and diverse generation. They crave authenticity, individuality, and they want brands to be loyal.

With great use of UGC, brands can prove to these consumers that they care.