The Complete Guide to Facebook Live for Brands: Part 1

That’s the audience marketers can tap into with Facebook Live.

Since it launched last August and became available to all users this January, Facebook Live has quickly become a game changer. Media companies like CNN, Viacom, the New York Times, and BuzzFeed have used Live to experiment with new video formats and expand their audiences.

Many brands have already carved out a chunk of the social network’s massive usership. Now they can easily share Facebook Live videos with fans, friends, and followers without having to build a new audience from the ground up.

Facebook is also sweetening the pot with helpful capabilities such as live events, two-person broadcasts, comment feeds, and filters. And they might launch mid-roll ads soon, which could give brands an alternative revenue source.

New metrics like peak viewers don’t hurt, either. By combining performance analytics from the livestream with data for the converted video (which lives on even after the stream is over), brands can get a deeper understanding of audience viewer habits. For instance, they can determine the sort of content that works best in a live setting – as well as what’s most successful over an extended period of time.

Given these benefits, many businesses – from auto manufacturers to makeup companies – are using Facebook Live to grow their audiences. Brands that are new to livestreaming, however, might be wondering how to plan and launch a successful Facebook Live video.

We’ve created a three-part guide that covers everything you need to know. Part one focuses on what to do before you launch your Facebook Live.

Understand What Facebook Live Can Do for Your Brand

Before you jump on the Facebook Live bandwagon, you should understand why it’s such a unique medium and how it can help you better market your brand.

For one, the real-time, unedited live video allows brands to showcase their authentic, human side. When a brand livestreams, everything is seen – all the mistakes, blemishes, and unscripted events – which means that live video makes a brand more accessible and relatable.

Sure, there are risks that come with broadcasting live to thousands or even millions of eyeballs, but a little planning can go a long way towards preventing a PR fail. Live video feels fun, spontaneous, and personable, which makes it hugely appealing for a brand’s audience, but this isn’t synonymous with lack of preparation. Since audiences don’t expect livestreams to be perfect, brands can worry less about flawless sound, lighting, and scripts, and instead focus on capitalizing on trends and current events.

Live video’s unique value is built on audience participation, as viewers can interact with the brand, and directly influence content. As a 2013 study by eConsultancy found, that personalization goes a long way: companies that personalize web experiences (and are also able to quantify the improvement) see, on average, a 19% uplift in sales.

Now that you understand what livestreaming can do for your brand, it’s time to get specific about what you hope to achieve through Facebook Live.

Start by reviewing the goals for your company, marketing department, and social media strategy. Ask yourself:

Once you’ve determined exactly how live video supports your marketing and social media strategies, along with the goals you want to achieve through livestreaming, it will be much easier to design your first Facebook Live campaign.

Select the Right Approach for Your Facebook Live Video

Facebook Live video can take many forms and be used for a variety of purposes, such as Q&As, product demonstrations, behind-the-scenes event coverage, and games and challenges. To figure out what’s right for your brand, brainstorm three to five different types of live videos you might want to create.

Here are some tips to get you started:

No matter what industry you’re in, your brand can generate content that’s conducive to Facebook Live. Keeping in mind that imitation is the sincerest form of flattery, peruse the social network to find inspiration from other brands that are already livestreaming.

Here are two examples to get you started:

In February, Dunkin’ Donuts gave users a “never-before-seen look” inside its test kitchen, explaining how the company brews its most popular coffee beverages and what goes into making a donut cake (over 110 donuts!). The video now has over 38,000 views, 1,400 comments, and 4,000 likes.

Tastemade, the food and travel video network, hosts live videos for #FoodArtFridays, giving viewers a glimpse into how it makes beautiful and delicious treats. For instance, this “Live Latte Art” video lasted a whopping 51 minutes (Facebook caps Live videos at 90 minutes), all while the artist took suggestions from the audience about what to create.

“In our view, this is the early days of really understanding what works well on this particular platform and style,” said Oren Katzeff, Head of Programming at Tastemade. “This is not unlike other opportunities that we’ve had as a company to entertain and delight our audiences on new platforms.”

In addition to demonstrations and behind-the-scenes showcases, brands have also used Facebook Live to broadcast presentations and conferences, give quick advice related to their niche industries, provide access to red carpet events, and pull back the curtain on glamorous parties. The opportunities are endless; it’s simply about knowing what kind of content your audience enjoys and then adapting it to a live format.

It’s a good idea to publish at least one post with the time and date of your broadcast before you go live. In fact, this is the number one tip on Facebook’s list of advice for using Live; they say that a day’s notice is the perfect amount of time. This helps generate anticipation for your video and can boost the number of people who tune in when it’s go time. Facebook also recommends reminding your audience to tap the Follow button on live videos so that they can get notifications the next time you broadcast.

Additionally, promoting your event ahead of time is about to get a whole lot easier. Soon, broadcasters will be able to pre-schedule the time they go live and then create “waiting rooms” where people can hang out and wait for the livestream to start. This is great news for brands, as it will likely boost live attendance and interaction. 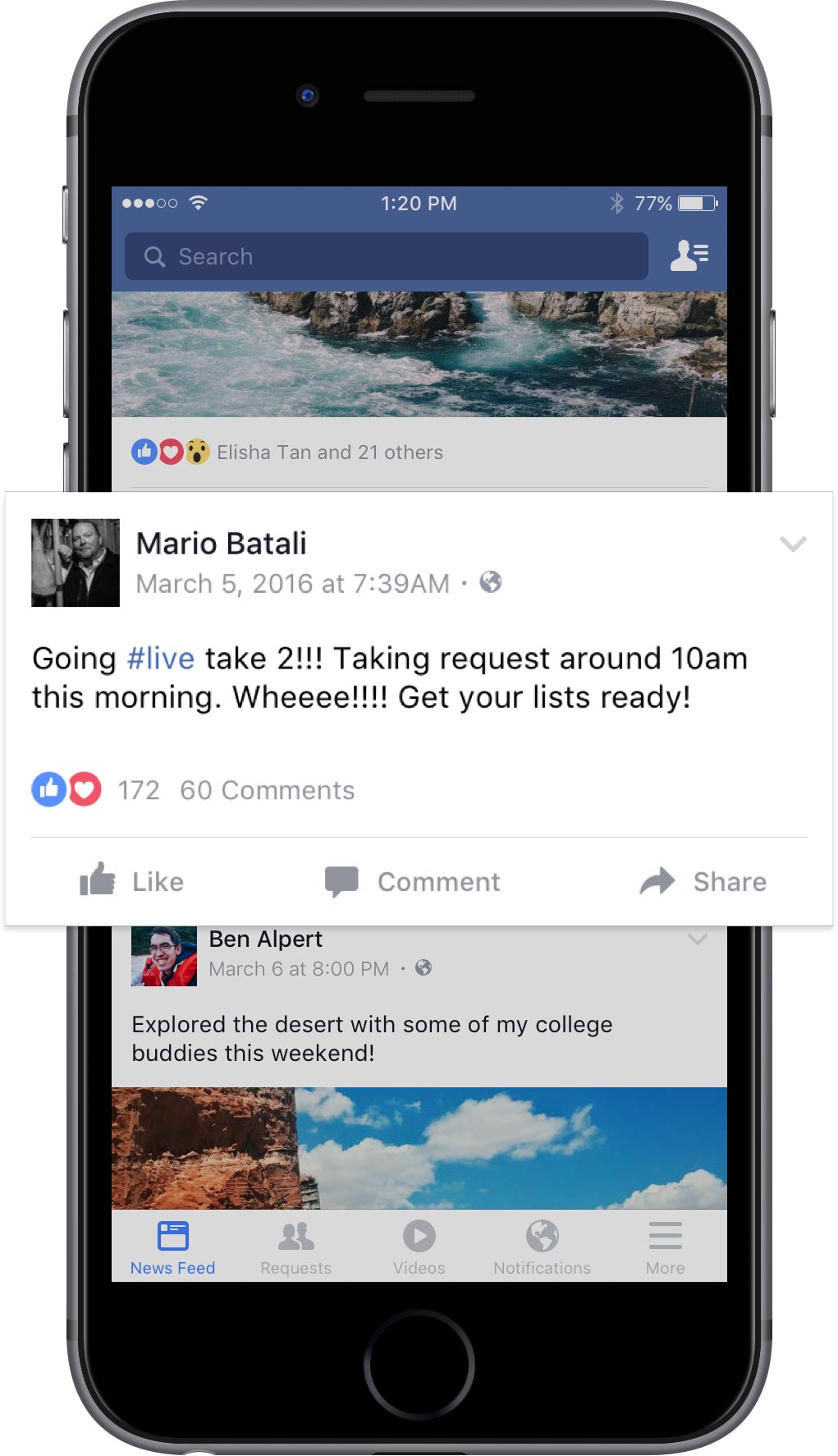 You can also use Facebook’s interest-targeting capabilities to boost the reach of your announcement, ensuring that more people who fit your target demographic see your live content. Lastly, if you have a strong following on other social channels, like Instagram, Twitter, or Pinterest, consider cross-promoting your upcoming broadcast there as well.

For example, Dunkin’ Donuts promoted its behind-the-scenes kitchen tour with a clever non-Live video a day in advance. And Martha Stewart released a post a few hours ahead of time to promote her Live Q&A video about cleaning and organizing your home.

Set Up the Right Equipment for Your Facebook Live Video

At first, Facebook Live video was shot exclusively on mobile, with support for iOS and Android. Facebook has since made the Live API publicly available, which means that broadcasters can now livestream from standalone cameras and even drones. They can also mix multiple video and audio sources and incorporate special effects – all while livestreaming.

That said, don’t worry too much about shooting with a top-notch camera; people are used to seeing live video filmed on mobile, and the DIY feel is often part of the appeal. At the very least, make sure that your sound and lighting are good enough for people to enjoy the video and stick around to watch the whole way through. Pro tip: Do a quick non-live test video on your mobile phone to check these technicalities.

Often, the narrator moves from one place to another, so a tripod isn’t necessary. But if it’s a livestream where the speaker or subject stays in one place, you might consider using one to stabilize the camera.

Finally, and perhaps most importantly, make sure you have a strong WiFi connection and a good 4G signal (in case your WiFi suddenly goes out). Also, double-check that your iPhone or Android battery is fully charged and that you have additional batteries for backup.

Designate Someone to Monitor Comments

If you have a large audience tuning into your live video, it can be difficult to catch every comment coming in, and you might miss a great opportunity to interact with your viewers.

With a tool like Sprinklr, you can make sure someone keeps an eye on all of these interactions and automatically routes them to the appropriate person. For instance, some comments might be shared with the presenter so she can address them live, while others are passed along to a customer service representative.

Facebook Live: A Backstage Pass for Customers, A Huge Opportunity for Brands

Facebook Live may seem intimidating at first, but with careful planning, your brand can quickly master the art of live video. Start simple and run through the items in this article each time you get ready to broadcast. As you get the hang of it, you can experiment with different topics, formats, and distribution strategies.With Facebook’s built-in audience of over 1.7 billion users, brands have the potential to master new marketing techniques and broaden the reach of their content. By giving customers a one-of-a-kind experience, they have an opportunity to spark new relationships in real time and engage viewers even after they’re done recording.