Tinder, the dating app that made “swipe right” and “swipe left” part of our everyday verbiage, is winning the hearts of users and advertisers alike. The app’s user base of 50 million, 85% of which are between the ages of 18 and 34, has caught the attention of brands looking to connect with millennials through unconventional marketing. Aside from offering direct access to a vast audience of millennials, there are a couple reasons Tinder is a compelling channel for marketers. But how do you advertise on Tinder?

First, companies are advertising on Tinder through programatic digital ads. Companies are able to get their brand in front of users, though users may be reluctant to click a paid ad that is less than engaging. By using creative Tinder marketing strategies, brands have been able to engage with users outside of traditional ads with greater success.

Second, brands that advertise on Tinder through fake profiles have users’ undivided attention. Once a user swipes right, the campaign occupies his or her entire mobile screen, and that’s all they’ll see until they swipe left or tap the “X” icon. This is a more focused user experience than those offered by most of the other major social platforms.

Here are seven brands that have implemented clever Tinder marketing campaigns––and what you can learn from them.

1. Ex Machina: The Robot that Stole Hearts at SXSW

Next time you swipe right, don’t be surprised if things aren’t what they seem. Male attendees at the SXSW festival matched with a beautiful 25-year-old woman named Ava only to discover, after chatting back-and forth for a while, that Ava was a robot whose Tinder profile was created to promote the film Ex Machina, which premiered at the festival. 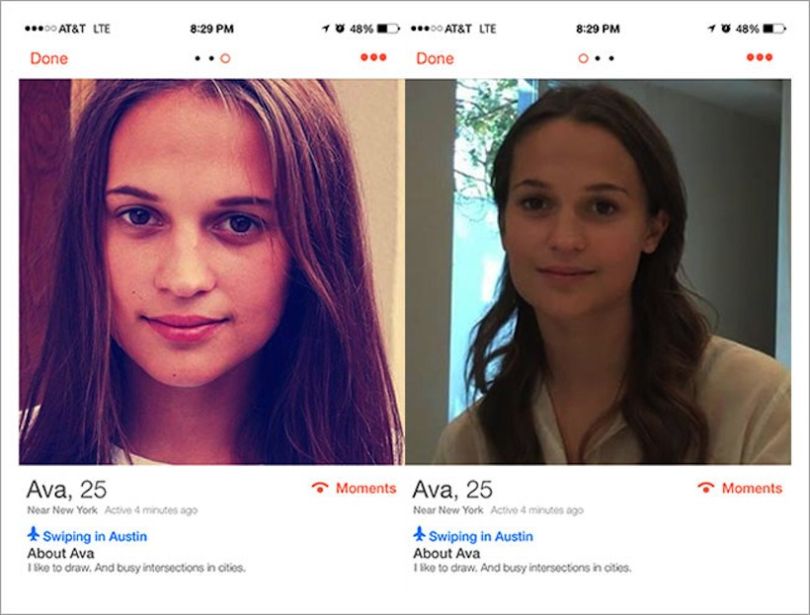 The big reveal happened following a bit of friendly banter, when Ava’s suitors were directed to her Instagram profile promoting the film.

Top Tip: This campaign stood out because it fooled users into thinking they were chatting with a real woman, whereas most other Tinder marketing campaigns have been upfront about the fact that they’re ads. While this technique will likely drive high engagement rates, a brand also risks annoying users who thought they had a chance at a real date; some might feel like the campaign wasted their time.

If your brand decides to explore this type of campaign, you could offer a promotion or reward following the big reveal so that users feel like they’ve gained something in exchange for their time.

2. Domino’s: Who Needs a Date for Valentine’s Day When You Can Have Free Pizza?

Domino’s turned up the temperature on Valentine’s Day with their Tinder campaign, which allowed men and women to swipe right for the chance to get free pizza and discounts. The brand engaged hungry suitors in pun-filled Valentine’s conversations and then sent tasty rewards to the best ones. 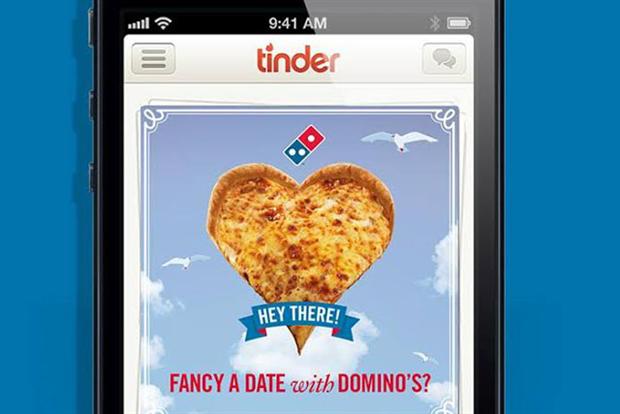 According to Iris Worldwide, the campaign resulted in over 700 Tinder matches and a potential social reach of more than 200,000. The reason this Tinder marketing strategy worked is that, even though it was obviously an ad, the content fit perfectly within the context of Valentine’s day, and the brand engaged the app’s singles in such a way that made them feel like it truly understood their V-day dating woes.

Top Tip: Make sure your profile image is bold and simple enough to be understood at a quick glance. Users are accustomed to speedily swiping through profiles, so you’ll only have a few seconds to communicate your message and grab people’s attention.

The Atlanta Hawks created memorable experiences for basketball fans at a recent game by hosting Swipe Right Night, where the team encouraged fans to swipe right for a chance to win access to special “Love Lounges” filled with Tinder users interested in meeting other singles. Additionally, according to the Washington Post, the team promised to have some of Jezebel magazine’s “Atlanta’s Most Eligible” single people participating. 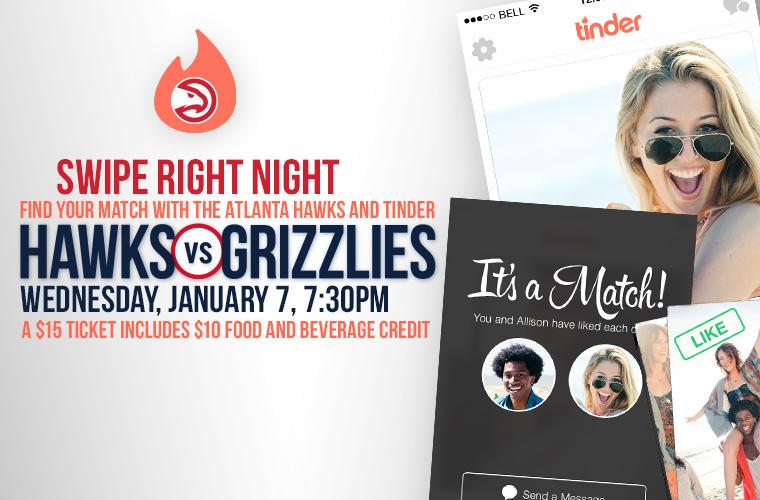 Bud Light is the latest brand to launch an ad campaign on Tinder, and they’re the first ever to test video ads. During the campaign, users over 21 will see Bud Light videos promoting their next “Whatever, USA” party and encouraging users to swipe right for the chance to win tickets to the event, where they might even meet their next love interest over a beer.

Top Tip: Take a cue from Bud Light and the Atlanta Hawks and show users that your brand has their best interests at heart. These brands used Tinder to create enjoyable real-world experiences that they clearly put a lot of thought into, connecting people with common interests in a fun setting. These campaigns embody the idea of putting your customer first.

4. The Mindy Project & Suits: Match with Your Favorite TV Characters

If there’s any TV character that truly gets the struggles of being single, it’s Mindy from the hit series The Mindy Project, so the show’s Tinder campaign fit perfectly with its personality.

Fox Entertainment partnered with Tinder to present characters from The Mindy Project, including Mindy and Danny, to Tinder users. The playful, funny profile descriptions, which appeared after a user swiped right, perfectly represented the personalities of each character. Tinder users who matched with either one of the characters were sent a message telling them to tune in to the next episode. 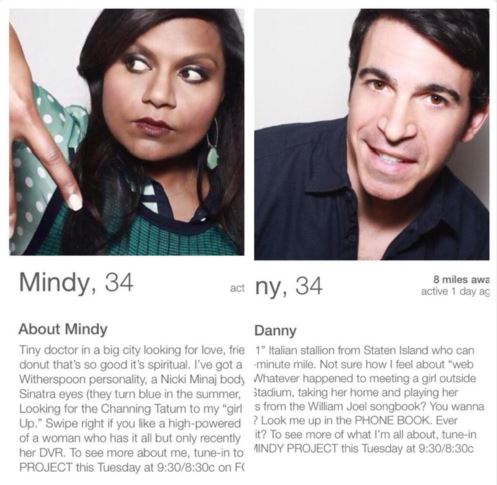 USA launched a similar campaign in mid-2013, setting up profiles to promote the third season of Suits. The campaign was intended to drive viewers for the July 16, 2013 season premiere of the show, particularly among younger adults (the app’s main user demographic). Users were prompted to match with either Suits law partner Harvey Specter or paralegal Rachel Zane, depending on their preference settings for connecting with men or women. Users that swiped right on a character’s profile got access to exclusive content from the show available only to Tinder users.

Top Tip: Make sure your Tinder marketing strategy is on-brand. The Mindy Project and Suits campaigns worked well because dating is a big part of both shows, and many Tinder users would be more than happy to match with Harvey, Rachel, Mindy, or Danny in real life.

5. Amnesty International: Raise Awareness about an Important Social Cause

For example, Amnesty International Australia used the network to raise awareness about forced marriages with a campaign launched on International Women’s Day. The nonprofit replaced profile pictures with downloadable images illustrating that oppressed women around the world still aren’t able to make important choices about their lives––the kinds of choices that many of us take for granted.

Here’s how Amnesty International’s Caroline Easter described the flow of the campaign:

“The campaign was centered around International Women’s Day with the Tinder images that Amnesty posted driving traffic to the Make a choice website. Here, we ran a quiz in which users were asked to make choices like marry for money or marry for love. A click on money revealed a new page that explained that in rural Pakistan many girls are sold into forced marriage. Data, including email addresses was captured on the site, and interested visitors were contacted to see if they would like to support Amnesty’s human rights work.” 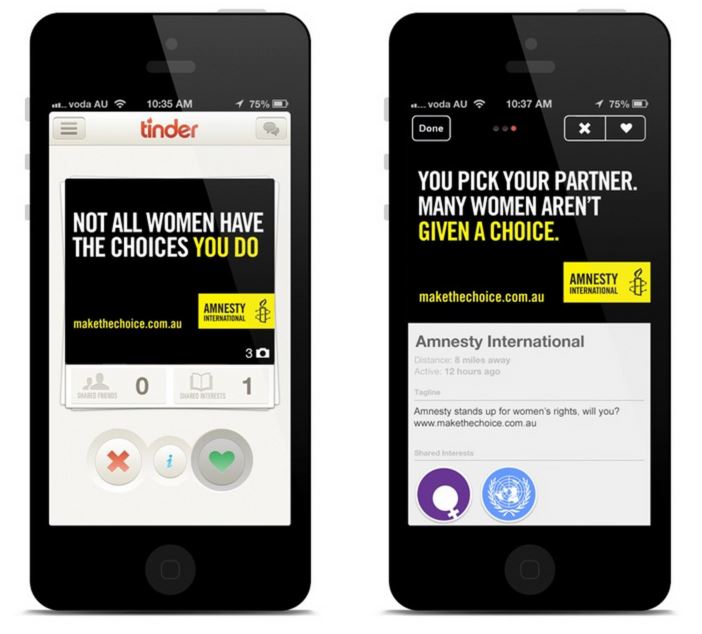 Top Tip: If your organization decides to advertise a social cause on Tinder, make sure the campaign fits within the context of the dating app. Amnesty International’s campaign links the cornucopia of choice that Tinder users have for picking a date with the complete lack of choice that many women around the world face when it comes to their love lives. Similarly, this campaign about sex trafficking by advertising agency Eighty Twenty and The Immigrant Council of Ireland  draws people in by appearing to be a normal Tinder profile.

But since Tinder ads still aren’t an accepted part of the everyday user experience, brands should create campaigns that fit within the context of the dating app and are driven by content that is informative, compelling, rewarding, and entertaining. After all, demonstrating that your brand seeks to add value to customers’ daily lives is an essential part of creating delightful customer experiences.

Also, take a lesson from The Gap’s recent guerrilla marketing Tinder campaign that backfired. The brand neglected to get permission from the dating app before launching their campaign, and their profile was swiftly removed. So don’t go rogue! Make sure Tinder has approved your campaign first. 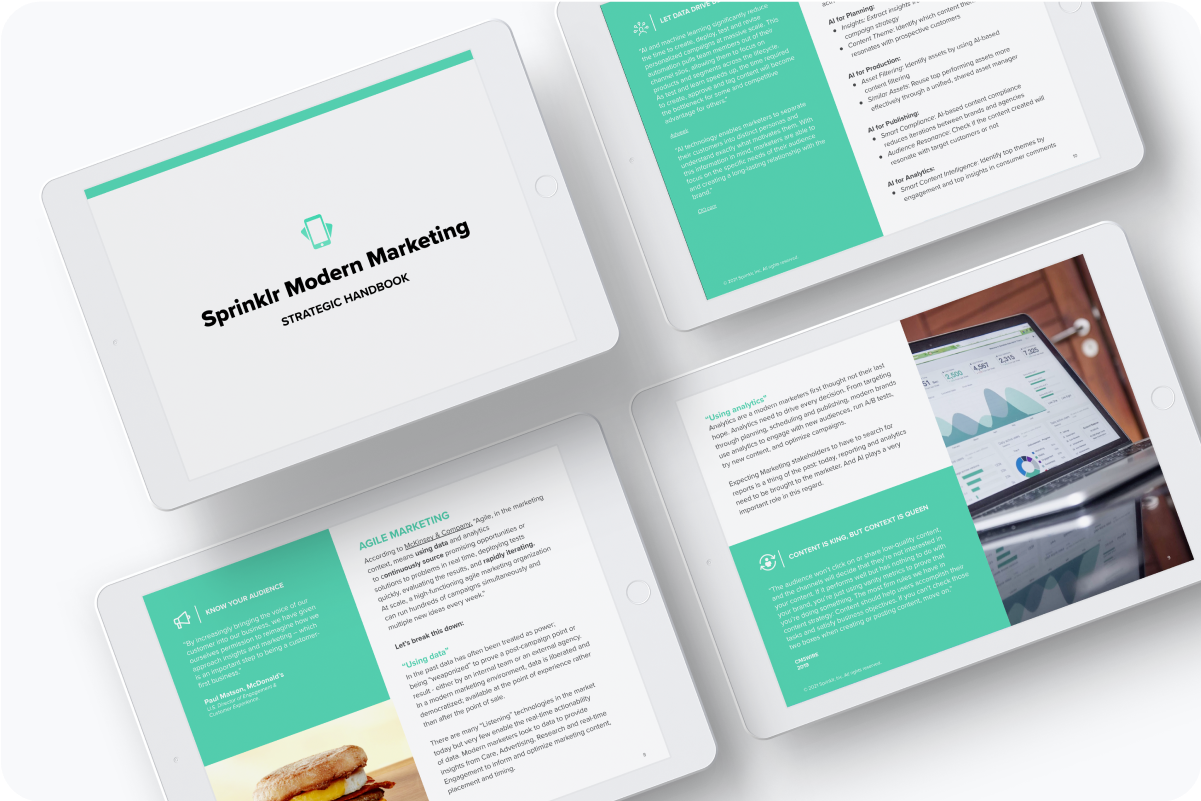