Build & manage an online community integrated into your Care strategy

Make decisions informed by proactive, AI-powered research, based on the most complete set of customer experience data.

Real-time voice of customer insights on digital and traditional channels

Analyze your content’s performance vs. competitors and best-in-class brands

AI insights from reviews & social: How customers feel about your products

Plan, manage & measure brand content across 30+ channels from one platform

Turn social into a revenue driver with a 1:1 chat-based commerce experience

Build and protect your brand’s reputation, and take action at every point in the marketing lifecycle.

Encourage, measure, and optimize employee advocacy for your brand on social

The only Unified-CXM platform for enterprises powered by industry-leading AI.

Ensure compliance and fuel reporting by securely storing up to 84 months of customer data.

Extend the impact of Unified-CXM by connecting to all of your most crucial third-party systems.

Experiment and learn in an isolated test setting that mimics your live production environment.

31 products. 4 robust product suites. All on the only Unified-CXM platform.

Real-time voice of customer insights on digital and traditional channels

Plan, manage & measure brand content across 30+ channels from one platform

Help customers learn from each other — and reduce agent workloads

You may still be holding onto the final days of summer, but the 2016 holiday season is right around the corner. The time to plan your social media holiday marketing campaigns has arrived in the blink of an eye.

Thanks to smart use of humor, creativity, and a solid understanding of the target audience, past social media holiday campaigns have created buzz and even gone viral. Social platforms have become users’ go-to channels to engage, share, discover and get inspired. In response, brands have moved toward holiday campaigns that reach customers on their own turf.

Brands have much to learn from the past holiday social campaigns that thrived, whether it be from their strategy or their execution. Some examples that can inform this year’s holiday season include: 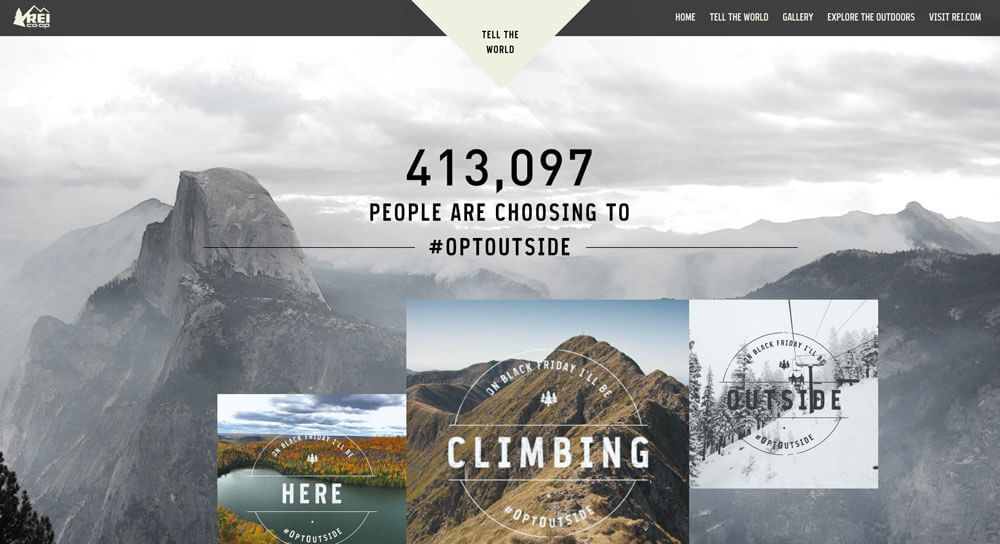 For the 2015 holiday season, REI chose to inspire its customers and craft a campaign that stayed true to its core value: getting outdoors.

With a letter to its 5.5 million customers, REI announced its decision to close the doors of its retail locations on Black Friday and encourage its members to spend time outdoors with loved ones, rather than shopping. Supported by an #OptOutside microsite, the campaign offered ideas of outdoor adventures and featured hiking trails for customers to explore.

#OptOutside represents REI’s intent to craft meaningful relationships with its customers and stand out against the competition. REI’s customer-centric approach to this campaign transcended typical sales-driven holiday campaigns.

Its commitment to the values of its business created a depth of loyalty and trust with its customers and set a standard in tying its brand to the bigger picture: real-world experiences. 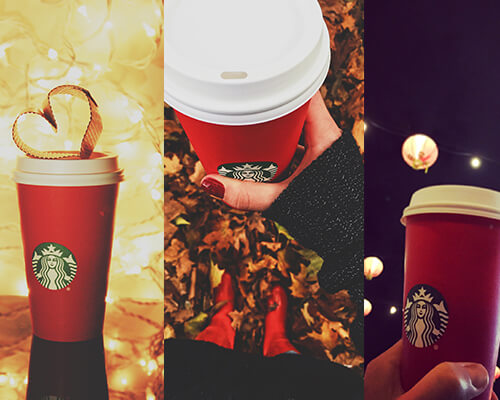 With their now-famous red cups, Starbucks has succeeded in crafting a long-standing holiday tradition that engages its audience and has them eagerly awaiting Red Cup Season.

In both 2014 and 2015, the brand hosted a holiday #redcupcontest on Instagram for its customers. Starbucks challenged them to share and tag photos of their red cups using the hashtag #redcupcontest, for a chance to win one of five grand prizes.

In the first two days following the contest’s announcement in 2015, a #redcupcontest photo was shared every 14 seconds on Instagram, gathering a total of 40,000 entries over the course of the contest.

With the  #redcupcontest, Starbucks not only mastered the art of competition but also tapped into customers’ creativity and incentivized social sharing with effective UGC marketing. UGC has taken off in recent years in response to customers’ growing preference for personal storytelling via social platforms such as Instagram, Youtube and Facebook.

According to eConsultancy, the key to a great UCG strategy is to effectively “create opportunities for conversation… instead of broadcasting.”

Starbucks leveraged customer excitement for a seasonal holiday tradition and used it to drive organic chatter about the brand and increase engagement. Brands aiming to follow in Starbucks’ footsteps must lock down the right user-generated content strategy to resonate with their target audience and allow great content to come from the customers themselves rather than from their brand. 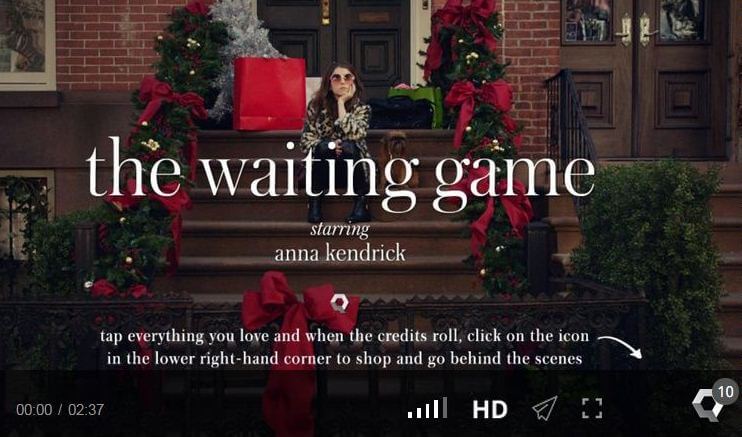 In 2014, fashion retailer Kate Spade launched a shoppable video campaign, “The Waiting Game.” In both a full two-minute format and in 5-second clips, “The Waiting Game” features actress Anna Kendrick, who is passing the time while locked out of her apartment. The video allows users to shop featured Kate Spade looks and access behind-the-scenes footage by interacting with the video as they watch.

Kate Spade was able to take “The Waiting Game” and turn a witty, branded ad into an engaging, interactive shopping experience that appealed to its quirky, female target audience.

To date, “The Waiting Game” has gathered nearly 500,000 views on Youtube. According to Sprinklr’s Social Business Index, the shoppable video boosted discussion on social around the brand by 30% in the month following its launch.

With “The Waiting Game,” Kate Spade took the basics of social engagement to the next level.  Combining video with an interactive component, Kate Spade draws a direct line between e-commerce and an engagement medium like video.

This also allows the brand to leverage customers’ impulses, in real-time, to buy as they watch products of interest on their screens. Looking ahead to this holiday season, brands can maximize results by finding similar ways to create clever, sharable content that simultaneously drives both customer engagement and sales. 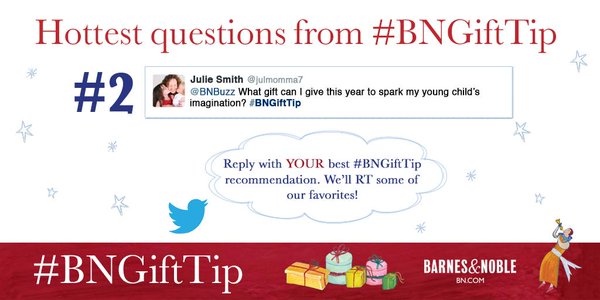 The Barnes and Noble bookstore turned to Twitter in 2014 to appeal to a growing number of hurried, last-minute holiday shoppers.

With the hashtag #BNGiftTip, Barnes and Noble encouraged users to request gift recommendations for their loved ones based on personality, preferences, or genre. This campaign not only sparked active social conversation between the brand and its customers; it also took a personalized approach by recommending specific books, games and toys based on individual rather than pushing a generic set of products.

With #BNGiftTip, Barnes and Noble aimed to “put the expertise you get in-store on social media,” arming customers with a personalized holiday shopping list informed by experts. Barnes and Noble dedicated 35,000 knowledgeable booksellers to the task of giving users customized gift ideas.

Combining personalization, engagement and customer service, #BNGiftTip is an extraordinary example to follow.

By adding a hyper-personalized component to their approach, Barnes and Noble seized the opportunity to cater to last-minute shoppers and help them when they needed it most. The brand was able to bring expert service to customers while also fueling the social conversation around their brand and personalizing digital experiences. This holiday season, establishing your brand as a source of expertise and excellent service will be crucial to driving sales and boosting customer satisfaction. 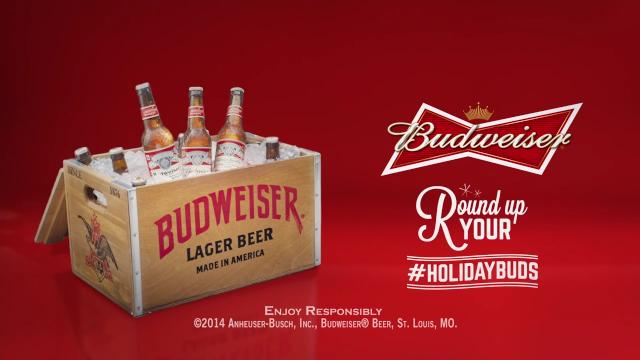 Budweiser launched its #HolidayBuds campaign in 2014 to “tap into the widely adopted-hipster aesthetic” that has sparked the rampant popularity of vintage Instagram filters—and to engage with Millennials.

Budweiser re-released limited edition, vintage packaging for its products during the 2014 holiday season from three distinct eras: 1918, 1933, and 1976, coinciding with the beginning and end of Prohibition, as well as the brand’s hundredth anniversary.

Budweiser encouraged customers to share their vintage-inspired products on Facebook, Twitter, Instagram and YouTube using the hashtag #HolidayBuds. To take it one step further, Budweiser also asked users to name friends they would want to share it with and then facilitated reunions with customers and their #holidaybuds, taking the online social experience offline.

Budweiser’s campaign sets an example in bridging the gap between online and offline engagement. It was also able to highlight an approach that would resonate with a specific target audience. This holiday season, rather than trying to appeal to a wide audience base, the key to success may be as simple as having a clear understanding of one key audience.

You can even get really smart about the way you reach this audience by using audience segments in your social media advertising.

Getting It Right This Holiday Season

Customers are embracing social media with alacrity, and it is impacting commerce more every day.

The upcoming holiday season will be no exception. If you want to get ahead of the curve, you need to tune into what’s worked and follow their lead. Locking down a strong campaign strategy now can make all the difference, and it may drive your brand campaign’s success in the coming months.

The brands above set an example and arose as leaders. With the right approach, so can you.

Boost your recruiting with social advertising

How can HR leaders stay ahead of the Great Resignation? One often overlooked tactic is leveraging social advertising for talent acquisition. Learn more.